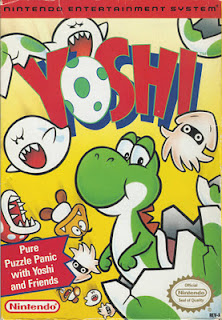 It's always interesting to see where now famous developers got their start. Yesterday, I reviewed Rare's Wizards & Warriors, a lovably bad platformer starring a wobbly knight. Today, I'd like to take a look at the game making origins of Game Freak, the developer known almost entirely for their work on the Pokemon series. Before they were the kings of the handheld gaming industry, Game Freak developed several puzzle games of varying quality. Their first game was Mendel Palace, a tile flipping action puzzler with some creepy, overly excited monsters. Their second was Yoshi, a simple puzzle game that began Game Freak's long standing relationship with Nintendo.

Yoshi was developed for both the NES and the Game Boy in 1991, a year after its titular green dinosaur hero made his debut in Super Mario World. It's definitely a little strange seeing an 8-bit Yoshi, but this isn't really a game that needs a high range of colors to work. The graphics are simple and the music is catchy. The borders that surround the play field are kind of ugly, but that's not an issue worth dwelling on.

The Japanese release of this game is titled Mario & Yoshi, which makes a little more sense since players control Mario (and Luigi in Versus mode) and not Yoshi himself. Yoshi is entirely a bystander in this game, watching players as they clear the puzzle field and only emerging from his lazy stoop when a stage is cleared so that he can get something to eat (after Mario punches him in the head, as usual.) The game is a falling blocks puzzle game, and in this case, the blocks consist of Goombas, Piranha Plants, Bloopers, Boos, and Yoshi egg shells. Players cannot control where the pieces descent from, but rather, can rotate the four-tile wide stacks of enemy blocks in hopes of lining them up. Blocks can only be cleared vertically.

Yoshi eggs drop in two parts; when the bottom half lands, players can begin filling it with enemies. Once a top half appears, you can enclose your prey and hatch a Yoshi. The higher the stack, the more points you earn, the bigger your Yoshi plumps up, and the more junk you send to your opponent's screen in Versus mode. It's a nice risk/reward system, since stacking an egg to the top of the screen will earn you a nice bonus if you can complete it, but doing so makes it much more difficult to navigate and survive the rest of the falling enemies, since the field is so small. This isn't a very deep game, since there are no combos and no horizontal line clearing, but planning how to properly deliver your eggs is pretty fun. 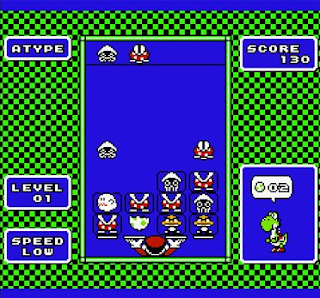 The single player game consists of two modes. Type A is an endless score attack mode, though the game doesn't save your high scores. Type B is a series of stages that end once you've cleared the whole field, rewarding you with a cutscene of Yoshi eating something. Type B is more fun, but unfortunately its difficulty caps somewhere around stage 6. It doesn't seem to get faster or harder after that, so there's not a lot of reason to keep playing. Multiplayer is a better time, though its options are limited. You can't select your music in Versus mode, and you can't set the number of wins required to end a game. Matches are won by either being the first one to clear your field or by having your opponents stack hit the top of the screen. There are handicap options to level the playing field between experienced and novice players that work pretty well.

Yoshi isn't a particularly difficult or deep puzzle game and winning against an equally skilled opponent is largely a matter of who gets a lucky block drop, rather than who makes a mistake. That said, it's still a lot of fun to sit down with a buddy for a little while and play through a few rounds. It's fun to see the simple, humble origins of a developer known for games with both universal appeal and ridiculously deep character growth systems. Game Freak got their start with puzzle games, but really hit their stride when they started making RPGs. Yoshi's charming enough to spend some time on even if it's not the best puzzle game on the NES.
Posted by surlaw at 11:27 PM