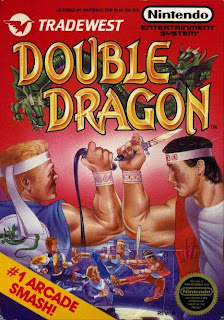 The beat em up/brawler genre dominated arcades in the late 80's/early 90's. It was the home of many great, original titles as well as a wide selection of popular licensed games, ranging from Dungeons and Dragons to Teenage Mutant Ninja Turtles to a variety of Marvel superhero games. 1984's Kung Fu Master, published on the NES by Nintendo in 1985 as simply Kung Fu, is considered one of the forefathers of the genre, but it was Technos' Renegade (1986) that set the standard for dozens of games to follow. It introduced the gameplay concepts of moving freely in both horizontal and vertical directions as you punched and kicked punks in urban settings that would serve as the foundation of the genre. It was Technos' 1987 follow-up Double Dragon that would turn the genre into a worldwide phenomenon. I've only played the arcade version a few times, so for this review I'll be taking a look at the 1988 NES port.

In Double Dragon, players control Billy and Jimmy Lee, two martial artist brothers that seem to run an auto shop. Gangs of thugs kidnap Billy's girlfriend Marian and it's up to the two brothers to punch everyone in sight to get her back. Players can punch, kick, jump, and headbutt their way to victory. As players defeat armed enemies, weapons are dropped which can be picked up and temporarily equipped to macho up. Weapons disappear once enemy groups have been vanquished. There are four visually distinct stages, each with its own end boss. Nothing in the game is scarier than the massive muscle man, Abobo. 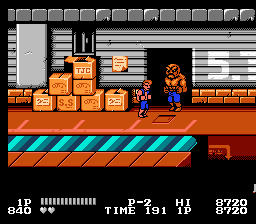 A major change between the arcade and NES versions is the addition of an experience system. When the game begins, you're limited to basic jumps and punches, but new, stronger attacks are added as you defeat enemies. This gives the game a fun sense of progression, though it does make the first stage feel a bit limited. Thecnos themselves would refine the idea of a beat em up with RPG style progression in 1989's River City Ransom, one of the high-water marks of the genre. Due to technical limitations at the time, the NES version also features fewer enemies per screen than the arcade version, and whenever more than one enemy is on screen, they'll both be the same type of enemy. 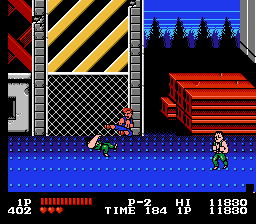 A big part of what makes this genre so fun is the ability to bust through with a buddy cooperatively, but sadly, the NES version lacks this feature. In two-player mode, players alternate each time one dies, but there's no way to play a co-op mode. A bonus mode has been added to the NES version that allows two players to fight each other one on one, featuring six selectable characters and bigger, more detailed sprites, with the exception of Abobo, who couldn't get any bigger or buffer. 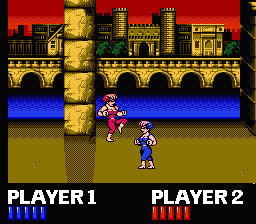 The NES Double Dragon is still a fun game to play, but the fact that you can't play it with a friend and can't continue really dampens the experience. The game has decent but not spectacular art design, outside of Abobo. The music is fast, exciting, and memorable, and it serves as a great foundation for the remixes composed for this year's Double Dragon Neon. The introduction theme that plays at the beginning of each stage definitely gets you pumped up for punchin' dudes and throwing barrels. For a game so early in its genre, Double Dragon has aged decently, but it's much more fun to get a friend and play one of its sequels (with the exception of the extremely sloppy Double Dragon III) or spiritual successors.
Posted by surlaw at 10:51 PM