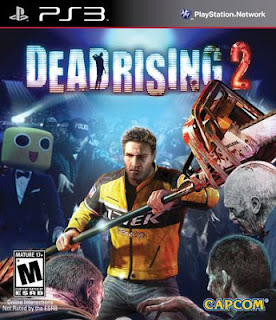 Dead Rising 2 is the second game in Capcom's open world, zombie fighting action series. The first game, inspired by George Romero's Dawn of the Dead, sets the player down in a mall overrun by zombies with a time limit in which to uncover the truth, rescue survivors, and live to tell about it. Dead Rising 2 follows a very similar path, this time putting players in Fortune City, a miniature version of Las Vegas that made it big after Vegas itself was destroyed. The result is a game that takes the concepts of the original and refines them, telling a more serious story while not abandoning the sillier parts of the first game.

The original Dead Rising stars Frank West, a photojournalist who finds himself deep in the middle of a zombie outbreak. Using his meaty fists and his photography skills, Frank searches for the cause of the outbreak in a world suddenly turned upside down. I really enjoyed taking pictures in order to build experience points; it was a welcome change from simply killing enemies or completing missions. Dead Rising 2 skips ahead five years and shifts the focus to Chuck Greene, a motocross champion with a daughter who was infected by a zombie bite.

In the world of Dead Rising 2, zombies aren't a new thing anymore, but are rather a very deadly fact of life. The actual walking dead are largely in containment, but the virus that turns otherwise healthy humans into them is still rampant. Enter Zombrex, a daily injection that wards off the infection and lets someone who has been bit continue to live a normal life, as long as they can afford it. Chuck's story opens with him performing in Terror is Reality, an extreme sports event in which contestants mutilate zombies through various means to compete for prizes. It's repugnant to watch, and sets the stage for just how different the world has become in the five years since the first game. Players control Chuck during the Terror is Reality event, and can later go online and play it over and over again. Not only are these missions pretty gross, but they're not actually very fun, so this portion of the game isn't really worth spending a lot of time.

Chuck needs the prize money from Terror is Reality to afford his daughter Katey's supply of Zombrex. Things go bad quickly, and the zombies held in the arena in that Chuck was competing in bust loose and run wild. All of Fortune City is quickly shut down and quarantined and Chuck is blamed for the outbreak. With three days to go until the military moves in and cleans up this mess, Chuck must prove his innocence, rescue other survivors, and find enough stray Zombrex to keep Katey healthy. 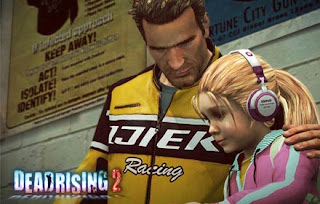 The time limit in this game is one of my favorite aspects of it. Players must carefully weigh whether they can afford to rescue a wandering survivor or whether that time needs to be spent following the main plot, which is lost if certain missions expire, or to spend that time caring for Katey. Once you level up and know the game well, it's possible to save everyone while completing the plot and keeping Katey safe, but for your first playthrough, you have to make some tough, time-based decisions. Even though the plot is linear, this element, together with the open design of the game's world, keeps things feeling very free.

During their adventure in Fortune City, players can punch, shoot, and drive into zombies using whatever objects they can find. The game's violence is gratuitous and contains a lot of slapstick moments, which doesn't really mesh well with the somber story of a man on the run trying to protect his daughter. The silliness of dressing in ridiculous outfits and putting horse masks on zombies fit Frank West's personality better than it fits Chuck Greene's, but Chuck is a better written character overall. Chuck doesn't have Franks photography skills, but instead has the ability to combine found items using duct tape and nails to build weapons ranging from useless to overpowered. You quickly learn which combos work best and are easiest to build, and since items respawn there's never really any reason to not combine the boxing gloves with knives and pretend to be Wolverine and the flashlight with jewels to make a lightsaber whenever you get a chance.

Throughout Fortune City players will encounter sidestories involving boss fights with resident psychopaths. Some of these villains have well written, tragic backstories, but for the most part are less memorable characters than the ones in the first game, while at the same time being more fun to fight. The most obnoxious psychopaths in the first game were a group of convicts who drove around in a truck causing trouble when you ventured outside the mall and would inexplicably respawn whenever you took them out. There's nothing nearly that annoying in Dead Rising 2. 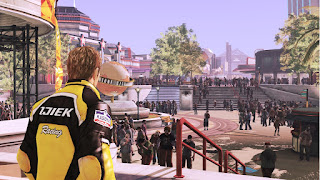 This game's supporting cast ranges from great to embarrassing. TK, the host of Terror is Reality, is a bombastic showman who's a ton of fun to watch. Every scene with this guy in it is solid. Stacey, the leader of a protest movement calling out the cruelty of America's treatment of the zombies, serves as a support in your safehouse who helps you find survivors. She brings an interesting element to the world of the story that sounds silly on paper but makes a lot of sense once you see what Terror is Reality actually is. Katey doesn't do a whole lot, but she's likeable enough that I made sure I'd save her no matter what. Chuck also meets Rebecca Chang, a cliche Sexy Reporter after the truth. She's not so good. Neither are the two twins showgirls/lovers that follow TK around. This is a pretty uncomfortable pair of fan service characters that don't service the game's plot at all. Yes, it makes sense to have flashy showgirls in Not Vegas. No, they don't need to give off a creepy incestuous vibe. It would also be better if female zombies didn't suggestively go for your crotch when attacking. I appreciate the game's camp value and its legitimate creepiness, but not so much its fan service creepiness.

Combat's mediocre and the boss fights generally aren't a lot of fun, but this game and the original are both somehow still really entertaining. Their worlds are very fun to explore, rescuing survivors feels great, and the characters are for the most part pretty charming. A lot of players took issue with the lack of a true sandbox mode, something that would later be added in the semi-remake/retelling Dead Rising 2: Off the Record, but the tight time limits are really a big part of the fun for me. Save points are spread out (though they're much more generous than the first game's) and time is your biggest enemy, and that combines to create a pretty exciting beat em up. 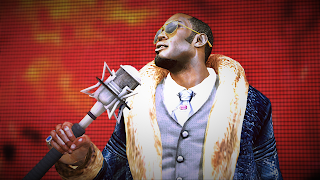 There are a few other parts of Dead Rising 2 that I really don't like, but nothing game breaking. I don't like the dead silence you get from text boxes in your safehouse while the other 90% of text in the game is voiced. I don't like having to play poker in order to convince certain survivors to join you. I get that it fits the Vegas theme, but it's extremely boring. I don't like how easy it is to break large parts of the game with combo weapons that take almost no effort to discover; they should be tucked away better. I don't like that there are achievements for visiting every shop/eating every food but no internal checklist telling you what you've already done. I really don't like how empty your safehouse feels compared to the first game, even though you rescue just as many survivors. I've got a lot of beef with the fact that this game's version of Overtime Mode, a mode that adds a couple more days to the game's clock and opens a new story line if you fulfill the right conditions, feels really tacked on and poorly written compared to the original's. I really hate the load times.

In spite of all of this, the game's still a ton of fun, and I enjoyed it enough to replay it a couple of times and I plan on playing Off the Record soon. It controls better than the first Dead Rising, survivor AI is far better, and I enjoy Chuck's story. There's a lot of sloppiness present, but Dead Rising 2 is good enough to rise above the junk parts. The game's campaign is fully playable online, with both players controlling their own version of Chuck, but I never had much luck finding partners to play with. It's still a great time on your own.
Posted by surlaw at 10:27 PM