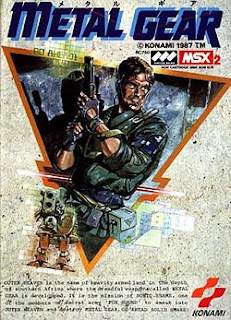 It's no secret that Hideo Kojima's Metal Gear games are probably my favorite video game series. I love sneaking around, I love the music, and I love the complete absurdity of their characters and writing. I've got a variety of issues with them too, but I'll get to those later when reviewing specific games. The good, the bad, and the weird that makes up each of these games truly makes them something special. It's amazing to see how far it's come when you take a look back at the original, 1987's Metal Gear.

Metal Gear is one of several major Konami franchises first released on the MSX computer system, along with Gradius, Contra, and Castlevania. This system never made much of a splash outside of Japan, and most of its better games were ported to the NES/Famicom, often with technical downgrades. Metal Gear was ported to the NES and released in North America with slightly worse graphics, much worse hit detection, harder gameplay due to sloppier level design, and major boss fights, including one with the titular giant robot, removed. The English NES release also has some hilariously bad translations, including guards that yell "I feel asleep!!" and your hero yelling "The truck have started to move!" 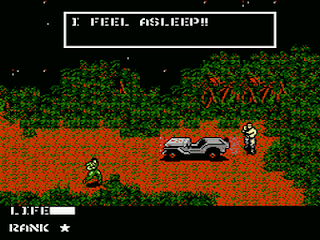 Europe received an English version of the MSX game, but with half of the game's dialogue removed so that it didn't need to be translated. Between this and the clunky NES port, there really wasn't a good way to play this game in English until 2006, when a retouched version was included as a bonus game, along with its sequel, on the special edition re-release of Metal Gear Solid 3: Subsistence for the PS2. This same version is available on the Metal Gear Solid HD Collection for PS3, PS Vita, and Xbox 360. The version included with MGS3 was the first one I played to completion, though I played and failed at the NES version plenty back in the early 90's. 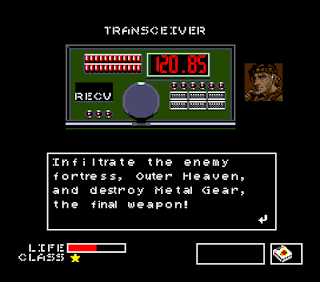 Players control Solid Snake, a member of the special forces group FOXHOUND, as he infiltrates Outer Heaven, a military stronghold that becomes a major symbol in later games. Here, it's a place where mercenaries are planning to take over the world using the nuclear missile equipped giant machine known as Metal Gear. Snake must get in, rescue missing FOXHOUND member Grey Fox, figure out what Metal Gear's deal is, and destroy it. His mentor and the leader of FOXHOUND, Big Boss, gives advice over radio, along with three other unmemorable supporting characters.

Along the way, he rescues Dr. Pettrovich Madnar, the scientist behind Metal Gear, a man who reappears in the next game and then returns inexplicably as a namedrop in Metal Gear Solid 4. Madnar is an expert in cybernetics and giant killer machines, as evident from the fact that he built both Metal Gear and a giant burly cyborg named Arnold (whose name is sadly changed to "Bloody Brad" in later releases). This is a fairly blatant Terminator reference, but not as blatant as the game's box art, which is a traced over picture of Michael Biehn as Kyle Reese in the first Terminator film. Aside from Madnar, there are plenty of other hostages to rescue. Doing so increases your total life and ammo capacity. 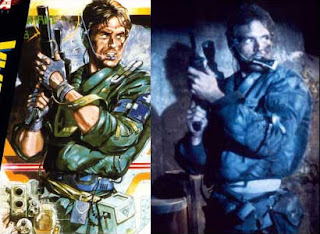 As Snake, players can hide from enemies, punch them in the back, or shoot slow bullets as he makes his way through several military storehouses to locate Metal Gear. The guards you encounter are pretty dumb, and can only see directly in front of them. In the sequel, they gain a cone of vision and can turn their heads, making them much more threatening. Snake encounters several ridiculously named villains as he gets deeper into the base; Shoot Gunner (Later called Shotmaker), The Machine Gun Kid, Fire Trooper, Coward Duck (Later Dirty Duck, even better) and Arnold/Bloody Brad. He also fights a Hind D helicopter and the secret leader of Outer Heaven, who, to no real surprise, is Big Boss himself. With a name like that, how can he not be the villain?

It's funny to see little things from this game that show up in later ones. The Hind D fight is remade in Metal Gear Solid, the Big Boss villain reveal is handled similarly to the Master Miller reveal in Metal Gear Solid, Big Boss's raving towards the end, including commanding Snake to turn the game console off, returns in the greatest part of Metal Gear Solid 2, and Fire Trooper is similar to The Fury in Metal Gear Solid 3. It's actually pretty fun looking back at this game having played the rest of the series, because it's clear from the beginning that Kojima had a lot of rough ideas for gameplay, characters, and themes that he would later refine, even if he obviously didn't know what the overall story of the series would become.


Visually, the game has nice environments but fairly simple character graphics. Metal Gear itself looks great. The NES version loses a lot of detail, but still looks pretty good. The main infiltration music, Theme of Tara, is one of my favorite bits of music in the series. Metal Gear could look better, as its sequel proves, but it's still a nice looking 8-bit game. 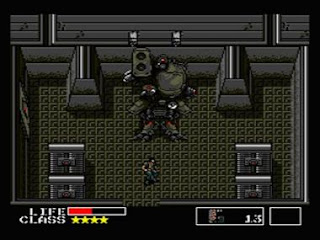 I still think this game's pretty fun today, and I honestly enjoy its gameplay over the first Metal Gear Solid. Metal Gear 2: Solid Snake takes everything good here and refines it, while adding more variety, a more complicated story, and more memorable characters. Snake has as much personality here as a Contra guy, but Metal Gear 2 makes him into the grouchy jerk I know and love. My only real complaint is that figuring out which walls are destructible is a miserable series of trial and error, as it was in The Legend of Zelda. The touched up port of Metal Gear 2 fixes this problem by making destructible walls sound different when punched. I definitely recommend playing this game if you're a fan of the later ones, but it's definitely not as finely tuned as Metal Gear 2.
Posted by surlaw at 10:35 AM