Review - The Legend of Zelda 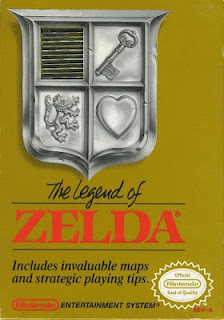 It's hard to review a game so iconic to the medium as The Legend of Zelda. Like Super Mario Bros., it wasn't the first game in its genre, but it did what it did so well that it cemented itself as the genre's cornerstone. It spawned one of the biggest franchises in video game history, even if said franchise has grown kind of stagnant, and offered a deeper, more real world than most games of the time. There's no argument that Shigeru Miyamoto and Takashi Tezuka created a game in 1986 whose impact is still felt today, but the question I want to answer is whether or not, in today's world, the game is still fun.

My answer is "yes." I don't think the original Legend of Zelda is the best game in its franchise (I prefer The Adventures of Link, A Link to the Past, and Link's Awakening over their predecessor) but it's still a solid experience, and I had more fun replaying it recently than I have with any of the series post-SNES installments.

The game is smaller in scale by far than later sequels and can be completed in five to ten hours (though there's also a remixed mode available once you're done with the original layout), but almost no time is wasted. There's no hours long tutorial sequence, and the game assumes the player can read a manual to figure out how to move and fight. The last couple of dungeons are obnoxious to find, but there's minimal backtracking, no fetch quests, and no slow, uninteresting dialogue to bog down the experience. The little bit of text you encounter is brief, sometimes confusing, and develops the world of Hyrule as a place where pretty much everybody's a jerk (See: The woman who sells you directions through The Lost Woods refusing to speak if you give her too little money and making fun of you if you give too much.) 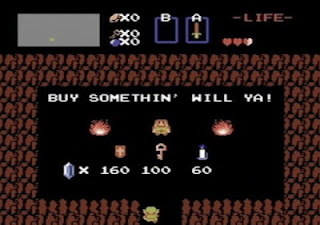 The game begins with Link (or whatever you choose to name the hero) dumped in the middle of a field with no weapons and no bearings. You find a sword almost immediately, but can skip it if you really want to. You can go almost anywhere in the world from the second you start, and can do a few of the game's eight dungeons out of sequence. Unlike later Zelda games, there's zero hand holding, and it feels great. Nintendo took a similar approach with Metroid, but it feels much more organic and travel is much less tedious here.

Hyrule, both its overworld and its dungeons, feels like a genuinely dangerous place. It's very easy to get overwhelmed by enemies, and combat is clunky enough to make otherwise simple enemies occasionally threatening. Zelda II: The Adventure of Link perfects this feeling, but it's largely abandoned in later games. You can only move in four directions, and the lack of diagonal movement makes certain fights tough. You can throw a boomerang in eight directions, but all it can do is stun normal enemies briefly and destroy fairly weak ones. As you find new equipment and more health upgrades the game becomes more manageable, but there are definitely some parts that can ruin you if you're not careful. In modern games, I feel that Demon's Souls/Dark Souls are the true successor to what Nintendo tried to do with the original Zelda.

Visually, The Legend of Zelda still looks nice, even if a few too many enemies are just palette swaps. The overworld maps are constructed well enough that you won't get lost too often, since there are plenty of landmarks along the way. All of the dungeons are palette swaps with new layouts, which is a bit of a shame, since even a change in the wall patterns/statues would add more character to them, but it's not a major issue. The game's music, in spite of there only being a handful of songs, is iconic and remains very hummable today. 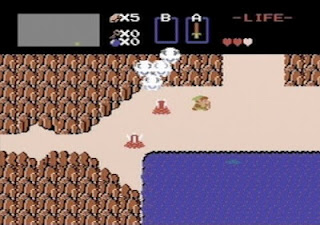 My only major beef with the game is that your cap for money is too low. You can carry 255 Rupees, but there's an important item that costs 250. If you're playing on an emulator or on the 3DS, you can use save states to abuse the game's gambling dens in order to make money fast, but on an NES, getting up to 250 Rupees through combat and exploration alone is a pretty big hassle. For some reason, limited wallet size has become a part of the Zelda series, with some games allowing you to upgrade your wallet later on. This doesn't make the game more rewarding or challenging; it just makes it obnoxious if you hit the limit while in a dungeon and then every subsequent Rupee you find is wasted.

I'd recommend either Link's Awakening or A Link to the Past for first time Zelda players way before I'd recommend the original game. It's a lot of fun, but it is clunky enough that it might turn off players that aren't familiar with the way these games play if they don't have any nostalgia for suffering through the merciless wilds of 8-bit Hyrule. Still, it's unmistakably an important game, and deserves to be recognized as such whether you personally find it entertaining or not.
Posted by surlaw at 5:48 PM