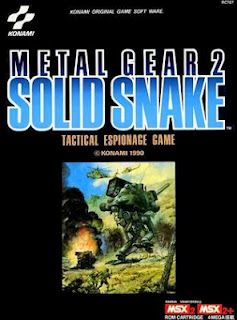 The first Metal Gear, released on the MSX in 1987, introduced a game world more focused on stealth and infiltration than on pure action. Hideo Kojima's 1990 follow up takes everything good about the original and refines it, giving players a much more modern experience that was ahead of its time. This installment would serve as the foundation for 1998's Metal Gear Solid, paving the way for a blockbuster series that manages to have mainstream appeal while still being quite bizarre and at times off-putting.

Metal Gear 2: Solid Snake was, like the original, released in Japan on the MSX. Unlike the original, there was no NES port (Metal Gear 2: Snake's Revenge on the NES is a completely unrelated game that wasn't made by the same team) and no English language release. It wasn't until 2006's Metal Gear Solid 3: Subsistence that people outside of Japan would get a chance to legitimately play this game in English, as both it and its predecessor were packed in as bonus features with this special re-release. Both games remain bundled within MGS3 on the Metal Gear Solid HD Collection for PS3 and Xbox 360. This port slightly rebalances some content, changes character portraits to be more in line with the art for the rest of the series, and allows you to detect destructible walls by punching them instead of just guessing at random.

After destroying Metal Gear and defeating Big Boss at Outer Heaven three years ago, Solid Snake is called out of retirement for the first time for one more mission (He gets called out of for One Final Mission again in both Metal Gear Solid and Metal Gear Solid 4.) Snake heads to Zanzibar to rescue Dr. Marv, a scientist working on a new fuel source. Assisting him are Colonel Campbell, who becomes a mainstay in the series after this, and McDonell Miller, a survival expert who gives you gameplay advice and occasional nonsense. Miller later shows up in Metal Gear Solid: Peace Walker and Metal Gear Solid V as a major support character. On site, Snake makes contact with Holly White, a young recruit who plays the inexperienced solider/potential lover role. Along the way, a mysterious voice on the radio aids Snake. The voice ends up belonging to Snake's old comrade, Gray Fox. 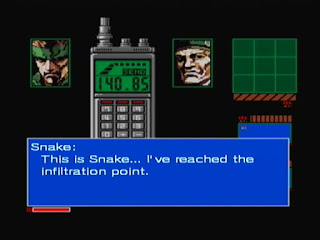 I'm sure more people who are reading this have played Metal Gear Solid than have played Metal Gear 2: Solid Snake. If so, a lot of this probably sounds familiar. While the two games are separate entries in the series timeline, Metal Gear Solid does feel like a remake of Metal Gear 2. Campbell (who knows more than he lets on) pulling Snake out of retirement, Gray Fox being the mysterious informant, and a young soldier out of her element who partners with Snake (Holly's an undercover CIA operative but she's more skilled as a journalist) are all major plot points of both MG2 and MGS. The overall plot is different, but enough core elements are the same that it will feel like deja vu if you've played one of them already. 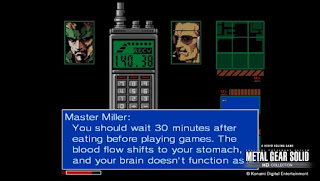 Plot points aren't the only things recycled between Metal Gear 2 and Metal Gear Solid. In both games, you have a puzzle that involves taking a shape shifting key to different temperature rooms to turn it into different keys (it's way less tedious in MG2), both games have a puzzle in which you need to identify and follow Holly/Meryl while she's disguised as a male soldier, both games ask you to look at the back of the box/manual to find a radio frequency (in the modern ports, Campbell gives you the frequency instead.) Even some boss fights are reused; both games take Snake's weapons away and pit him hand to hand against the pilot of Metal Gear, and both games have a battle inside an elevator against stealthy opponents.

All that said, there are a lot of unique puzzles that make Metal Gear 2 its own beast. There's a desert full of strange, squeaky sand, a snake that gets into your inventory and eats all of your items, the use of an owl to convince a really poor guard that it's now night time, and the most interesting puzzle in the game, a series of taps used by prisoners to relay information to you (in this case, radio frequency numbers). I am annoyed that the North American release does not explain how tap codes work, but once you know how to start solving the puzzle, it's actually really clever.

Bosses are, once again, wonderfully/terribly named. You've got Black Color (Black Ninja in later revisions), Running Man (another Schwarzenegger reference to complement the first game's Terminator references), Red Blaster, Ultra Box (later, sadly, renamed The Four Horsemen), Night Sight/Fright (an assassin who uses stealth camouflage, as The Fear later does in Metal Gear Solid 3) and Predator (renamed Jungle Evil, a hunter whose battle would be refined with The End in MGS3. Another Arnold reference sadly lost.) The game ends with a clever fight against Big Boss, who somehow survived Outer Heaven. He dies for good this time-- or does he? For some reason, Dr. Madnar, the scientist who built Metal Gear in the first game, also returns, and this time he tries to kill you for poorly rationalized reasons. Snake kills him in battle-- or does he? 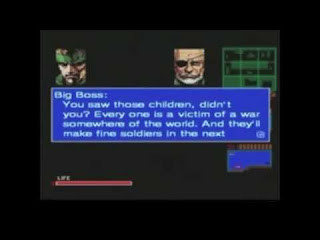 This game has a lot more dialogue and a lot more character to it than the previous Metal Gear, and clearly sets the stage for the rest of the series. They're never as exhaustingly long as the cutscenes in later games, but there is definitely a good amount of text here for an action game made in 1990. Big Boss is more interesting than the cackling madman he became at the end of Metal Gear. Here, he has built Zanzibar into a refuge for old soldiers and war orphans. There are children happily wandering all over the place in this game, some of whom give you helpful hints. He's trying to take over the world again in his own way, but Big Boss does actually feel more human than villains of this era typically do.

Graphics and story have definitely improved from the first game to this one, but while the music is higher quality, I don't find it as catchy as Metal Gear's. Gameplay is also much stronger, with more options for stealth; While Snake's iconic cardboard box first appeared in Metal Gear, it plays a bigger role here. Snake can now crawl around to make less noise and can slip underneath objects such as tables and trucks. Guards can be distracted by punching walls to make noise. A new radar system helps you track the movement of guards in adjacent rooms. 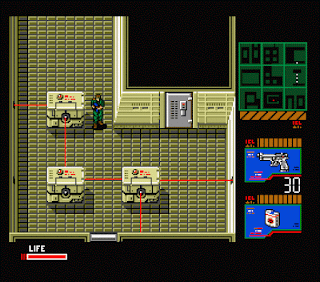 You have a lot of options here, and it's a lot of fun to just mess around and see what you can do. This becomes a hallmark of the series from here on out; while the first game is a lot of fun, it doesn't feel as open as Metal Gear 2. MG2 is also a lot more difficult, since guards react to noise and have a cone of vision instead of just being able to see what's directly in front of them. This adds to the challenge and makes game play more rewarding.

Even if you've already played Metal Gear Solid, don't let that deter you from trying Metal Gear 2, in spite of the many, many similarities between the two games. I personally prefer MG2 over MGS; its controls are much smoother, its backtracking less tedious, and its puzzles more fun. The villains are less memorable than those of MGS, but at least Big Boss is interesting. Besides, only one of these two games has poisonous hamsters that stalk you, and it's not Metal Gear Solid. I highly recommend picking up the HD Collection on PS3 or 360 and giving this game a shot.
Posted by surlaw at 9:38 PM