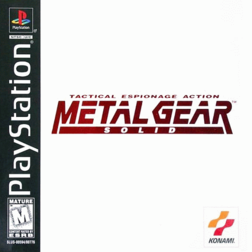 When Konami published Metal Gear Solid on the original Playstation in 1998, it marked the rebirth of a series that had laid dormant since 1990 in Japan and since 1987 everywhere else. It turned a niche series into a phenomenon, selling over six million copies and mainstreaming the idea of combining stealth and action that its MSX predecessors first embraced. It also marked a shift, for better or worse, towards a more cinematic style of storytelling in video games along with Final Fantasy VII and Resident Evil.

In many ways, Metal Gear Solid feels like a remake of Metal Gear 2: Solid Snake. This didn't matter a whole lot at the time, since the vast majority of players who picked up MGS had not played MG2, but it's interesting to look at historically. Many puzzles and characters are borrowed from MG2, though MGS does subvert some relationships. Mechanically, the two games are quite similar, only with MGS using polygonal graphics and 3D environments. You sneak around avoiding guards as you infiltrate a nuclear facility, using the environment to your advantage as you crawl through ducts, under tanks, and into cardboard boxes.

Control wise, I don't think MGS has aged well at all. Movement feels awkward and because of the tightness of the game's overhead camera you often find yourself shooting at enemies that are completely off screen. You spend more time watching your radar than the actual gameplay field. The 2D Metal Gears did it right by placing the camera high enough to never feel claustrophobic, while Metal Gear Solid feels very constrained by its camera. A big part of Metal Gear Solid's control awkwardness is the fact that you can aim your sniper rifle in first person but most other guns are fired from the game's overhead view at enemies you can't see, aside from on your radar. A later remake of this game on Gamecube adds a first person aiming mode that makes the game far easier but also a lot less clunky. 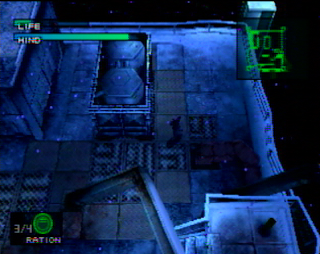 In this installment of the Metal Gear saga, Solid Snake is called out of retirement (again) to fight against his old unit, FOXHOUND, who has turned terrorist and taken over a nuclear facility on Shadow Moses Island. FOXHOUND consists of Vulcan Raven, a shaman with a gun bigger than his body, Psycho Mantis, a flying bondage master who passionately hates the border between fiction and reality, Sniper Wolf, a sniper who loves wolves, and Revolver Ocelot, a gunslinger with a ton of swagger. Leading the pack is Liquid Snake, twin brother of good old Solid. 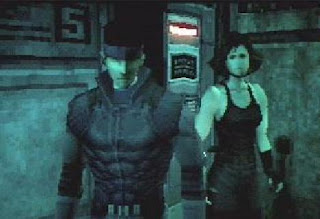 Turns out the Snakes are clones of Big Boss, whose genetic material has been used in gene therapy to enhance the soldiers who have occupied the island. Liquid holds the world ransom under threat of nuclear strike via a new Metal Gear, demanding the remains of Big Boss because that will somehow cure imperfections in his soldiers. Gray Fox also returns and causes trouble again, this time as an over the top cyborg ninja. Some fans would later look back on this game as grounded and realistic while complaining about the cartoonish elements in the sequels. Maybe it's just easier to take psychic leathermen at face value when you're playing a video game at age 13. 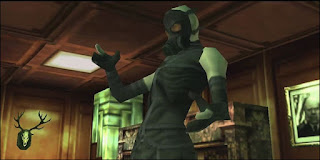 Aside from Ocelot, each boss presents an enormous, excruciatingly paced monologue about their lives after being defeated. This, along with the length of conversations Snake has with radio support Mei Ling when you try to save your game, really kills the pace of the game, which is otherwise pretty frantic. I complain about the length of cutscenes in later Metal Gear titles, but while they may be longer, for the most part none are as badly paced as the ones in Metal Gear Solid (a couple of the cutscenes in MGS4 are worse.) Most conversations happen on a black screen with character portraits while you're talking over radio, so there's not even visual appeal to break up the tedium of some of these scenes. This is a problem in the next two games in the series as well. As he makes his way through Shadow Moses, Snake meets Hal Emmerich, the scientist behind the current Metal Gear model. He got his inspiration to build weapons of mass destruction by watching lots of anime and falls in love with any woman who notices him and goes by the nickname "Otacon." In other words, he's The Ultimate Goon. Otacon becomes Snake's closest friend for the rest of the series. While he's a little annoying here, he's mostly fun to laugh at, aside from his excruciatingly long cry after Sniper Wolf is defeated. It's not until Metal Gear Solid 2 that he crosses the line and actually becomes repugnant.

Snake also befriends Meryl Silverburgh, Colonel Campell's niece. She is a new recruit who refused to go along with Liquid's insurrection and is thrown in jail. She plays the same role Holly White did in Metal Gear 2, acting as both a comrade in arms and a love interest. Their love doesn't last, though. After the events of Metal Gear Solid, Snake leaves Meryl to live with Otacon, his true love. They even raise a child together in Metal Gear Solid 4. 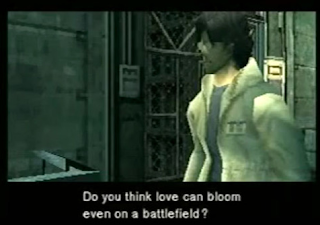 Dr. Naomi Hunter also plays a major role in the story. She is another radio support character, but unlike Mei Ling, she actually matters to the plot. She implants Snake with a virus that targets specific people, and has a tragic past with a connection to Snake and Gray Fox. Both she and Liquid spend far too long ranting about genetics. Genes are the theme of the game, and the question of whether someone can be more than their genes gets repeated over and over again. Liquid is mad at Solid because he got all of Big Boss's recessive genes while Solid got all of the dominant genes. Regardless of the fact that this means nothing and the two men are on totally equal footing, this somehow really infuriates Liquid, who it turns out is super stupid when it comes to understanding science. 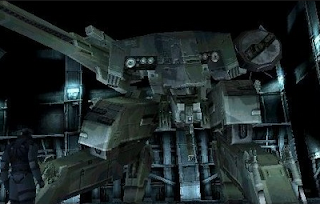 This game has the weakest theme out of all of the Metal Gear Solid games, because it asks a question that has an easy answer. Can someone be more than their genes? The answer is yes. We don't live predestined lives based on who our father is. MGS2's theme of information control, MGS3's theme of what it means to be loyal, and MGS4's theme of becoming obsolete in a changing world are more interesting to dissect. That, coupled with the slow, numerous cutscenes, really bring the overall game down.

The one part of the game that's aged perfectly is its soundtrack. It's quiet, moody, and fits the game's cold, snowy atmosphere perfectly. There's not a weak track in the bunch, and it really stands out. This was the first game where I ever listened to the soundtrack outside of the game itself! It should also be noted that while it's not perfect, this is one of the first games to feature decent voice acting. Otacon crying will probably make you cringe, but for the most part, everyone here is quite good, with Snake and Ocelot being the two standouts. Liquid's acting is ridiculously hammy but it fits his personality. Weirdly, when this game was remade on the Gamecube, Naomi's British accent and Mei Ling's Chinese accent were removed.

I certainly don't think Metal Gear Solid is a bad game, but its gameplay is imprecise and its story, when it plays it straight, isn't as strong as it felt when the concept of cinematic video games was new. When it goes for laughs, such as during Pyscho Mantis's displays of power, it's fantastic. It's a more interesting game than the very first Metal Gear, but it's weaker than the game which serves as its foundation, Metal Gear 2: Solid Snake. There's some really strong stuff here, and sneaking is always fun, but far too much of the game feels like a chore today. I recommend playing the Gamecube version if possible, though it's far harder to find a copy there.
Posted by surlaw at 11:13 AM