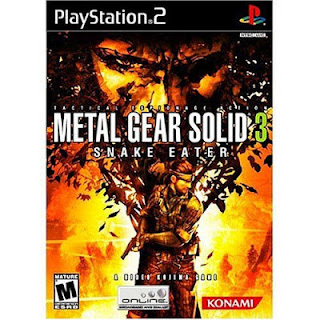 
Metal Gear Solid 3 is a radical shift from the previous game. Rather than Metal Gear Solid 2's futuristic world full of cyborgs and robosauruses, MGS3 is set in the mid 1960's, in a world with much simpler technology and a tone that's sometimes more in line with a James Bond movie than a Metal Gear game, down to the entertaining ridiculousness of its opening theme song. Its story has plenty of twists and turns, but is much more straightforward than the rest of the Solid series, and it doesn't often waste time dwelling on unimportant details. The prologue's introduction is much longer than it needs to be, but at least we don't have to sit through ten to twenty minutes of exposition after defeating bosses. 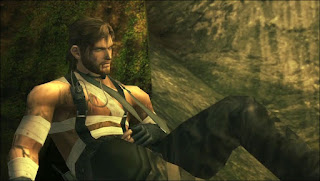 Players control Naked Snake, the man who will later be known as Big Boss, father of Solid Snake. Snake's mission here is to rescue a Russian scientist who is being forced to work on a nuclear tank, the Shagohad. The scientist, Sokolov, wishes to defect to the United States and ensure the Shagohad is never completed. Snake receives radio support from his commander, Major Zero, his former mentor and World War II hero, codenamed The Boss, and two supporting characters, Para-Medic, a movie buff who is happy to share both her pop culture and food knowledge with Snake, and Sigint, a weapons expect with a pretty great sense of humor.

Snake rescues Sokolov early on, but things quickly take a sour turn. The Boss betrays the US, horribly injures Snake, and hands nuclear weapons to Colonel Volgin, the leader of a rogue sect in the Russian military. Volgin uses one of these American-made weapons against his own country, nearly turning the Cold War into a hot one, and The Boss takes the fall for his action and is branded a war criminal. Once Snake has recovered from his injuries, he learns that President Johnson and Soviet Premier Khrushchev have concocted a way to make things right and prevent war from breaking out; The Boss must be killed, and she must be killed by an American. Snake is sent back to Russia with this new mission objective. 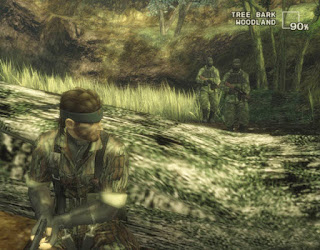 This installment of the series is by far the most personal to its protagonist. Instead of being sent in to defeat terrorists or mercenaries, Naked Snake is sent to assassinate the woman who helped raise him into who he is today. He doesn't believe that she would willingly betray the US, and seeks answers as he fights to find her and destroy the Shagohad, which Sokolov has again been forced to work on. Along the way, he receives assistance from an undercover agent, codenamed Eva, and runs afoul of the young man who will grow up to be Revolver Ocelot later in the series. Eva is totally a Bond Girl in design, but her character's sexualization works well thematically. Ocelot, meanwhile, is lovably inept in several scenes, favoring style over substance in ways that always end badly for himself. This game adds a lot more character to Ocelot than either Metal Gear Solid 1 or 2 do, and he's a lot of fun to watch. The almost theatrical quality about him that appears in this game plays a big role in how he behaves in Metal Gear Solid 4. 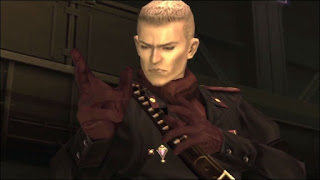 The Boss herself is an extremely well realized character, with love of country, comrades, and her disciple forcing her to make horrible sacrifices in the name of patriotism. It's rare to see well written female characters in video games, and The Boss is both well written and never feels exploitative. She's absolutely compelling and tragic without falling into the absurdity that the rest of the series follows. She's the last real hero the world has, and her inevitable death ends an age of heroes and leads to a world populated by the monsters and lunatics of the rest of the Metal Gear Solid universe. 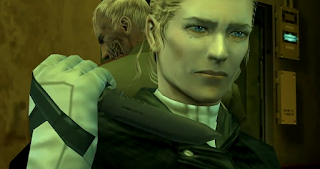 Of course, while The Boss herself is strong, rational, and pragmatic, she leads her own squad of monsters, each of whom fights using his most powerful emotion: The Pain, a man who controls bees through the power of dance and can also shoot bees out of his mouth. The Fear, a camouflaged hunter who moves like a spider. The End, an expert sniper drifting between life and death. The Fury, a cosmonaut who went into space and came back full of hatred for the Earth for some reason. Finally, The Sorrow, a psychic who died years ago but whose ghost still follows The Boss out of love and loyalty. This crew, the Cobra Unit, is ridiculous, often funny, and doesn't overstay their welcome. Each is fun to fight, but once the fight's over, Snake gets back to business. No time is wasted giving an explanation of how The Guy Who Spits Bees is a tragic story. 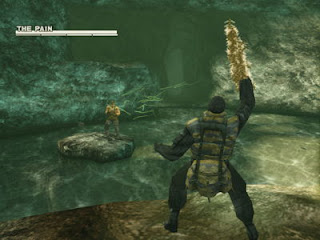 Gameplay follows the same basic structure of the rest of the series, but Snake does not have the over-powered radar system that he used to make evading guards in the last two games trivial. Players must be far more observant here, and have a wider array of tools with more specific, but less powerful, functions. Aiding in Snake's sneaking is a new camouflage system, in which players can select face paints and clothing options to help blend more convincingly into the environment. It's tedious to go between menus constantly to change your camo, but honestly, you don't need to have a perfect disguise index at all times. It's less annoying if you only switch once or twice per area.

Snake also has a stamina meter in this game that goes down as he gets hungry or gets hit by tranquilizers. Players can shoot down fruit or capture animals to recover stamina, and while this does slow the game a bit, I actually really enjoyed this system. The amount of life all around makes the world feel more real and less like a video game stage, even if it was still rigidly structured. You can also tranquilize animals and then throw them at guards, because hitting someone with a live fish, snake, or spider never gets old. 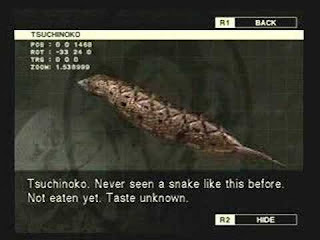 This game has the most options for approaching any given situation of any previous Metal Gear, and that's part of why I can still replay it so often. You can play it stealthily in a variety of ways, or can go in fighting, either with guns, your fists, or a fork. Snake's ability to grab guards and throw them to the ground, knocking them out instantly, is over powered, but it's fun and it's a nice way to get through the game without killing any soldiers. In fact, the encounter with The Sorrow actively chastises players for any deaths they've caused throughout the game. Not a whole lot of games take a "killing is wrong" stance, but non-lethal methods are always an option in this series, and I really appreciate that.

Love and loyalty are a major theme of this game in a more mature way than video games usually approach, which is kind of amazing since it's also a game with a guy who controls bees and an angry cosmonaut with a flamethrower. There's a love triangle between Snake, The Boss, and Eva, and not exclusively in a romantic sense. The strong, unwavering loyalty, even when forced to act in a way that would seem contrary, is powerful, and it makes these characters far more memorable than any others in the series. Volgin is entirely evil, and fairly shallow, but that's fine; putting too much focus on him would detract from the real point of the story. Kojima's writing and directing here is smart, as he paces himself far better than he does in the previous two games or in this one's sequel. Though, again, the game's opening does go on far too long. 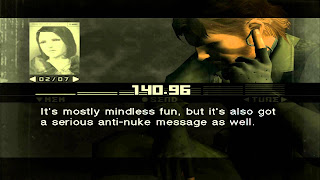 Without spoiling it too much, the final battle ends with an emotionally grueling scene that forces the player to take control of a terrible action that may have doomed the world. Forcing this on the player instead of making it a pure cutscene is brilliant, as it brings with it the remorse and guilt of doing something that you know in your heart is wrong. Within the game there's no choice, and thematically, it works. What it means to be a hero and a patriot, and how easily those words can be shattered, compels the story's action until the very end, whether you're watching a comedic scene or a very dark one. You do, of course, have the choice to refuse to act, and to turn the game console off.

Metal Gear Solid 3 is the most thematically consistent game in the series, along with being the best written, paced, and most fun to play. I honestly feel it's a near perfect game; otherwise, I probably wouldn't have cleared it 100% in three different versions. If you haven't played it yet, I absolutely recommend this game, even to people entirely new to the series. Since it's a prequel, there's far less story baggage to worry about, and its story more or less wraps up cleanly. 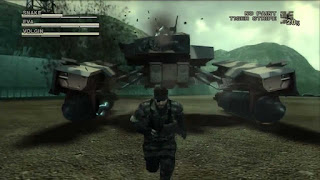 There are a variety of ways to play this game if you want to pick it up. The PS2 has both the original release and a special edition, MGS3: Subsistence, that adds in a new camera (the original version has a fixed camera, the special edition's is freely controlled by the right stick) and includes ports of Metal Gear and Metal Gear 2. It also contained the very entertaining first edition of Metal Gear Online, which is now sadly defunct. The Metal Gear HD Collection, released on PS3, Xbox 360, and PS Vita contains the definitive version of the game, even if it makes a few minor cuts, such as the removal of a bizarre interactive nightmare easter egg scene and the removal of the fun Snake vs. Ape minigame in which Snake fights the monkeys from Sony's Ape Escape series. There is also a version on the 3DS, with new controls and more streamlined interfaces but with a choppier framerate. Whatever your system of choice, don't miss this game.
Posted by surlaw at 3:55 PM