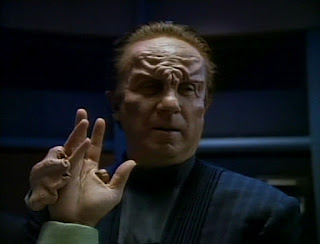 "An injury to Commander Riker during a reconnaissance mission threatens the prospects for first contact with a culture on the verge of warp travel."


As Riker struggles to escape The Planet of the Flipper People, Picard and Troi try to make a good first impression on one of the top Flipper Scientists. It's a shame the aliens aren't a little more dolphinish, but there's been worse.

I appreciate that this episode covers of wide spectrum of reasonable responses to first contact with an alien race. Some feel fear, some excitement, some anger, and some, of course, lust. One of the Flipper People (Played by Bebe Neuwirth) is a fangirl who loves nothing more than the idea of gettin' dirty with an alien, and if today's science fiction and DeviantArt profiles tell us nothing else it's that yes, this is the reaction plenty of people will have. We don't get to find out how it all works. That's probably for the best.

I also appreciate that we get to see an intelligently run diplomatic mission fall apart not through the intervention of god-monsters or possessed robots, but through human nature. There aren't any real villains here, even if
Krola is a jackass. No one's twirling mustaches, everyone just wants what they believe is best for their planet.

This episode is written by Marc Scott Zicree and is his only Star Trek episode aside from DS9's perfect Far Beyond the Stars. He does a great job with both the premise and its dialogue, and I really wish he'd have written more Treks.

I should probably also note that I like this episode a lot more than the Trek movie of the same name. 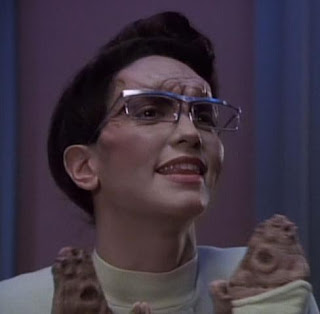