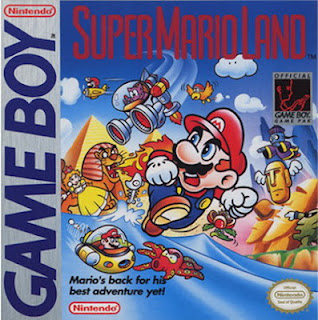 Almost all of the Mario Bros platformers are high quality games, but I've got a special fondness for some of the weirder ones. Without a doubt, my favorite Mario game is Super Mario Bros 2 (The good one, not "The Lost Levels") but I place Super Mario Land, which debuted with the Game Boy in 1989, pretty close to the top of my list. It's as well designed as any Mario Bros game but with a special coat of strangeness on top of it.

I remember the first time I played Mario Land. I was on a plane to California around Christmas time in 1990 and was seated next to another small young nerd. I didn't own a Game Boy at the time, and was fascinated. A portable Nintendo? Good lord, how could this be? He let me try his copy, and while I had fun, my strongest memory was the screen being almost impossible to see in the light of the plane. Eventually, I'd get a Game Boy of my own and play the game in a setting where I could actually see what was going on. I wasn't a huge fan of it at the time; most of my Game Boy time was taken up by Tetris and the terrible Teenage Mutant Ninja Turtles: Fall of the Foot Clan. Something about it just seemed off, and it wasn't until I dug out my old copy in the late 90's and played it again that I realized what a good game this was. 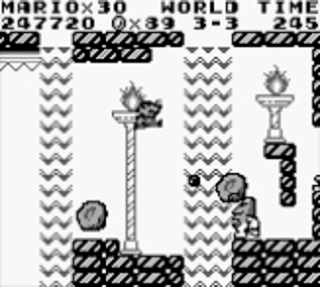 The basics are the same as most 2D Mario games. You run from left to right, jump on enemies, and eat mushrooms to grow. You can grab magic flowers to power up, but unlike most games, Mario doesn't gain the ability to throw fireballs by using them. Instead, he gains the ability to throw a Super Ball, the World's Best Bouncy Ball, a projectile that bounces off the ground at 45 degree angles and is useful for both hitting enemies and catching out of reach coins. There are goombas, koopas, piranha plants, and Bullet Bills as usual, but there are also exploding octopi, robots who throw their heads at you, living moai statues, and regenerating Jiangshi vampires that can only be stopped by a Super Ball. Also, the koopas' shells turn into bombs after being jumped on.

The cast of enemies and the setting really set Mario Land apart from other Mario titles. Instead of adventuring through the Mushroom Kingdom to rescue Princess Toadstool, Mario searches through Sarasaland to find Princess Daisy. Instead of the fire-breathing turtle king Bowser, the Big Bad is Tatanga, a purple space monster with a powerful starship. I don't think any of the enemies introduced in this game recur in any other Mario title, aside from a Tatanga cameo in Mario Land 2. Even Super Mario Bros 2, which some terrible people still decry for not originally being a Mario game, introduced enemies like Bob-ombs, Birdo, and the Shy Guys who would reappear in later games (In fact, the fire-spitting plant monsters that made their debut in Mario 2 appear in Land as well). Mario Land's only contribution to the rest of the series is Daisy, who appears in various Mario sports games. Instead of just thanking you or baking a cake or kissing Mario's bulbous nose, Daisy helps Mario hijack one of Tatanga's rockets after she's rescued and together the two of them blast off into space. She's clearly the best Nintendo Princess.


It's not just the cast of Mario Land that differs from other Mario games. This is game also includes two side-scrolling shooter stages that are more Gradius than Mario. In the first, you pilot a submarine and navigate through hungry sea monsters. In the second, you pilot a plane as you face off against Tatanga's armada. Even outside of the shooter segments, the physics are different from the main 2D Mario games, and the game does not pause when you take a hit. It's familiar enough if you've ever played a Mario platformer, but you'll be able to tell that something's different pretty quickly. 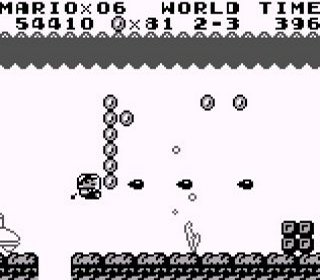 The music is also pretty different in style from the rest of the Mario games. Composed by Hirokazu Tanaka, it sounds more like Kid Icarus than Super Mario Bros, especially in stages 1-3 and the later parts of world 3. Mario music is almost always memorable, but I feel that Mario Land's especially stands out as quality work. This and Dr. Mario are the only Mario games Tanaka composed the soundtracks for, and that's a shame. I'd love to see what he could do in a Mario game with a modern system.

I'm a huge fan of this game, and my only real complaint is that it's quite short. While Super Mario Bros has eight worlds, each with four stages, Mario Land only features four worlds, each with three stages. Each world contains unique enemies along side the common goombas and koopas, and each has its own completely unique end boss, something many other Mario games fail to attempt. It generally takes me around 30 minutes to play through the whole game, but every one of those minutes is entertaining. After completing it, you can begin again with more difficult enemy layouts. As with Kirby's Dream Land, Nintendo proved quite skillful at delivering enough variety and a steady enough pace that the player never feels bored and nothing seems like a rehash. This is a lesson modern Nintendo could really stand to learn.

Maybe Mario Land's short length is part of its appeal, but I know I'd love to see more of it. Mario Land 2 unfortunately goes in a different direction and, while still a good game, doesn't capture the same beautiful weirdness of the original. Both are certainly worth playing, and both are available on the 3DS Virtual Console if you don't feel like straining your eyes over an original Game Boy.
Posted by surlaw at 6:18 PM