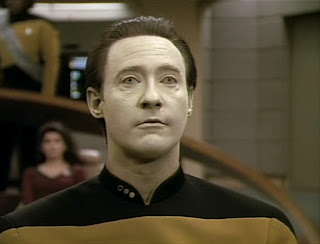 "The crew of the Enterprise wakes up after apparently passing through a wormhole, finding mysteries surrounding their blackout. Data begins to act suspiciously, prompting the command staff to wonder if he has been compromised."


A race of super xenophobic aliens concoct an elaborate scam to make the Enterprise crew forget they ever met them. This is a good episode about human curiosity inevitably leading us down paths we may not want to go without the "science is bad!" message that some shows end up promoting when doing that kind of plot.

The aliens mindwipe the crew and send them elsewhere after making arrangements that would guarantee that no one would be able to find evidence of what happened. Of course, evidence inevitably pops up everywhere. The way in which the crew notices these oddities is well handled, and Data plays the role of "The Only Man with the Truth" well. Even though it initially looks like it, this is NOT a Data Gets Possessed episode! Someone else does still get possessed, though.

There's a long scene explaining everything that happened that the crew can't remember and it's not handled particularly gracefully. I can't say how I would have shot it differently, but it doesn't feel ENOUGH like a flashback, if that makes any sense. I'm not saying it should have been shot in sepia tone, but as is it's too similar in style to the normal scenes.

This episode is the first appearance of Nurse Ogawa in actual continuity. She appears earlier in Future Imperfect as a nurse in Riker's fictional future, so it's a little weird seeing her show up in the "real" world looking the same age as she did there. That's a minor nitpick that ultimately doesn't mean anything, though. Patti Yasutake plays the character well and she's one of the better minor recurring characters. It's a shame she doesn't grow to full Miles O'Brien secondary character status, because I do like her and it's nice to have more than one character with speaking lines appear in sickbay.

Also: This one has Guinan trying to figure out how to play Picard's video game on the holodeck and Riker being a total kung fool. 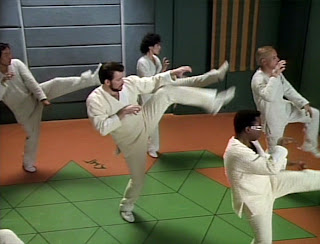