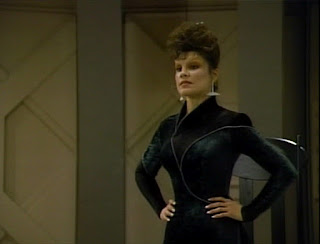 "The USS Enterprise-D responds to a distress signal from a science station on Ventax II, where the planet is in chaos over the return of a being who claims to be that culture's "devil"."


A sassy lady shows up on a crappy planet and claims to be their Satan, owed all sorts of bling as back tax for things being ok for the last thousand years. Picard, knowing for certain that all powerful god monsters like Q and that weird floating face monster can't exist, instantly knows that she's a con artist and takes her to court. I don't recall any devil's advocate puns being made.

This episode is entertaining but fairly stupid. When you've seen this many giant glowy space monsters, I'm not sure why you'd leap to the conclusion that this woman's clearly a fake. Q is even brought up by Riker, but Picard just rolls his eyes at the suggestion that this could be anything remotely similar. Turns out Picard's right, and the evil Ardra is just a jerk with a ship that beams her around and uses holograms to change her voice. The Enterprise crew hijacks her ship and Picard uses her powers. He makes all kinds of gross sounds while making himself look like the Klingon god of death.

I've always felt that this one was more of an Original Series episode than TNG, and The Star Trek TNG Companion confirms that it was actually a leftover script for the unfilmed Star Trek Phase II. It's pretty easy to see; aggressively disproving a culture's faith isn't really Picard's thing.

The best part of the episode is that it opens with Data playing Scrooge in a holodeck adaptation of A Christmas Carol. He should have kept that wonderful costume for the rest of the episode. 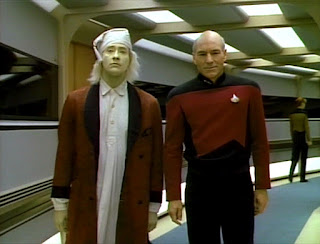