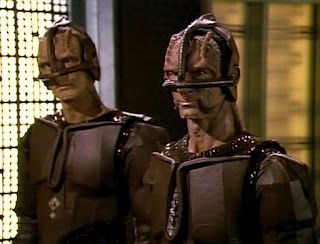 "When Captain Benjamin Maxwell apparently goes rogue, the Enterprise is ordered to apprehend him before his actions result in another war between the Federation and the Cardassian Union."

This is a big episode; it's the biggest role O'Brien's had in a story up to this point, it's the first appearance of the Cardassians, and it's just overall good drama. O'Brien's former captain is on a rampage in Cardassian space, attacking their transports in the name of justice. The Cardassians may or may not be using these transports to spread weapons through the sector; whether they are or not isn't actually important in the end. What's important is that shooting first and asking questions later isn't True Justice.

In retrospect, the rogue Captain Maxwell feels like a George W. Bush character. I'm sure there's a better, older analogue, but this is honestly the one in my head every time I watch this episode. From his Cowboy Diplomacy leadership to the whole trying to start up a war in a region where a war just ended a few years ago plot to the way he remembers his staff by ridiculous nicknames ("Stompie"), this guy just carries and air of W to him. Maxwell is a picture of a very particular type of leader, love him or hate him. Whether his ambitions are justified or not, he's doing it the wrong way.

In a lot of ways, this episode lays the ground work for Deep Space 9. Obviously the introduction of the Cardassians and elevation of O'Brien to a major player, but also through examining the dark threads found in a post-war society and looking at a Federation that is far from the utopia Roddenberry planned when launching TNG. I'm a big fan of TNG, but DS9 is my favorite Trek, and this episode feels like what DS9 would be with TNG's cast and I love that.

On top of all this, the lead Cardassian is played by Marc Alaimo, who would be cast perfectly as Gul Dukat on DS9. The character he plays here is similar enough that I think it's safe to assume that when he was called to play Dukat, Alaimo was just told to go back and do what he did here. He's one of my favorite actors on Trek, and brings a fantastic sense of both the charismatic and the sinister to his characters. His character has an unfortunately terrible beard here, which is thankfully ditched, along with the terrible looking helmets the Cardassians wear.

The Cardassians as antagonists work so much better than Klingons, Romulans, or Space Amoebas of the Week. They're complex characters, and their intents aren't usually as black and white as we normally see on Trek. This is obviously true to a greater extent in DS9, but it's still quite evident here. Alaimo as Gul Macet presents an opponent on equal footing with Picard, rather than just being a loud angry thing or cackling madman. Though often overlooked by fans, this is one of the better episodes of TNG. 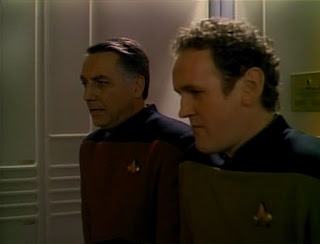