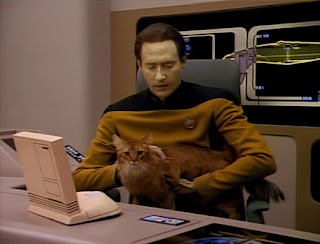 "Data records a day in his life for Commander Bruce Maddox, including observations on Chief O'Brien's wedding and the mystery of a Vulcan ambassador that apparently dies in a transporter accident."

This is one of my favorite TNG episodes. It chronicles a complete day in the life of Data and is told through a letter that he narrates throughout. In style, it feels similar to the Dear Dad episodes of MASH. It adds a lot of warmness to the characters that often gets swept aside by more grandiose plots, and while there is a running plot here about the Vulcan ambassador's "death," it's pretty minor compared to Data learning to dance, causing trouble with O'Brien's upcoming wedding, and just being a general goon.

Data's Day is our introduction to Keiko, who is having second thoughts about her wedding with Miles later that evening. It's a bad situation that Data manages to make worse before eventually trying to make things better. His attempts to help his friends out is endearing, and it's fun to see Data passionate about a mission (Save The O'Brien Wedding) that doesn't involve spacial anomalies.

In order to be a better wedding guest, Data goes to Dr. Crusher for advice on dancing. The scene in which she teaches him to dance is fantastically ridiculous and one of the high points of the episode. Data's creepy fake smile is unforgettable, as it's the scariest he ever looks. Between that look, Keiko and Miles' fight, and Data's attempts to insult Geordi to better understand comedy, there's a lot of uncomfortable little moments, but they're delivered in a great way that doesn't bring down the lightness of the episode. 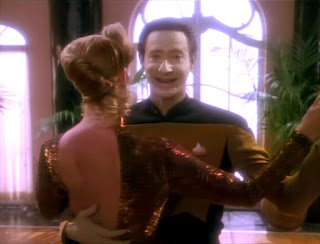 Also of note: This is the first appearance of both Spot the Cat and Mot the Barber, though apparently he goes by a different name here. It's never said in the episode itself. He'll always be Mot to me.
Posted by surlaw at 7:14 PM