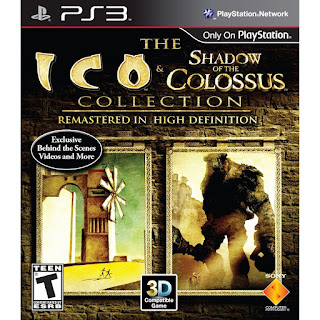 Ico and Shadow of the Colossus are two critically acclaimed titles designed by Fumito Ueda and released on the Playstation 2, now available as HD re-releases on the PS3, in digital form individually and on disc as a compilation. I've gone into detail about Shadow of the Colossus previously, and now I want to take a look at Ueda's first game. Ico arrived on the PS2 less than a year after its release and was one of the standout titles of its time, and, in an unusual turn, was released in North America before it came out in Japan. Now available in a remastered form, how well does Ico hold up eleven years after its original release?

First, I want to look at the game as a whole, judging content in a way that applies to both the original version and the re-release. After that, I'll go into details about what's been changed for the HD version.

The game's art style and atmosphere remains spectacular (though the hideous box art used for the original American release would suggest otherwise) and its story is simple but still carries a decent amount of emotional weight. The titular hero is a young boy born with horns who has been left in a mysterious castle as a sacrifice. He breaks free and finds Yorda, an ethereal girl who is also being held prisoner in this castle. Though neither speaks the other's language, Ico and Yorda form a close bond of trust and friendship. The two of them team up to search for a way out of the castle while Ico protects Yorda from shadowy monsters that try to drag her back to her prison. Outside of the opening and ending there's not a lot of exposition, but what's there is solid and effective. 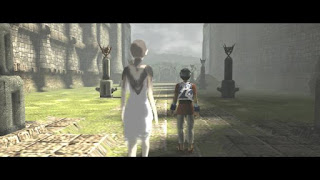 Haunted castles are certainly no stranger to video games, but Ico's setting is designed in a careful, artistic way that breathes a lot of life into what could otherwise be a cold, sterile environment. You're running from ghosts and pushing around strange contraptions, but the colors and lighting used still give the environment a sense of warmth. If you were alone, it might be a lovely place to explore at your leisure. Unfortunately, shadowy bird-things are trying to steal your buddy, so you have to keep moving.

While I've got nothing but praise for the game's art design, it's not that good as a video game. Ico is one of the first really mainstream "art games" released on a console, so I don't want to be too hard on it, but I was never in love with the way it played and it definitely feels weaker now than it did in 2001. You have no life bar and enemies, outside of the final boss, can't kill you, so there's no real danger from them. They grab Yorda and haul her off, but never too far away, and rescuing her from them isn't very tough. That should be fine since this isn't a game about going hand to hand against ghouls, but the number of enemies and the frequency of encounters serve to make many of the combat scenes feel like they exist only to pad out the game's length and to make it more of a video game. The final two fight scenes are quite good thematically, but most of the others just aren't interesting.

When you're not fighting shadow dudes you're pushing blocks, climbing walls, and flipping switches. The puzzles are mostly pretty simple, but they're entertaining. Some start to feel repetitive, but the game's not long enough to be a real issue; it can be completed in anywhere from 4-6 hours your first time through, and there's a trophy in the HD version for completing it in less than 2 if you're really dedicated. While the environmental puzzles are fun, I never got used to the way this game handles jumping. There's a floatiness to your movement that feels very different from most games (Shadow of the Colossus has similar but more refined control) and jumps that look impossible are sometimes actually very easy to make. There's a terrible jumping puzzle involving a water wheel that requires a type of precision found nowhere else in the game, and it's possibly the game's most frustrating moment. Interestingly, this puzzle was not in the original American release, but did appear in the European and Japanese versions. It has been added back in for the HD release. I wish it hadn't.

The camera usually situates itself in a way to make it easy to see where you're going, but you do have some degree of control over it, zooming with one of the shoulder buttons and panning with the right stick. This is mostly just for examining the details of your environment. Sadly, there's no way to invert camera axis, and that's something that always drives me nuts.

Ico's not a game that you play to fight monsters or perform cool jumps; its strength is in its atmosphere and its puzzles. I find that the rest has to be tolerated, rather than enjoyed. Aside from that, it's definitely a game worth trying, even if it can be frustrating. There were a couple of doors I had trouble seeing because of camera angles, a couple of jumps that I assumed I couldn't make but actually could, and the annoyance of having to hold down a button when Yorda was far away and listen to Ico's obnoxious calls as he shouts for her to come to him. I'm probably a bit off my rocker on this one, because his calls really irritated me, while something like Baby Mario's cries in Yoshi's Island don't bother me. Can't really say why. 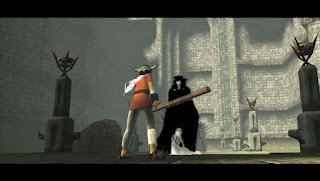 So if you've played and enjoyed the original version, is the HD remaster worth picking up? I give that a definite yes. While Shadow of the Colossus HD looks nicer than its original version and has a thankfully much more stable framerate, I wouldn't necessarily rush out to pick it up if I could still play the original disc. Ico HD, on the other hand, looks worlds nicer than it did on the PS2, and contains bonus features that will give fans reason to revisit it. It's hard to believe this game is a port of a first generation PS2 game, because it really looks beautiful. Part of that is its strong art design, but part of it is the great job Bluepoint did with the HD version's textures and lighting. It looks like a new version of the game, while Shadow of the Colossus HD looks more like an nicely upscaled version, and that really impresses me. And unlike Shadow of the Colossus HD, there are no weirdly stretched out objects in this game's menus. Everything looks right.

The disc version of the Ico/Shadow compilation contains a couple of documentary videos and some downloadable system themes. I don't know for certain whether or not these are available in the digital version as well. A 3D mode has also been added for players with 3D TVs, and I'm sure the dizzying heights of some of the climbing in this game would be nicely nauseating in 3D. In addition, this is a port based on the European version of the game, so certain extras that were never available in the North American PS2 version are available here that are unlocked on your second playthrough, including bonus weapons, some film grain filters, an option to control Yorda with a second controller, and the ability to translate her speech. It might not mean as much in parts of the world that always had these bonuses, but for North American players, it's definitely a cool addition. Unfortunately it also means having to deal with the terrible new waterwheel puzzle.

If you enjoyed Ico on the PS2, it's worth checking out the HD version. If you're new to these games, Shadow of the Colossus is probably the easier of the two to get into today. Both are worth playing, in spite of my almost complete distaste for Ico's combat and platforming.
Posted by surlaw at 9:54 PM