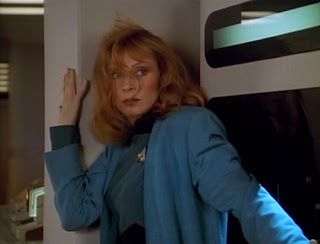 "Following an anomaly in a warp bubble experiment, Dr. Crusher finds that crewmembers are beginning to disappear, while she is the only one who seems to notice."

Wesley tries running some experimental science, stuff starts going wrong for the Enterprise. After his nanomachines nearly killed everyone in a previous episode, he should probably be banned from ever running experiments on the ship again.

Wesley is the boring Crusher in this episode. The star of this one is his mom, which is pretty rare. Dr. Crusher doesn't get a whole lot of episodes to herself, and unfortunately one of her star episodes is Sub Rosa. Remember Me is pretty far up the opposite end of the spectrum from that disaster, thankfully! This episode is a decent mystery with good acting and a creepy premise. Unfortunately the day is saved by Wesley once again being The Galaxy's Genius, but everything up to that point is good.

The plot begins with Beverly noticing that people are disappearing not only from the Enterprise, but from history itself. No records or memories of these people exist anywhere but in her head, and the rate of disappearances is accelerating. The galaxy itself begins collapsing, and pretty much everything that can go wrong does. Beverly struggles to hold her sanity together while she works to find a solution.

This episode is good, but it would be better if Crusher survived the situation by her own strength of will and ingenuity, rather than Wesley solving everything with the help of the creepy space monster "The Traveler." I think this guy is probably the worst recurring good guy in all of Trek. He looks stupid, he's dull, and his fascination with Wesley isn't good for anyone. This should have been an episode that showed Wesley getting taken down a peg, as his attempt to turn the flagship of the Federation into his personal science lab results in disaster. If an outside source had to save Beverly, it should have been Geordi or Data, to show that Wesley may be smart, but he's still just an inexperienced kid. But no, the senior officers are more or less left looking like assistants as Wesley Saves the Day.

I think a lot of fans' dislike of Wesley stems from premises like this. When he's allowed to be a normal teenager, or just another member of the crew, there's really nothing offensive about him as a character. When this young kid with no formal training shows those zany adults just how brilliant he is by coming up with solutions they never would have dreamed of, it's obnoxious. Blaming or disliking Wil Wheaton for this is extremely stupid, he does as good a job as anyone could with plots like these. The problem is that the writers (or, to go back to pre-production, Gene Roddenberry himself) thought that the audience would enjoy a Boy Genius character who can figure out problems like no one else. I'm glad that by the time we get to DS9, the main child character is a very organic, very human character. There's no real way to relate to Wesley in most of the plots that center around him.

As to this episode's pacing, I don't think the reveal about what's really going on should have been made so soon. It's shown about half way through the episode, and it kind of spoils the mystery behind it. I blame Rick Berman, again. His comment on this episode:

"That was a very interesting high concept episode. I thought it was possibly a little bit overly confusing. You're fooling the audience a little and I don't like to do that. They were looking at one world when, in fact, we were dealing with parallel universes and that was potentially confusing."

No, it is not a confusing episode. You just didn't respect the audience. 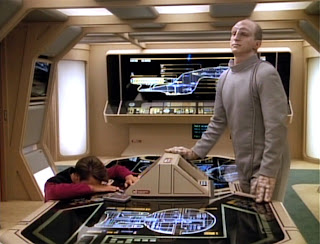