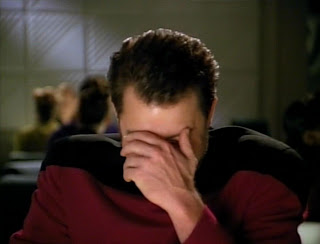 "The Enterprise crew discovers a young Human boy being raised by the aliens who killed his parents."

The Enterprise finds a dying ship full of soldier trainee kids with bad fashion. One of them, Jono, turns out to be human, so the crew pays attention to him and ignores the others kids after rescuing them. He makes loud wailing sounds, acts like a brat, and can't figure out how to use a spoon. His wails might be the most obnoxious thing in the history of Star Trek and it's hard to have any sympathy for something so awful. Dr. Crusher's scans show that during his life he's had a few broken bones, so the immediate conclusion is that his adopted father broke his arms for fun. Too bad the ship's counselor with the ability to tell when people are lying can't be any help here.

This episode is about whether or not the Federation has the right to take children away from their families if they suspect the child had been beaten. He has a case of PTSD from when his parents were killed when he was young, but as far as we can tell, his adopted father has treated him well enough since then, partly out of guilt of what happened and partly out of his society's norms. Yes, the kid suffered some broken bones in his life. We never learn the full truth of how. Maybe, I don't know, he got injured during his military training in a warrior culture?

This episode tries to ask hard questions, but the situation doesn't really work. It has a few good moments, but overall, they're drowned out by how intolerable Jono is and by how ridiculous it is that Captain Picard has no reaction to the Talarian captain admitting that he killed everyone on Federation colony. I can't get over how quickly that's ignored. There's also a scene where Picard flips out because Jono is listening to loud rock music. Picard isn't normally THIS much of a square. 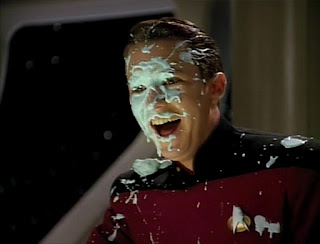 This is the first episode of the show written by Jeri Taylor. She had no experience with Trek prior to this, and would go on to write such gems as Sub Rosa, Descent, and Aquiel. Yes, she was involved in some good episodes too, but I'm not going to miss a chance to give a thumbs down to the person who unleashed Sub Rosa on us.
Posted by surlaw at 10:36 PM