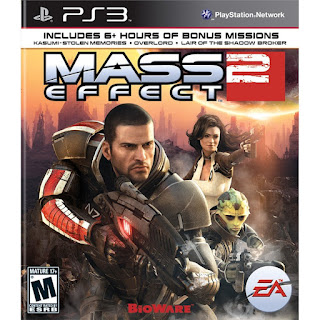 The PS3 version of Mass Effect 2 was my entry point into the series. I didn't have any interest in the first game back when I owned an Xbox 360, and the second game didn't really catch my attention when it was ported to the PS3. It wasn't until I played the demo of the third game and heard a lot of good word on it from some Star Trek goons that I picked up a copy of the second game. It's flawed, occasionally embarrassing, and has a couple of horrible DLC missions, but it also has very likable characters, a fun world, and some very exciting scenes. It's not a perfect game, and maybe it borrows a bit too heavily from prior sci-fi, but it works and is ultimately a very satisfying experience.

The premise of this installment is that a mysterious threat known as the Collectors are abducting human colonies at the behest of the Reapers, a race of machine-people with a grudge against and interest in humanity. The Alliance refuses to acknowledge the severity of the threat and spends its time hunting down the Geth, another machine-race connected to the Reapers, instead. Will you, as Commander Shepard, be able to save humanity in a battle against all odds? Armed with (a reproduction of) the Alliance's top starship, it's up to you to take down an enemy capable of taking out dozens of your buddies' ships with a single one of theirs effortlessly.

What you have here is pretty much the premise of the Star Trek: The Next Generation episodes The Neutral Zone (colony abductions by Trek's own machine race) and The Best of Both Worlds (everything else, minus Picard's fate). There was no way I could play the main plot without constantly thinking of this comparison, but it actually didn't bother me. A big part of this is probably due to the fact that Star Trek games tend to be horrendous, so it's nice to see what's essentially a big budget, well designed Trek inspired adventure. I'd be pretty excited to see Bioware try their hand at an actual, licensed Trek game using Mass Effect's gameplay as a base.

The gameplay of the series is split between combat missions and exploration/dialogue. The combat isn't spectacular, but it's certainly not awful. It focuses on hiding behind cover, popping out, and shooting space guns at enemies which, on Normal difficulty at least, have terrible aim. A true Star Trek experience. Outside of combat, you can explore star systems, scan for resources (which becomes tedious very quickly), and investigate/converse with other characters. The dialogue is generally well written, so the conversations stay fun throughout.

The game opens with Commander Shepard's ship being destroyed. Two years later, he or she (up to the player, I went with a female Shepard) is revived in a facility through a process that might as well be called cloning but everyone is sure to tell you definitely totally isn't cloning. She has been revived by Cerberus, a humans-first organization with a dark past led by the badly named Illusive Man. She agrees to work for them to stop the Collectors, in spite of past issues. Along the way, Shepard amasses a number of crewmates whose performance and survival is based on choices you make along the way. The loyalty of your crew, the amount of upgrades you put into your ship, and a few final decisions determine who lives and dies. 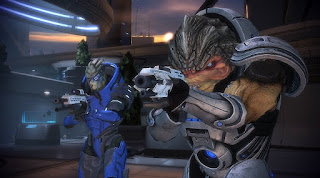 Aside from the fate of your crew, a lot of the choice in this game feels like an illusion meant to hint at a greater degree of freedom than is actually there. You can choose rational or aggressive stances in conversation (Called here Paragon and Renegade), but the majority of investigative questions you can ask are written in a neutral manner that makes the Renegade choices often clash horribly with the way your character speaks the rest of the time.

After finishing the game, I replayed the first few hours, trying to take the exact opposite stances I did the first time, and nothing in the immediate plot was affected at all. Whether you ask the Quarians you meet on your first real mission to cooperate or get lost, the mission plays out exactly the same way. I'm sure some choices have greater impact later on, but for the most part, minor conversations don't actually seem to matter much, especially in comparison to something as detailed and reactive as the much less known Alpha Protocol.

I get a sneaking suspicion this is the case for the series as a whole. Since there was no PS3 version of the first Mass Effect game, new copies of Mass Effect 2 include downloadable content that allows you to make all of the major decisions in the first game in the form of an interactive comic. That's a fantastic feature, but it's idiotic that it's locked behind downloadble content, and costs money for people who buy the game used. This is pretty much equivalent to selling used buyers a book that's missing its first chapter unless you pay another $15.00. It's sleazy, cheap, and offensive, but that's a topic for another rant. The comic itself does a good job summarizing the first game; I never felt lost playing #2. Choices in the comic such as choosing to save Kaiden or Ashley and whether Wrex lives or dies obviously matter, but some choices don't seem to matter at all. You choose which of two men to assign to the first human seat on the Not-Federation Council, Anderson or Udina. I went with Anderson. Because of this, Anderson gets one minor scene in ME2, and then when you get to the third game, the Human representative is Udina, no matter which of them you picked previously. I'm sure there are more examples of this popping up throughout the series.

Aside from The Arrival, a chapter that bridges the gap between the second and third games, all mission DLC from the Xbox version is included in the PS3 version by default, some on disc, some downloadable for free if you buy new. Two new characters are added, one decent and one completely unlikable. A few new missions are added, including a very good one (Lair of the Shadow Broker) and a whole bunch of terrible vehicle missions. I don't know why anyone would look at this game and think, "You know what we need? Platforming sections! And instead of a dude jumping around, it should be a car." It controls about as well as it sounds. These awful missions are by far the worst part of the game, and I'd be pretty mad if I'd actually paid for them. There's also a car chase scene full of bad physics and bad one liners that should have been deleted from the game.

The big thing that makes Mass Effect work is its characters. The story is certainly not original, though it's told in an exciting way. The aliens you encounter and befriend are all quite interesting. Like Trek races, most have one distinguishing feature at first (Warrior Race, Trader Race, Machine Race) but interactions with individuals of these species adds a decent amount of depth and understanding to them. The Asari come dangerously close to being the Cheap Fan Service Race at times (Star Trek's Orions, Star Wars' Twi'leks, etc.), but the rest of the aliens in this series seem well designed. 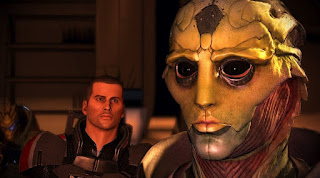 Some characters are certainly better than others. Mordin, Grunt, Garrus, and Thane are all great. Miranda and Jacob are interesting, though less so. Jack (with a bad art design and worse personality) and Zaeed are pretty hard to tolerate and I don't feel bad about failing the mission to inspire Zaeed's loyalty. Legion is a very interesting character, but introduced much too late in the game. Samara is fine as a character but absolutely embarrassing from a costume design perspective. She's at the top of her people's intelligence/law enforcement organization, but she wears an outfit that even the exotic dancers you see in the game's clubs wouldn't want to be seen in. Her design feels like the worst kind of fan service, and it makes it hard to take the character seriously. Her creepy loyalty mission doesn't help matters at all (you have to capture the attention of her daughter, who is a sexy vampire that seeks out artists (See Star Trek: DS9's The Muse), seduce her, and help her mom kill her. What?). Miranda's uniform is pretty bad too (and there are way too many moments where the camera pans to her butt) but it at the very least looks like clothing you might theoretically wear around, maybe. Samara would make Gene Roddenberry proud, at least.

Part of what sells the characters is that the voice work in this game is generally excellent. There are a few celebrity voices (Martin Sheen plays the Illusive Man, Seth Green plays the ship's pilot, Joker) and a handful of Trek cameos (Michael Dorn, Armin Shimerman, and Dwight Schultz) that were fun to spot. Male Shepard's voice feels too casual and doesn't sound like the way a commander should speak, while Female Shepard sounds much more professional. In spite of being the default character, the one most players probably choose, Male Shepard's voice is one of the weaker actors in the game (though certainly not as bad as the Scottish Engineer, whose actor does the worst James Doohan impression ever). This isn't really a surprise; Female Shepard is performed by Jennifer Hale, who has appeared in well over 200 productions dating back to the late 80's. Male Shepard's actor has only been in a relative handful. Hale's take on the character has a greater range and does a better job portraying a commander, while the male voice sounds more like a soldier. There's a lot to be said about each of the game's characters, but that would be best suited to a separate article.

(As a minor aside: I don't like that the game's fanbase and developers refer to the Male Shepard as simply Shepard and the Female Shepard as "Femshep." It feels diminutive; either use an adjective for both, or neither.)

I am pleased with the options you have for building your character, but I have to say that the interface is terrible. There are plenty of hair styles to choose from, for instance, but instead of showing the player a list, either text or visual, you simply move a slider. There's no real logic to it and there's no way or reason for me to remember which slider value equals my character having a mohawk. This over-complicates the selection process, which I'm sure is a small reason most people seem to just use the default look. I'm sure another reason is just that players feel comfortable playing as a White Space Marine With Short Dark Hair, this console generation's most boring archetype.

Overall, I think Mass Effect 2 is a great experience, even if the gameplay's nothing transcendent and there are a few uncomfortable moments. The game hinges on the strength of its characters and its world, and for the most part these are quite well designed. The ending leaves me excited for what's to come in Mass Effect 3, which I had only played for a couple of hours before my PS3 blew up and died. Sure, the game ends on a TO BE CONTINUED note, but this episode of the story feels complete enough while still leaving me wanting more.
Posted by surlaw at 12:13 PM