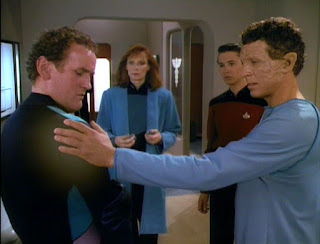 "The Enterprise rescues a critically injured amnesiac who is undergoing a mysterious transformation."

An injured alien is found, Dr. Crusher takes a liking to him, weird things begin to happen on board. The episode opens with Geordi and Worf broing around talking about ladies, at which point one approaches the two of them and Geordi goons out hard and she leaves. Worf scowls at his dishonor.

I've been a bit behind on my Trek reviews because I really don't know what to say about this one. Nothing about it really stands out as good or bad in any way, and in fact, it wasn't until about midway into the episode that I even remembered I'd seen it before. It's a mediocre episode in the blandest sense, and I'd rather watch something that's aggressively bad. It's kind of amazing that something this dull would be aired the week before Best of Both Worlds.

The best moment in this episode is finding out that O'Brien has injured his shoulder in holo-kayaking, which would later become a running joke in DS9. A good, humanizing moment for the series' best Everyman character.

O'Brien's shoulder is healed when he's touched by the alien. Contact with alien guy also turns Geordi into a ladies man, whose new found confidence allows him to make up for his earlier bungling. This doesn't come up again in future episodes and he's back to being nervous goon later.

Conflict arises when some other guy from the alien's planet demands he be returned because he's a criminal. His crime is that he's, of course, "different." Turns out that instead of it being an issue of race or religion or orientation it's because he's turning into a super hero. Bad Guy gets lectured at, Alien evolves into Dr. Manhattan, everyone learns a lesson, I guess. The form of evolution present in this episode isn't the Survival of the Fittest kind, but rather the Pokemon kind, where you get surrounded by a bright light and then you become something entirely different. 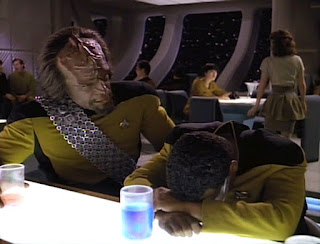