The Add Salom to Everything Contest

It's the Add Salom to Everything Contest! Lately, Salom Lancoven, the seal monster hero from Walthros and Who Killed Dinosaur Giant? has found himself in a bit of a jam. Specifically, he's stuck in a pipe. A PIPE!

His good friend Bob Surlaw has been posting obnoxious pictures of him on Facebook to make him feel bad about his predicament. That's where you come in! Take the picture of Salom below and add it to something else. It can be original artwork, a photograph, you can print him out and tape him to a building or something, whatever.

RULES:
1- The submission must be submitted privately, either by e-mail or private message. Don't say which picture is yours until voting is over!
2- The submission MUST include the picture of Salom stuck in the pipe. You can add stuff to him, recolor him, etc., but it still must be recognizably That Salom Picture. If you want to vectorize it and make it huge or something, that's cool. Just don't redraw the entire thing (unless the original is featured as well).
3- Don't be obscene. The internet's gross enough already.
4- Go easy on internet memes. Text doesn't always make a funny picture funnier. Don't include My Little Pony jokes, those are boring and overdone. I know you can do better than that.
5- Submit your picture by Saturday, May 5th, 2012.
6- I have the right to refuse to showcase any submission for any reason.
7- Submit as many pictures as you'd like. If way too many are received, I'll choose the best 20 or so for people to vote on.

Voting will be held after HamsterSpeak #61 is released. Submissions will be displayed anonymously, so that we don't all just vote for our buddy's picture. 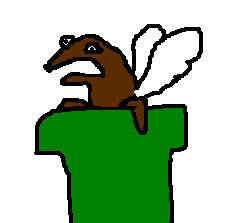