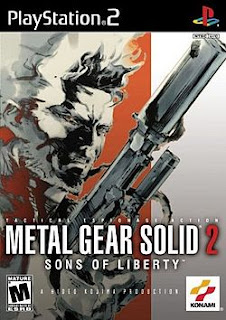 Today is Patriots' Day, a holiday no one celebrates outside of Massachusetts and Maine, so what better game to review today than Metal Gear Solid 2? Metal Gear Solid 2, originally released in 2001, was one of the most anticipated sequels of its generation, and in the end, it left a lot of players angry, in spite of being a huge step up from the previous game when it came to controls, combat, encounter design, and audio/visual qualities. Whether the story is a step up is a more debatable topic, but suffice it to say, I'm a big fan of MGS2, even if I know the pacing's undoubtedly messy and some of the plot threads are unfortunate.

Metal Gear Solid 2's far from perfect. Its camera is restrictive, though less so than the original Metal Gear Solid's, and you'll spend too much time staring at your radar instead of watching your environment. The controls can seem overwhelming if you're not used to them, and can seem limited if you've played later games in the series. The cutscenes do tend to be too long, even if I enjoy them. Otacon's B-plot is horrible. More on that later. 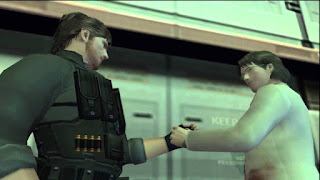 Like its predecessors, Metal Gear Solid 2 mixes action and stealth, while rewarding players for getting through areas unseen. The stealth aspect is very well handled, though you have fewer options in Metal Gear Solid 2's second act than its first. Shooting works well enough when you switch into first person view, but is awkward in third person. Hand to hand combat is also extremely sloppy, and has no finesse at all, but at least it's smoother than the previous game's. There are a few boss fights peppered in between the sneaking, some good, some bad. The ones that are the least entertaining (Fat Man, Vamp) tend to be limited because of the game's camera. It's not fun to chase and shoot at enemies off screen, but often that ends up being an effective method. Unless you're up against a wall, the camera is locked in an overhead view, so enemies that would be easily visible in reality are completely out of view here. This wasn't a problem in the NES/MSX Metal Gear games that originated this series, but it's always bothered me in Metal Gear Solids 1 and 2, 1 more so than 2. 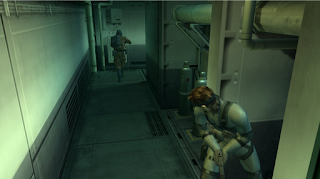 The maps in this game are well designed, and most enemy encounters should be approached more as puzzles than out and out fights. There is a wide enough variety of selectable difficulty levels to suit any player, so you're free to just goof off or to run yourself into the ground with frustration if you choose to.

What really divided players here is the story. From Metal Gear Solid forward, these games have had long, melodramatic cutscenes that total several hours in length by the time you're done playing. There are also an extremely large number of optional conversations you can hold over your radio with your supporting staff that also total hours of time. When all's said and done, you're probably going to spend as much time watching/listening to cutscenes as you are playing the game. If that bothers you, you're not going to have fun here. 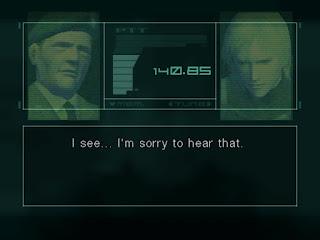 The story of Metal Gear Solid 2 is divided into two acts. In the first, you are Solid Snake, the only playable hero of the series up to this point. In the previous games, Snake faces off against Metal Gears, giant bipedal machines that look vaguely dinosaurish and tend to be equipped with nuclear weapons. He is a genetically engineered soldier with a heart of gold who went rogue in order to save the world from nuclear oblivion. Along for the ride to support him is Otacon, a man named after anime conventions. He's generally as terrible as that sounds. 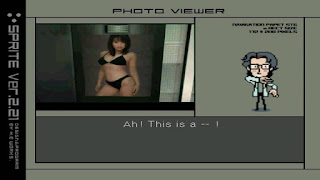 The first act is fairly short, and serves to introduce the major players; Snake, Otacon, and Ocelot, a suave gunslinger who lost his arm in the previous game and has since replaced it with the arm of Solid Snake's dead brother, Liquid. He gains the ability to channel Liquid's spirit through this arm... or does he? This is a game that revels in the ridiculous. It's largely shot in a straightforward manner, but there are enough winks at the audience that it should be completely apparent that this story is often meant to be silly. A lot of gamers weren't a fan of that, and wanted more realism in this game, in spite of being fans of the previous game in the series, in which a flying psychic in a gas mask makes jokes about what you've got saved on your memory card.

The second act introduces Raiden, a newcomer who is embarking on his first real infiltration mission. He is tasked with entering an oil cleanup facility off the coast of New York to rescue a group of hostages, including the president of the United States. Along the way, he fights a vampire, an overweight mad bomber on rollerblades, and an army of robosauruses. The game is tremendously self aware; during Snake's segment, little time is spent telling you how to play, since Snake's done this kind of thing before. Once you take over as Raiden, you'll get more than a few "Press the action button to open the door!" type messages, since he's the new guy here. It's not very helpful to new players, but it's funny. 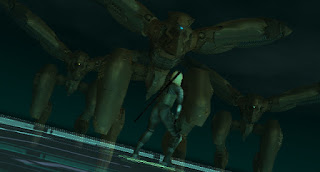 I don't want to go into too many specifics about where the story goes in the end, but as Raiden continues his mission, the world he's in becomes increasingly surreal and the technology he's relied on to get this far becomes a danger. It ends with a series of long discussions on artificial intelligence, societal control, and the problems with the internet clogging up everyone's brain with junk. At first, Raiden is tasked with stopping Solidus Snake, the surprise third brother of Solid and Liquid. Solidus was formerly the president of the United States and wears a Doctor Octopus costume. In spite of that silliness, he's an extremely interesting villain. He's unequivocally a bad person (He got his start training child soldiers), but his ultimate goal may be for the best.

Raiden discovers the true enemy is a secretive group known as The Patriots, a group that writer/director Hideo Kojima changes entirely over the next two games to suit the stories he wants to tell. He's very clearly making the overarching story up as he goes, so if there's a loose end that really interests you in one game, you're probably not going to like where it ends up in the next. Solidus seeks to free humanity from The Patriots control and is completely justified in doing so, even if his methods are far from moral. 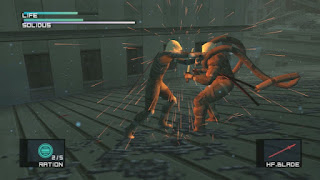 The character of Raiden was also a sore spot for a lot of gamers when Metal Gear Solid 2 was released. There was no media of him leading up to the release of the game, leading players to believe they'd be spending the whole time playing as Solid Snake. The story is very much a bait and switch in this regard, but I think it works. Late in the game, The Patriots explicitly state that part of their ambition is to control and use information and misdirection to manipulate human behavior. Kojima did pretty much the same thing in all pre-release media.

Snake remains a major part of the story, but his heroics are seen from an outside perspective rather than his own point of view. While Snake is a gruff Macho Man straight out of the 80's, Raiden is the kind of pretty, long haired hero that had become more common in Japanese media by the start of the 21st century. Snake is a relic of a bygone era, both as a person and as an image. This becomes an increasingly important message in both this game and in Metal Gear Solid 4, and it wouldn't be nearly as effective if Raiden wasn't so starkly different from Snake.

Another part of Raiden's story that bothered fans is his girlfriend, Rose, who serves as technical support via radio (and saves your data). Yes, she goes on far too long about topics that sometimes have little to nothing to do with the main story, but she develops Raiden in doing so. She is not a likable character, but by the end, I don't think she's meant to be. Her stories of what Raiden is like outside of the mission add to his character in a way that teaches us that he's badly, permanently damaged by war just as heavily as the enemies he faces off against. Raiden isn't an antihero by any means; he does what's right and fights to protect people, but he has a dark, screwed up past that the game delivers in a very well done way. He comes off as an everyman at first, but he's anything but. 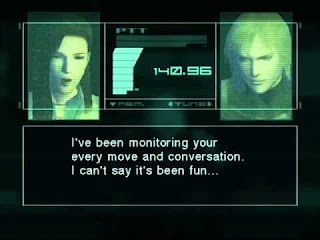 Less well done is the dark, screwed up past of resident nerd Otacon. Snake's story is about identity and what it means to be a legend; Raiden's is about the horrors of war and control. Otacon's story is about sleeping with his stepmother and the crush his stepsister has on him and how his father killed himself when he found out. I don't even care about spoiling this part, because it's terribly written, laughably acted, and brings the game's pace to a grinding halt. If there's one part I'd excise from Metal Gear Solid 2, it's this, right here. Otacon is a slightly annoying character in Metal Gear Solids 1 and 4, but in the second game, he's a disaster. Absolutely nothing of value would be lost if you cut his plot entirely. It's possible that the entirety of Otacon's character is intended to be parody, but the writing falls so flat here that even if it is, it's still not good. 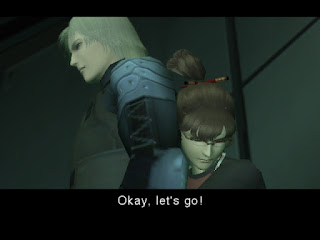 In spite of the dated control scheme, uncomfortable camera, and everything I said in the previous paragraph, Metal Gear Solid 2 is an extremely good game that's still worth picking up over a decade later, especially since it was re-released in a collection on the PS3/Xbox 360 that also includes Metal Gear, Metal Gear 2: Solid Snake, Metal Gear Solid 3 and Metal Gear Peace Walker. The stealth gameplay is still fun, the silly parts of the story are still funny, and the surreal parts can be downright creepy (in the good way, not in the Otacon's Mom way). The HD Collection port looks quite nice and is among the best I've seen. Konami did a great job repackaging these games, and since you can get all of them for around $30 total it's hard to recommend tracking down an original PS2 copy when you've got this option instead.
Posted by surlaw at 6:37 PM