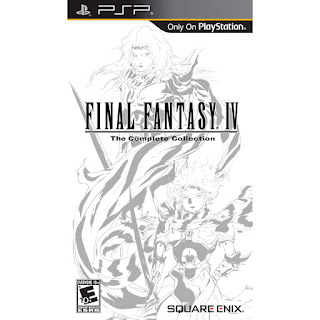 Final Fantasy IV is one of the most often re-released/updated games in the series. Originally released on the SNES in 1991, FFIV has been re-released on the original Playstation, Game Boy Advance, Wonderswan Color, as a downloadable title on the Wii, and probably some more minor releases I'm missing. It was also remade for both the DS and PSP, although the two remakes went in very different directions, with the DS version implementing full polygonal graphics, new dialogue, and new gameplay systems. The PSP remake, released as part of the Final Fantasy IV Complete Collection, maintains the original version's gameplay systems in their entirety while introducing new recordings of the classic soundtrack and new, higher resolution pixel art. For this review, I'll be talking about the PSP version, though outside of specific references to the new graphics, nearly everything I say can apply to the non-DS versions as well.

Final Fantasy is a polarizing series; it has wide, mainstream appeal, but True Nerds will fight to the death over which games are terrible and which ones are amazing. I'm not interested in such arguments, nor am I interested in ranking the series as a whole, because these are games that vary wildly in tone, art style, and music from game to game and sometimes take radical departures from standard turn-based RPG gameplay as well. It's more interesting to delve into what works and doesn't work in each game individually than to engage in fan arguments about rankings.

That said, Final Fantasy IV is probably my favorite game in the series, not counting spin-offs. It's common to say that everyone's first RPG is their favorite, but by the time I first played FFIV, I had already spent a good deal of time with the original Final Fantasy, Dragon Warrior, and a couple of Ultima games, and while I enjoyed them all to varying degrees, FFIV was the first RPG to really draw me in. Its pacing, its monsters, its characters, and its music were all a huge factor in this, as was its story that at the time seemed really amazing. In retrospect, the actual plot is pretty stupid, but it's told in a way that's entertaining enough to make it exciting.

As a footnote in the game's history, the original North American release was renamed Final Fantasy II, as Square and Nintendo decided to skip on releasing the actual second and third games overseas. The name is corrected to Final Fantasy IV in almost all subsequent releases; only the Wii version still, stupidly, calls it FFII. This release was also a toned down, Easy Type version of the game that removed the need to use a variety of items to heal status afflictions and removed some characters' special abilities. Toning down the game's battles and item management doesn't really lessen the fun of the game, but removing abilities definitely does. This release was also lightly censored, but not in a way that really matters to the story. Later releases restore the bits that were removed for our first release. 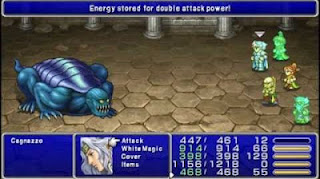 The PSP remake, in addition to having nice new graphics and remixed music (you can also switch to the original soundtrack at any time), cleans up the game's translation while keeping iconic lines from the original English release. It flows better, but still feels like the same old story. Purists aren't going to be upset about this, I would hope.

The game's battles are what now seems like standard JRPG fare, but when this game was new, the idea of an active battle system, where each character had a meter that had to fill up before they could act, was an innovation, as most RPGS had you choose all of your party's abilities from menus at once and then let them act them out in order of speed. The active-time battle system tried to make things more exciting, but honestly, it just meant more downtime while you wait for meters to fill as literally nothing happens. The PSP remake adds a fast forward button in battle that speeds everything up by a significant amount and causes your characters to auto attack when their turn hits, resulting in much more fast-paced battles, especially against easier enemies that don't require any strategy. If you auto-battle against bosses, you'll die quickly.

The story involves a world where a series of crystals hold the planet's elements in balance. This is considered a Final Fantasy mainstay, but there are plenty of games in the series where this isn't a plot point. Baron, the strongest nation in the world, wants to gather all of the crystals and take over the world. You begin the game controlling Cecil and Kain, two soldiers of Baron who quickly learn that their king is a Bad Dude and go off on their own. Throughout his quest, Cecil meets many new companions, fights huge enemies, goes to the moon, and gets betrayed by Kain and then forgives him and then gets betrayed again every 3 or 4 hours.

The characters are largely simple archetypes who don't have a ton of depth, but their simplicity works. This type of character is hard to use well in a more serious story, but Final Fantasy IV feels almost like a Saturday morning adventure cartoon in its depth, and the archetypes work perfectly in that setting. Final Fantasy VI's richer, more conflicted characters wouldn't work in the world of FFIV and vice versa. This game definitely tries to feel more like a cartoon, while the later Final Fantasies try to feel more like movies; a new, exciting location is visited every half hour, and the plot proceeds as a relentlessly fast pace as new bad guys and heroes are introduced. It never slows down, even if you take time out to do some sidequests. The game only lasts 15-20 hours depending on the amount of sidequests you care to do, and I think its length is perfect. The story hits every point it needs to without overstaying its welcome.

I can replay Final Fantasy IV a lot easier than I can replay other games in the series, and the PSP version makes it even more fun (I absolutely love the fast forward feature). I like that every character has a distinct, specific use in battle, and the way the game decides who is in the party at any given time keeps things fresh. At the end of some versions, you can build your own party for the final dungeon, but this feature is not present in the SNES release. There are a couple dungeons I dislike (Sealed Cave, Underground Waterway) but the game is so fast that I don't have to deal with them for too long.

I prefer the characters of Final Fantasy VI over IV, but when it comes down to which game is more fun to play, I have to be honest and go with IV. I love FFVI, and it's definitely a classic, but it's also so easy to break with your party's abilities that the battles are more of an annoyance than a challenge. There are also a handful of characters in VI that are so underpowered that there's no reason to ever touch them. The theme of love in both games is handled in a hokey way, but at least IV dwells on it less. IV definitely has a dumber, shallower plot, but that's not always a bad thing. It may be predictable and cliche at times, but the way it's designed keeps it going strong.

The PSP remake is the definitive version of Final Fantasy IV. It also includes the utterly ignorable FFIV: Interlude and the plodding rehash FFIV: The After Years, which I reviewed previously. I know a lot of people reading this likely don't have PSPs, but I wouldn't worry too much. If past is prologue, this version will end up being ported to a half a dozen systems in the future.
Posted by surlaw at 2:56 PM