Skullgirls
I want to preface this review by saying that I really appreciate the idea of an indie group bringing a new fighting game to consoles and selling it cheap. I love Street Fighter, but it's always good to see someone new take a shot at the genre. That said, I don't think Skullgirls is for me.

The game is a tag team fighter like Marvel vs. Capcom, but it seems to be paced in a way that's much more coherent and easy to follow. I never felt lost, even when doing terribly, which is a step up from MvC3 where I'd sometimes get lost even when doing well. The sprites are huge, extremely detailed, and fluidly animated. This is the first 2D fighter I've seen truly take advantage of HD resolutions in such an impressive way.

That said, while the art is lovingly crafted and very technically impressive, I can't stand it. The game features an all female cast, and as far as I can see, outside of Peacock, whose design I actually do like, it might be sleazier than any other fighter I've played, and given how trashy Soul Calibur and even Street Fighter can get, that's really, really saying something. Your characters' breasts, thighs, and butt constantly jiggle and tease in a way that absolutely makes me uncomfortable playing the game.

I've certainly got no beef with cheesecake characters (I love Bayonetta and I'm a big Soul Calibur fan, afterall), but I feel like the art here crosses a line between fan servicey and uncomfortable in a way that's hard to articulate. It feels like fetish art, but not the kind you see from someone who truly loves the female form. It feels cheap, tacky, and dirty. I'm fine with having sexy characters in a game, but when 7/8 of the characters look like these ones do I have to question the motive here, especially when the characters have official bios that state useful facts like "Measurements: 36E-25-40." Most of the characters' waists look barely wider than their necks.

That probably won't bother a lot of gamers. It bothers me. I don't think I could play a game where this is all that's ever on screen. This disappoints me because, again, the art is so well animated that I want to like it, but I just can't. I can appreciate art that celebrates female sexuality. I can't appreciate this: 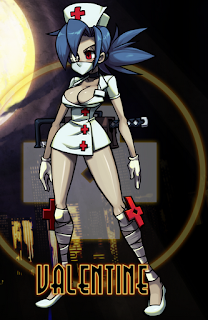 On to gameplay related details: Its basics play very much like a Street Fighter or Marvel game, so if you've played one of those, you'll feel right at home. Its tutorial mode seems designed to cater to first time players rather than veterans, which is a nice change. I entered trained mode and was shocked that there seemed to be no way to display an in-game move list. Other technical things: The game has a small number of characters (8 total, 2 playable in the demo), but the character select boxes are tiny. They could be twice the size, easier to see, and easier to use. There's no way to test the game's online play in the demo, so I can't say anything about that. Hopefully it works fine. I can't say much more about the mechanics without spending a lot of time with the game playing it with other people, and I don't think I want to.
Posted by surlaw at 7:15 PM