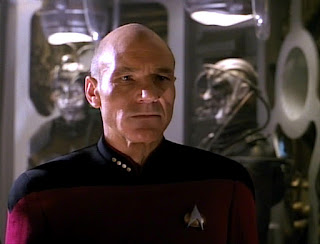 "The Borg begin an invasion of Federation space much sooner than was expected. With the Enterprise unable to affect them, the Borg capture Captain Picard and turn him into one of their own."

One of the greatest Things Just Got Real episodes of any TV show, Best of Both Worlds brings back the Borg in their first appearance since they were introduced in season 2's Q Who?, explains the disappearance of the colonies in season 1's The Neutral Zone, and ends on the best season ending cliffhanger of the series.

There's a slow build to the Borg encounter in this episode. The atmosphere's tense, everyone's on edge, and there's a feeling of dread from start to finish. This is the first time we really get to see what the Borg can do, since the encounter in Q Who? was interrupted by Q before it could end (and it would have ended badly for the Enterprise). This is the first reference to the Borg's assimilation of other life forms, as opposed to just being a race of machine-humanoid hybrids.

The capture of Captain Picard and his transformation into Locutus of Borg is appropriately horrific, and is the clearest memory I have of any Next Gen episode in its original broadcast. When you're six, these scenes are pretty scary!

The portrayal of the Borg and their technology is, sadly, at its high point here. They're not nearly as threatening in any future portrayals, and while lots of people like to cite Voyager for ruining the Borg, things honestly go downhill with Borg stories as easy as TNG's season 6/7 two-parter Descent, and the awful Borg Queen character in First Contact just makes matters worse.

This episode is fantastic, but its b-plot isn't perfect. Shelby, a specialist in Borg tactics, comes on board the Enterprise gunning for Riker's job, as Starfleet tries to get him to accept command of his own ship. Obviously he wasn't going to leave the show, being a popular, entertaining character, so if you're going to do a plot like this, you really have to make the audience believe in his conflicted feelings. I never once felt that Riker intended to leave the Enterprise, and I never felt that Shelby was fully realized as a potential replacement. The camera work, music, and writing make her out to be a rival who we're meant to side against with Riker, but to be completely honest, outside of one session of sass, nothing she does justifies the way Riker pouts around her. He comes off as a big, beardy baby. Still, he gets the best final line of a Star Trek cliffhanger. 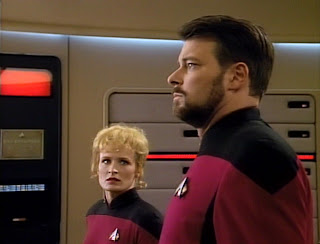