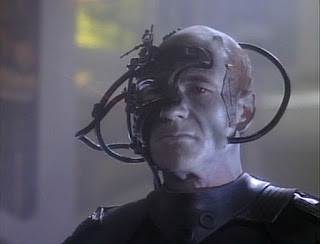 "With Captain Picard assimilated by the Borg, the enemy is able to totally vanquish a Starfleet/Klingon armada at Wolf 359, leaving Riker in command of the Enterprise and forced to go one on one with his former captain."

A lot of Trek two-parters drop the ball in the second act, but thankfully The Best of Both Worlds avoids this. The continuation is just as strong as the first part, and gives us an even deeper look at just how massively outclassed the Federation is when up against the Borg.

Riker, as acting captain, seems nervous and unprepared. In a way, that's perfect, since it parallels exactly how the rest of the fleet should be feeling as the Borg ship approaches Earth. We don't actually see The Battle of Wolf 359 until the opening episode of DS9, but we see its aftermath; 40+ Federation and Klingon ships are annihilated without effort by a single Borg cube. That stark, shocking concept gets ruined a bit by future encounters with the Borg, but as it stands here and now, the visual of the massacred starships is unforgettable.

The solution to stopping the Borg threat for the time being is to treat them like a computer, rather than treating them like an alien. The battle isn't won by phasers and photon torpedoes, but by essentially exploiting a bug in their software. This ends up making the episode feel less like a space opera triumph and more like a Star Trek take on War of the Worlds, and I think that's perfect.

I would have liked to have seen Shelby stick around for a few more episodes. I think she's a good character, and shows a level of eagerness and ambition that you don't normally see on the otherwise kind of sleepy (as far as protocol and promotion go) Starfleet ships. It would have been nice if Voyager had had its Strong Female Captain written as well as Shelby instead of the general dullness we got from Janeway. That's not a matter of acting or an insult towards Kate Mulgrew; I think she could have played a more ambitious, hardened role extremely well. That's for another post, though.

Best of Both Worlds, along with next episode in the season, sets a darker, more introspective tone for the series that I wish lasted longer than three episodes. I love Next Gen, but I see missed potential here. It's a little bit hard going back to Anomaly of the Week episodes of Trek after this arc. I'll say a little more on this in my review of Family. 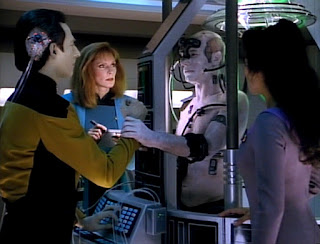