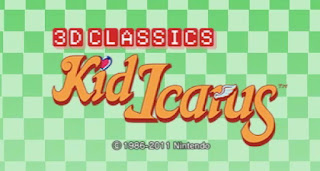 This review will cover what's new and changed in the 3DS version of Kid Icarus. This game is not a straight emulation of the NES original; it includes some new graphics, sounds, and gameplay features that make it a unique experience. For my thoughts on the original game, please read this review. Most of the core concepts apply to both versions, but I think keeping these reviews separate will be helpful to old fans wondering if the new edition is worth their time.

Unlike the 3DS Virtual Console titles, which are straight ports, the 3D Classics lineup adds new features to make old games more accessible to modern audiences. In Kid Icarus's case, that means a few visual and design tweaks that I'm definitely in favor. Unfortunately, not all of the changes are good, but I'll focus on the good first.

Gone is the long, complicated password system of the NES version. Now, you have three save files, and the game auto-saves after completing each stage. This is a major relief, and it fixes my single biggest complaint about the original game. Sometimes, convenience trumps nostalgia, and when it comes to passwords systems, I'll take convenience any day.

The graphics have been updated so that the game isn't just set in front of an empty black backdrop. I didn't have a problem with the blackness of the original game, but it definitely looks nicer now, and the 3D effects on the scrolling backgrounds work well. I wish there were an option to switch between the two background styles, but the new ones do look good, while still maintaining a retro feel. 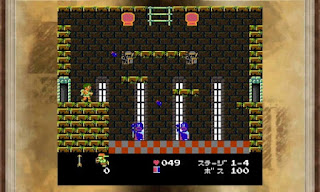 The game is a little less punishing now, since you now have the ability to shoot enemies from beneath the thinnest platforms. This doesn't break the game, since you only have perfect shots in a few circumstances, but it does make it easier to avoid the Reapers now, and I know that will please some new players. All of the slowdown of the NES version is also eliminated, making platforming feel more consistent.

Visually, the new version looks nice, the save system is great, and the slightly rebalanced gameplay works well. I'm honestly surprised, after years of feature-free Virtual Console games on the Wii, to see Nintendo make this kind of effort. Sadly, that brings us to the game's two flaws, one minor, one major.

Some sounds have been altered, for no reason I can tell. The noise you make when damaged is changed, along with a few other little sounds, although they still definitely sound like NES sound effects. Most of them are so close to the originals that I question why the change was even made. The one that matters though is a big one; the sound that plays when you're spotted by a Reaper. The old crazy song that plays when they see you still plays, but it's preceded by a horrible, shrill, awful to listen to screech, rather than the slight warble they used to make. It sounds terrible, and it should have never been altered. This doesn't ultimately affect the game, but it is unfortunate.

The one major change is one I'm quite unhappy about. Kid Icarus was a fun game to beat once, and even more fun to beat twice, since you retained all of your powers upon completing it. This New Game+ mode has been stripped from the game entirely, and I have no idea why. You can still continue from the same save file after completing the game, but you're back to square one on all of your stats. This robs you of the joys of barreling through the game super powered, and prevents you from having fun maxing out your item stock. New Game+ is a big reward for completing the original game; the whole game trains you in its intricacies, and once you start over, you're ready to rock those snake monsters like a real hero without the fear of dying from bumbling into a spiky plant. Taking this mode out significantly cuts down the game's replay value, and was a very poor decision. Nintendo does patch 3DS download titles; I can only hope this one gets a patch to restore one of the most fun parts of the game.


I definitely think the new version is worth playing, in spite of these issues. It's more accessible to new players, and offers nice new visuals for old fans to check out. It's a shame the 3DS d-pad is so small and so low on the system, but I was still able to complete the game without any real control issues.

Edit: I had previously stated that it was an oversight to not include a manual, but it turns out there is one, just not accessible within the game itself. To access it, you have to press X while highlighting the game's icon on the system's main menu. It would be more logical to include it in the game itself, under the Credits and Settings sections, but it is there.
Posted by surlaw at 11:30 PM