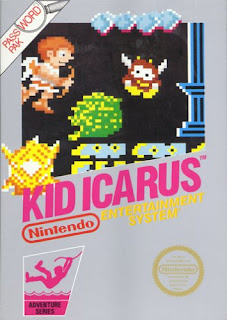 This review covers the content of the original NES game. For my thoughts on the 3D Classics edition, please click here.

Nintendo's Kid Icarus was released on the NES in 1986 after the completion of Metroid, a title which shared much of the same development staff. Aside from staff, the two games share a lot of other similarities; both involved a great deal of vertical platforming as opposed to the horizontal norm, both feature a hero who can shoot enemies but only (at first) at a very short range, both went sequel-free until receiving less well known Game Boy sequels, and both have an obnoxiously long password system. They also both feature Metroids themselves as enemies, though they're far less scary in Kid Icarus. While both titles earned a cult following, Metroid emerged as the more popular series. I kind of wish it had gone the other way.

Metroid became something great with its SNES sequel, after which the series laid dormant until Metroid Prime relaunched the series on the Gamecube. Kid Icarus wasn't so lucky; its Game Boy sequel went almost unnoticed, and it wouldn't receive another installment until Kid Icarus Uprising was released on the 3DS in 2012. However, unlike the seriously flawed, poorly paced original Metroid, I feel that the original Kid Icarus is an extremely strong game that addresses a lot of the problems found in its spiritual predecessor.

The game is divided into three main worlds, each with four stages. The first and third worlds are entirely focused on vertical platforming. You ascend upwards towards a goal, shooting arrows at a stream of winged snakes, leaping frogs, and Grim Reapers. Along the way, you'll enter challenge rooms, where you must survive an onslaught of flying plates flung by Zeus, who will reward you with new powers if you survive. You can also buy items from grumpy shop keepers using hearts that you earn by defeating monsters. The game has a strange world, and that's not even getting into the Eggplant Wizards.

The second world is a much simpler horizontal platformer, which removes the single greatest danger in the game; the fact that as you progress upward, you can't go back down. If you fall off a platform, you're not tumbling back to an earlier one. In spite of your wings, you're going to fall down and die. The first and second worlds probably should have been switched, but as it is now, world 2 is a nice break from how relentless the first and third can be.

The second biggest danger is that your hero, Pit, starts with very little health and weak weaponry. You have a running score that's tallied at the end of each stage, but it really functions more like experience points than a score; as you hit certain thresholds, the game rewards Pit with more health. A single health upgrade makes the game notably easier. Because of this, the game is much more difficult when you begin than when you end, regardless of the player's skill level. The amount of enemies you defeat and hearts you collect also causes Zeus to appear in a few bonus rooms where he grants you stronger arrows and a new color palette.

Its learning curve is steep, but the game's difficulty is not unfair at all. Enemies emerge in set patters and give you enough warning that you're not caught off guard by them, and they don't spawn infinitely. The only truly deadly enemies in normal stages are the Grim Reapers, who begin a mad dance when they see you, at which point an amazing song plays and their tiny underlings swarm you. The key to these guys is to get them while their backs are turned.

This game is notorious for its difficulty, but as long as you take your time and don't rush, ever, it's really not that bad. It's similar to Contra, for old games, or Dark Souls, for newer ones, in that the key to survival to to be aware of your surroundings and take it as slow as possible. Wait for enemies to come to you, and don't treat it like a Mario game. That might not be a whole lot of fun for some people, and that's understandable, but it's wrong to say that this game is unfairly difficult. It's a hard game, but it's not hard in an obnoxious way. You have unlimited lives, and unlike Metroid, when you die you return to the game with full health.

At the end of each world is a maze-like castle, which removes the dangers of dying from falling entirely and instead shifts focus to trying to find your way to the boss within. Items can be found and bought to make this task easier. It's a good change of pace, and the mazes may have some repetitive rooms, but they're nowhere near as obtuse or full of dead ends as Metroid's. The bosses are weirdly balanced, with the very first one being by far the hardest, and not just because of your lesser equipment. You can use hammers found in scrolling stages to free some buddies to help you fight the bosses, but given how easily they die, it's probably more merciful to leave them stoned. Also, beware of Eggplant Wizards! This castle-dwellers will smack you in the head with an eggplant, transforming your upper body into an eggplant, leaving you unable to attack until you find a medic to heal you. This remains the most bizarre status ailment in any video game.

The game ends with a horizontally scrolling shooter and eventually a battle with a giant Medusa. You can't say this game doesn't have variety in its stages! Once Pit collects the Sacred Treasures of each world, he gains the ability to fly, shoot super arrows, and carry a big, shiny shield. It feels very rewarding to tear through this final stage easily after how much guff the earlier stages can give you, and the final battle is just a matter of finding a safe spot on the screen, which isn't too hard to do. When it's all over, the goddess Palutena grants you a better reward than Princess Peach ever gives Mario; she makes your muscles grow and makes you taller. Pit is now a Macho.

After completing the game, you can start again from the beginning with all of your powers retained. This makes replaying world 1 a lot of fun, since you're now both more experienced and stronger. It's always fun to play a game where things that used to stress you out suddenly become nothing to you as you learn its ins and outs. Kid Icarus, along with Zelda 2, is one of the most rewarding NES games I've played, as far as making you become a better player as you proceed. It's a spectacular platformer, and deserved much more recognition than it received upon release. Thankfully, it seems to be getting a little more time in the spotlight now, with a rerelease of the original game on the Wii in 2007 and a 3D update of the original game along with an entirely new sequel on the 3DS in 2012. Here's hoping Pit doesn't fall asleep for another 20 years.
Posted by surlaw at 10:56 PM