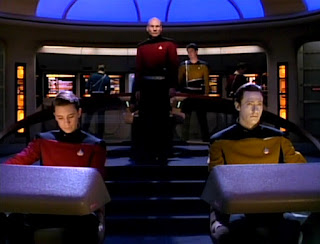 "A temporal rift opens, and the USS Enterprise-C emerges, changing the timeline into a reality where the Federation is in a bitter war with the Klingon Empire. The only one on USS Enterprise-D that realizes that something is not right is Guinan, and she must help return the Enterprise-C to its proper time in order to save themselves."

This is the closest Next Gen comes to having a Mirror Universe episode. In this alternate reality, the Federation is a darker, more militaristic organization, but not taken to the extreme that it becomes comical (Original Series) or just uncomfortable (Enterprise). I don't really have a lot of good will towards DS9's Mirror Universe episodes aside from the first couple, and would have preferred to see a tone more in line with what we get here than just campy fan service.

I like Guinan and I like the role she plays here. I know some fans have issues with her, but aside from the fact that they twice bring up her relationship to Q and then proceed to never go anywhere with it, I enjoy her scenes. She's a better counselor than Troi, and, as we'll later learn, is used to the weirdness caused by time travel.

This is an all around solid "What if?" episode with some good, tense action scenes. Next Gen action scenes tend to be kind of bloated, but what we've got here actually works really well. The captain of the Enterprise-C is well cast, and her fate definitely surprised me. This episode also gives the show the chance to bring back Denise Crosby as Tasha Yar and give her a more dignified send off than she got in season 1. Unfortunately, she's still a pretty bad actress. Everyone else in the cast has improved noticeably from season 1, but she wasn't around to gain that experience. She doesn't ruin the scenes she's in, but she's definitely the weakest link here. 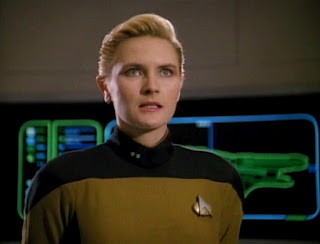 The absolute worst part of this episode is that its plot leads to the birth of the horrendously bad Romulan Commander Sela, the first in a long line of terrible Romulan villains. They should have stuck with Tomalak.
Posted by surlaw at 11:32 PM