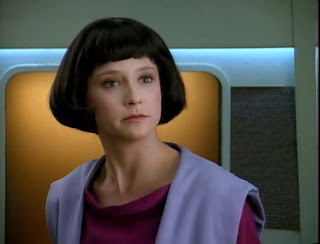 "Data attracts new scrutiny from Starfleet when he decides to build a child."

I really feel like this episode deserves a more memorable title.

This one goes into Data's rights again, continuing to address the questions raised in Measure of a Man.  The episode is split into two plots, the first involving his daughter, Lal, learning social interactions (at a much faster rate than Data) and the second involving Starfleet's attempt to claim her for research.

Both plots are good. It's not a full courtroom scene, but it's still a legal and ethical debate, and no show does those quite as well as Next Gen. Lal is well cast and, once she chooses a physical form to take on rather than the creepy golem she begins as, has perfect Robot Girl Hair. Her mannerisms and speech fit the whole "newly sentient android" thing really well, and I'm still impressed. She's better than a lot of Trek's one shot actors.

The crew's initial revulsion toward the idea of Data "procreating" is kind of silly given all the weird madness they've has seen up to this point. Is an android building another android really that horrible to conceive of? At least this one turned out better than Lore. Also, Worst Line of the Episode goes to Troi, when Lal is paging through possible sets of physical parameters. She takes a look into being a Klingon, and Marina Sirtis delivers, in the most halfhearted way, "A friend for Worf!" You guys are supposed to be his friends! Don't be mean to Worf.

This episode also contributes to the truth that all Starfleet admirals are awful people. 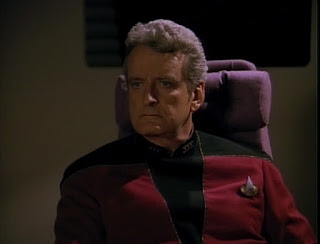