Fighting Mania is an arcade game based on Fist of the North Star, a manga/anime I have only passing knowledge of. It doesn't really matter whether you're familiar with the characters in the game or not. This isn't a story-driven adventure; It would work equally well if there wasn't even a character on the screen. It's a game where you punch the machine to do kung fu.

As your opponent dances around on the screen, one (or more) of the six padded panels attached to the cabinet will pop out at you. The objective of the game is to physically punch every panel as quickly as you can as they pop up. It doesn't matter how hard you punch them, just the timing. You can wear some uncomfortable plastic boxing gloves to play or be all macho and punch these things bare-knuckle.
Your punches build up a super move meter which, when used, makes all of the panels pop up at once, allowing you to punch everything you can as quickly as possible, as they'll continue to swing out at you until time runs out or you win the fight. It's a shallow game, but it's a lot of fun. 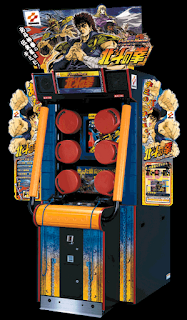 I ran into one of these machines on a trip to Montreal in 2002 at a 24 hour arcade that I'm not sure exists anymore. I think it was on St. Catherine; if anyone reading this happens to be in the area, let me know. I really enjoyed playing it, though obviously it's not something you're going to play for hours at a time. There's something special about a game like this, because even with all of the advances in home consoles today, there's no way to replicate the experience of playing this one at home. Sure, you can punch the air with your Kinect/Move/Wii Remote, but that's not as satisfying as actually slamming into padded foam targets. It's fun as both a game and as exercise, and it serves as a reminder of just what we're losing as the number of arcades in the world continue to dwindle.
Posted by surlaw at 3:42 PM