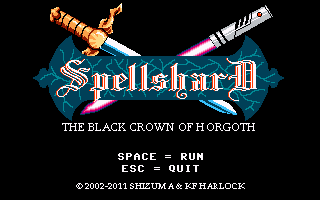 Download game here
Spellshard is the years long product of Shizuma and Harlock, two OHR engine users with more dedication to completing a major project than probably anyone else in the community. It is an unapologetically old school JRPG, with all that comes with that. It's tough, you have to grind early on, and it doesn't hold your hand. If this sounds good, you're going to have a great time with this game.

I've played about three hours so far. That this is just an initial impression and not a review after playing that long shows you how much there is to this game; most OHR games are rarely completed at all, and few that are get to be this long. This is a fully finished game, and it's very polished. The graphics are well drawn, the art well designed, and the text well written. This doesn't feel like an amateur game in the way most indie games tend to. These guys knew what they were doing, and their years of dedication really shows.

The premise of the game is that a great disaster occurs, Lords of Decay spring up from the muck, and technology falls apart. You choose four of eight classes of characters, give them names, and go off to beat up some ghouls. 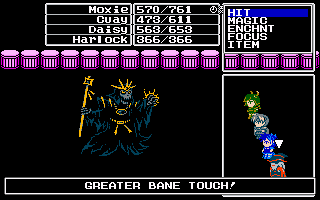 I felt that the very earliest part of the game, where you have no weapons, armor, or magic until you purchase them, dragged a bit due to the grinding required to get my dudes in good shape. You don't start with enough money to buy both magic and equipment for everyone, and I initially focused on magic. After this proved too difficult, I restarted and focused on equipment first and had a much easier time. Once you hit level 5 or so, the game's balance curve becomes much more enjoyable.

This game uses the style of magic seen in Final Fantasy 1 and the Suikoden series, where spells are on set tiers, each tier having its own number of uses, rather than the more common Magic Points system. This works well for the game's style and since all bosses seem to have save/rest points before them, I never felt stingy with using my spells in dungeons. I also enjoyed the world map, in which the area you're currently in fits on one screen with paths leading to each town/dungeon, new ones opening as you make progress. It's a simplified map system, but I think it works very well. It looks nice and it streamlines the experience.

I'm definitely looking forward to spending more time with this game. It's almost assuredly winning the OHR Game of the Year 2011 vote, but we'll see the results in April. Most OHR games don't hold my attention for a whole day, but this one's got enough meat on it to keep me interested. I just wish my dudes didn't start out so puny.
Posted by surlaw at 1:06 PM