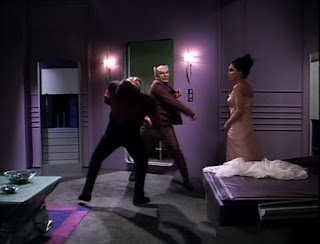 "When Riker is charged with the murder of a prominent scientist, each side uses the holodeck to show their side of the story."

This episode opens with Mean Professor Data critiquing the paintings of Captain Picard and a couple of crewmen. He makes Picard sad. After that, a space station blows up, Riker is put on trial, and everyone is sad. I don't think Picard ever quite gets over Data telling him his painting stinks.

A couple episodes ago, we had Rambo in Space. This time, we have Rashomon in Space. Riker may or may not have been naughty with the wife of a murdered scientist, everyone gets together to recreate the events from three different points of view. The first season Voyager episode Ex Post Facto rehashes this plot, with Tom Paris in place of Riker and memory probes in place of a holodeck. Unsurprisingly, it's done better in the Next Gen episode. The conclusion to both episodes it pretty stupid, though, and filled with science babble instead of legal babble. Measure of a Man is the better Star Trek Court Drama.

I want a whole episode of Data the Art Critic. 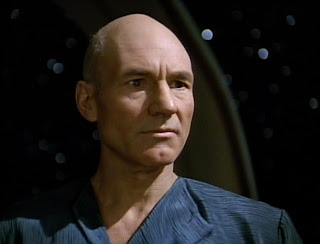