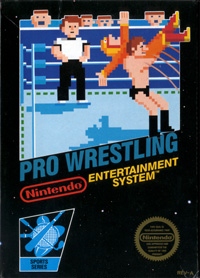 Pro Wrestling (1986) was my first fighting game. I've got good memories of playing this game with my brother and with friends after class back in elementary school. It's the second wrestling game released on the NES, the first being the horrible MUSCLE, which I also spent a lot of time with. Programmed by one guy, Masato Masuda, it is a slightly sloppy but nonetheless impressive wrestling game with a memorable cast of characters.

The player can fight using punches, throws, and special moves that are unique to each of the six playable characters. These specials are the only thing that sets them apart; each character is identical in speed, range, and stamina. You can dash, bounce off of the ropes, and jump on your opponent from the top rope. You can throw each other both onto and out of the ring. For a fighting game of this era, there's a surprising amount of variety in what you can do.

Matches end when a player is pinned for three seconds or stays out of the ring for 20. You can break a pin by mashing buttons, which drains your character's stamina a little bit every time. If you're good at mashing out, you can be very difficult to pin, leading to multiplayer games that go on for quite a while. Our games usually ended with throwing someone out of the ring and then keeping them from getting back in.

The six playable characters all have a lot of personality for 8-bit sprites. Fighter Hayabusa is a clean cut, by the rules player. Starman is a luchador with a flashy kick. Kin Corn Karn is a martial artist who chops instead of punches. Giant Panther is well-tanned and blond haired, so he's probably supposed to be Rick Flair. The Amazon is a mutant fish monster who plays dirty. King Slender is the pretty boy who thinks he's the best. The guy in the orange outfit on the game's box does not appear in the game. 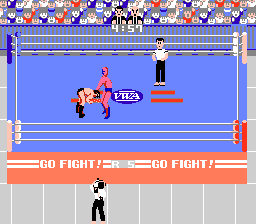 In single player mode, you select your wrestler and fight through the lineup a couple of times, first to earn your championship belt and later to defend it, before squaring off against the legendary wrestler The Great Puma. Puma is not playable and few players last long enough to encounter him, adding to his mythical stature. Once you've beaten him, you're the king, forever.

This game is probably best known for its victory screen, which shows your dude throwing his arms up in triumph (or to work up the crowd) while "A Winner is You" appears above his head. This phrase became an internet meme years ago, and has appeared in several other games as an in-joke. Like most memes, the people who parrot it seem to not know where it's from or why it's funny.

Pro Wrestling deserves better than to be remembered as a half-recognized meme. It's a quality game, it's an important step for the genre, and it's still pretty fun in spite of its simplicity. Years ago, the ESRB re-rated the game for release on the Wii's Virtual Console. The re-release never happened. This game is one of Nintendo's more forgotten titles, and that's a shame. Some day, Starman will shine again.
Posted by surlaw at 3:14 PM