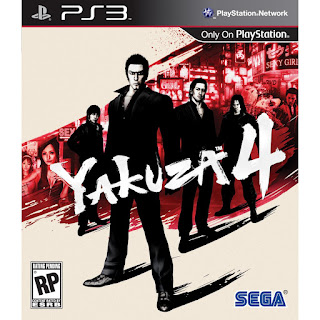 Released in North America in March 2011, Yakuza 4 was, like its predecessor, hanging in limbo for almost a year before Sega finally confirmed that an English translation was to be released. There wasn't quite as much worry over whether or not this one would get released here as there was with Yakuza 3, but given Sega's lukewarm dedication to the series, there was still some anxiety. Thankfully, the American release happened, and unlike the third game, almost the entire product was left intact. No missions were removed, no dialogue cut, and best of all, Shogi and Mahjong were included this time. The Japanese Trivia game was still cut, but that's fine. Yakuza 4 is both a better game than 3 and a better localization.

The core gameplay is unchanged from the previous game. You still punch, kick, and throw thugs that show up and hassle you in Kamurocho, a shady part of downtown Tokyo. Check my review of Yakuza 3 for more basic gameplay information. Yakuza 4 extends the city upward and downward, allowing you to run around and adventure on the city rooftops, walkways, and sewers. It's a little disappointing that everything takes place in one city after Yakuza 3 broke the action up into two, but Yakuza 4 changes things up by throwing three new playable characters into the mix in addition to series hero Kazuma Kiryu.

The story is broken into four main chapters, one focused on each playable character, and a finale in which everyone meets up and ties up all the loose ends. The first chapter focuses on Shun Akiyama, a loan shark with a heart of gold and a bizarre way of running a business (he doesn't charge interest, but he may ask you to give 14 of your 15 cats away before you can get his loan). His combat skills are quick and basic, and he serves as a good introduction to the way the game works. He's smooth, lazy, and slightly sleazy. Akiyama runs a Hostess Club, and you can play an optional minigame with him in which he attempts to teach girls how to best apply makeup and tell jokes. Lots of pink hearts float around during this game.

The second hero is Taiga Saeijima, a convict who escapes from a high security island prison days before he is scheduled to be executed. He was arrested for the murder of 18 fellow Yakuza 25 years prior, depicted in a rather brutal, extremely well shot cutscene. This scene, and the ones leading up to me, impressed me in a way game cinematography usually doesn't. He attacks using slow, strong punches and throws, and his fighting style is very different from what you become accustomed to in the previous game. He has a minigame in which he trains nerds in the ways of kung fu. It's basically a karate chopping virtual pet.

Third we have Masayoshi Tanimura, a police officer whose attacks are largely based around pressing a Counter Attack button at the right time. Unfortunately, on Normal difficulty level enemies aren't aggressive enough to take full advantage of his counters, which are quite a lot of fun to use. Tanimura is known for being a bribe taking extortionist, but it's ok! He uses the money he takes from sleazebags and uses it to help orphans and abused women. While playing his story, you can respond to optional police calls when you're nearby crime as it happens.

Tanimura is of mixed-race heritage, which plays a big part in his backstory and his motivations for helping the people he protects as he works to uncover the secrets behind his father's murder. He's the most fleshed out of the four characters, and could probably use his own game

The final character is Kiryu, and although he's the main character of the rest of the series, his role here feels kind of secondary. He exists to tie up the stories of the other characters, and his combat is largely unchanged from Yakuza 3. It's always a lot of fun to see Kiryu again, but honestly, in this game he's nowhere near as compelling as Akiyama, Saejima, and Tanimura. 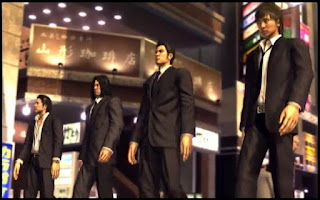 The individual stories are all quite well written, but the big, overhanging conspiracy behind everything is kind of stupid. There's a major, major cop-out towards the end that comes pretty close to ruining some major story elements, but I can overlook it. Just barely. The optional side stories are still funny, the minigames are more fun than before since the two Japanese board games are intact, and the pacing is much improved over Yakuza 3. The game starts out much faster, and doesn't have an info dump to explain the story at the end. The villains still monologue a bit too long, but it wouldn't be the same without that.

Overall this game plays a lot better than its predecessor and the variety in story and gameplay is more than welcome. The level up system has been streamlined from the ugly, obtuse system used in the last game, and your quest log is well designed and helpful. With so much going on, you could get easily lost, but between the quest log and a chart of character bios/relationships, the game makes sure that you can quickly pick up anything you may forget. Visually, nothing much has changed. The game looks fine, but there are obvious shortcuts (you know immediately how important a character is by how detailed their face is) that would be nice to see improved on in the next full sequel.

With three of the four playable characters being brand new, this game is more approachable to newcomers than Yakuza 3. I'd still recommend 3 first, if only because playing 4 first would make it harder to get past some of 3's little flaws. Both games are great and well worth playing, especially since both are currently sitting around $15 a piece on Amazon.
Posted by surlaw at 1:50 PM