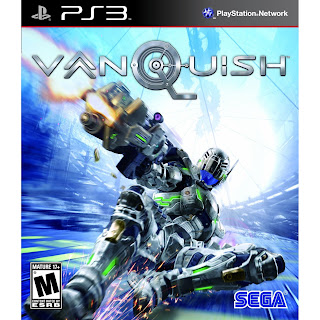 Vanquish is a third-person shooter developed by Platinum Games, a studio founded by workers from the now defunct Clover, directed by Shinji Mikami. Released in 2010, it's Mikami's first shot at directing since 2006's God Hand. From his work on Resident Evil to Phoenix Wright to God Hand itself, Mikami's games do a great job taking serious (or at least dramatic) situations and making them completely silly in the best possible way. His games are allowed to be ridiculous in a completely organic way without feeling cheap or constantly winking at the audience, and Vanquish follows in this trend. While it's not nearly as funny as God Hand, Vanquish is a silly, exciting action game with a lot of heart.

The game's story is decidedly an 80's video game plot; Humans are beginning to live in space, Evil Russians hijack an American space station, All-American Hero Sam Gideon goes in to save the day. It's a dumb plot that doesn't try to be more than what it is, and it feels like a love letter to the kind of plot outlines you find in old arcade shooters. The heroes and villains aren't as entertaining as God Hand's, but they're still fun to play around with.

Gameplay involves shooting lots of robots and sliding all over the place at super high speeds. Sam wears a suit of power armor with build in boosters that allow him to slide all over the place, making just moving from place to place a lot of fun. You can hide behind cover, but it's not a cover-heavy shooter; your score is docked for each second you spend in cover and it's easily destroyed. You have a variety of weapons that can be upgraded as you pick up more copies of the same weapon, and each weapon has both a shooting and melee attack. 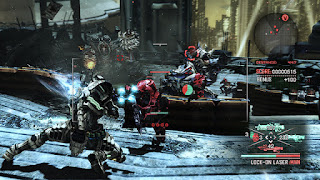 Like Bayonetta, Platinum's previous game, Vanquish allows you to temporarily go into a slow motion state where you can dodge attacks and carefully line up shots. The game is quite challenging even with this option, since you can only stay in this state for short bursts of time. Part of what makes this game so tough is that you only have one meter for everything, aside from ammo. Taking damage, going into slow motion, using melee attacks (aside from the saw blade weapon) and power sliding all drains the same meter, so if you overexert yourself with acrobatics, you'll die in one shot. The meter regenerates fairly quickly as long as you don't over heat. Keeping an eye on this gauge and pushing it just far enough, but not too far, is a huge part of the game.

Vanquish is quite difficult, especially on Hard mode and beyond, but very forgiving. It's very generous about check points and stage breaks. Your weapons degrade slightly if you die, but only the first time you die per area. Like God Hand, tasks that seem impossible become trivial once the game clicks and you start to master its mechanics. The learning curve in both games seems steep at first, but pays off in an extremely nice way that makes going back to earlier stages and replaying them much more efficiently quite satisfying.

The main game is fairly short: You'll finish your first play through in under 10 hours. The harder difficulties are worth trying, and there's an arena mode that's much more difficult than the main game. There are also collectibles in the form of statues to shoot, but there's way too many of them to ever find without looking them up online, and no reward outside of a trophy/achievement. I had no interest in these, in spite of performing the similar task of collecting the Kerotan frogs in every version of Metal Gear Solid 3 I've owned. Maybe it's because the frogs have a satisfying warble when you get them.

Vanquish is a quick, intense arcade inspired experience. Bosses are huge and exciting, smaller enemies are simple but fun to fight, and the pace is great. If it were longer, the game would begin to get tedious, but its length feels perfect to me.

My one gripe with the game is that the opening and closing CGI cutscenes do not mesh with the rest of the game at all. They both contain incredibly graphic violence, particularly the ending, which soured me a little bit on the whole experience. The rest of the game is practically bloodless, so it's bizarre to see the amount of gore in these two scenes. The game absolutely does not need it, and it makes it feel as if these bookend scenes were made by a completely different team from the rest of the game. The fact that one of the most horrible bits involves someone who is clearly based on a real person is very uncomfortable and the game would be better without it. Vanquish is a silly game, but there's no need to go so grotesque at the last minute.
Posted by surlaw at 2:28 PM