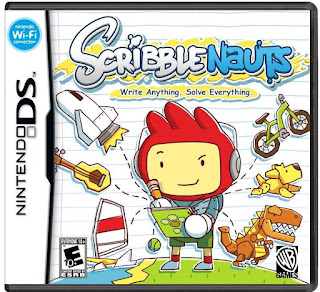 
The objective of each stage is to cross an environment and pick up a star that is somehow trapped or out of reach, while using whatever you want to write down in order to get to it. The premise is great, and there are an enormous amount of words available (the developers say around 30,000). You have around 200 levels to solve, but the novelty runs out very quickly when you realize how poorly the game is actually designed.

There is a huge number of items, but the vast, vast majority have literally no use. You can eat food, but there's no reason to. There are hundreds upon hundreds of obscure, very specific food words in the game that all use the same sprite and all have the same use (none). The developer made sure to get plenty of internet memes in there, so you have Keyboard Cat and Cthulhu, but you don't have a baseball pitcher, which is ridiculous when there's a puzzle where the objective is to strike out a batter. You've even got a stage where Ceiling Cat is an actual part of the puzzle. This game knows its audience, and unfortunately, it's not me.

When the game launched, reviewers said "It will be weeks before you encounter a word it doesn't know!" Well, it took me a matter of days, as it couldn't give me a pitcher and it didn't recognize "grandpa" (it DID recognize "grandma"). But hey, it has "Longcat!" In addition to words you expect to be there not being there, the game's syntax for variously sized objects makes no sense. "Large Air Vent" is proper syntax, "Large Ice Block" is not. You'll have to use "Ice Block Large" for that. 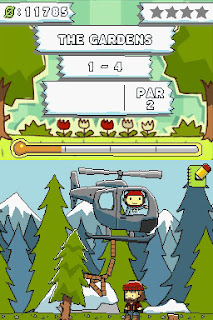 The AI in the game is a major problem, showing how limited the game is. There's basically a food chain of interactions; X always attacks and kills Y. That's all they're going to do. If you give a baker dough and an oven, he will consume the dough, as will any other human NPC you create. He will never interact with the oven. Almost all enemies can be eliminated by giving a character a gun and shooting at them or spawning a black hole next to them. AI characters are sometimes programmed to interact with objects, but only very specific ones. If you give a lumberjack an axe, he will attack a tree, since that's in his food chain. And yet, when you reach a puzzle where a boy wants to break a pinata, giving him a bat or a stick does nothing.


Physics are a huge problem too. Non-vehicle objects seem to have no weight, so objects will go flying away when bumped into, even if there's no reason walking into a tree would make it fall over. Anything can be carried by attaching a chain to it, no matter what it is. On top of that, platforms you create function horribly. There's a puzzle where I need to get a king to cross a gap, so I provide a bridge. Instead of jumping onto and walking across the bridge, me madly runs against it until it collapses and he dies. I give him a chain to walk across. This works, until his knight walks across and then falls through. One character crosses fine, the other doesn't. NPCs will often fall into holes/off screen with no way to retrieve them simply because the physics are broken.

The final major problem in this game is the control of the player's character. Rather than moving him with the d-pad, you tap the screen and he runs to where you tapped. However, since you spend a lot of the game tapping on small objects to move them, you're going to accidentally make your guy run off of cliffs a lot. His physics are as floaty and broken as the rest of the game's, and it makes even simple movement frustrating at times.

This is a game that begs for creative solutions, but even things that would work in the real world often do nothing. Instead, you can solve 99% of the game's content with a chain/rope and a flying vehicle/animal. This isn't fun, but it's what you end up doing after trying to spawn two dozen items and seeing none of them do anything. If you just want to say "could a Necromancer beat an ogre in a fight?" you'll have fun for a little while (also, when I say "fight" I mean "the two sprites bump into each other for a while and then one falls over"). If you want to solve puzzles in a creative manner, you're going to spend hours frustrated by poor physics, uselessly basic AI, and sloppy controls. I haven't played the sequel; I didn't want to get burned again. Maybe it does some things right. As it stands, I believe Scribblenauts may be the most over-hyped game I've ever played.
Posted by surlaw at 11:52 AM