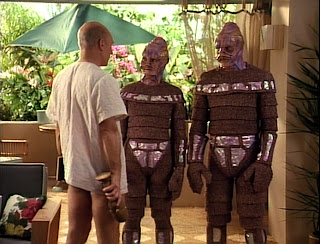 "Picard takes a much-needed vacation on Risa, but unwelcome events keep interfering with his rest."
This episode features Patrick Steward in horrendous poofy booty shorts, Max Grodénchik in his first appearance as a Ferengi (but not as Rom) and the first of Vash's three appearances across this series and DS9. She's ok here, but there's still no real chemistry between her and Picard. This is the only episode where she's tolerable; her second TNG appearance is terrible and she's the star of one of the worst episodes of DS9.

Riker tricks Picard into buying him an "I'm lookin' for lovin'" sign and who knows what terrible things he gets up to while the captain's away. He looks a little too satisfied the entire time. There's also some stuff with time traveling aliens with oven mitts on their hands being ominous and sneaky.

No words can really express how bad the costume design on Picard is in this episode. 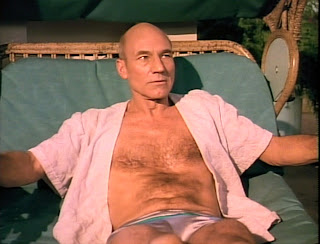