When I first played Sega's 1983 arcade shooter based on the original Star Trek, I had no idea what was going on. I seemed unable to take damage, almost no enemies appeared, and the game ended after I defeated a Klingon Bird of Prey in the fourth stage. I assumed I just didn't get the game, but it seems that something had actually gone wrong with it. I recently returned to Funspot and gave it another shot, and this time, the game actually worked! I'm re-reviewing it now that I've actually had a chance to play it and know what was going on.


Star Trek 1983 is an Asteroids-style shooter with simple styled vector graphics. Players sit in a Captain's Chair-shaped unit and can rotate the Enterprise using a dial on its left side and thrust forward or fire weapons using buttons on the right. There's a phaser button and a photon torpedo button for attacking and a regular thrust and a warp speed button for movement. 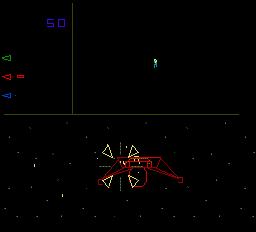 As you fly around, a digital simulation of Leonard Nimoy's voice encourages you on your mission; shooting down Klingon ships, docking with Federation starbases, avoiding mines. The top half of the screen displays shield strength and shows you a map of the battle field, with the action cramped into the bottom half. This isn't an attractive game, even if the Bird of Pray models are decently recognizable. It's not a very Star Trek-feeling experience as a game, but the Captain's Chair is pretty great in presentation. When it comes to this style of game, Space Fury, also released by Sega a year earlier, plays and looks a lot better, and the original Asteroids feels much cleaner. Star Trek 1983 is a fun novelty, but not something to seek out unless you're a big Trek fan. 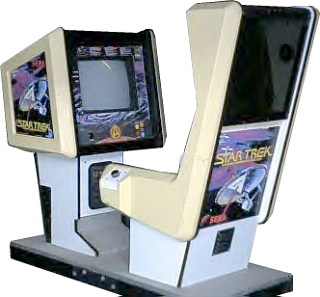