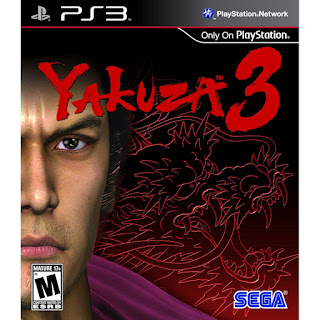 Yakuza 3 is the third main-series installment of Sega's open-world tough guy games. It follows 2008's Kenzan, a spinoff set in early 17th Japan. Yakuza 1 and 2 received Western releases (the first game is the only one to receive an English dub), but Kenzan never left Japan, leading some to worry that the series was dead internationally. Negative comments from Sega of America didn't help matters. Yakuza 3 was released in Japan in 2009, and it wasn't until a whole year later that a translated version was released in North America. There was alo some controversy from fans around its release, as Sega announced in advance that certain content would be cut from the North American release.

Some people see "open-world game about mobsters" and assume the Yakuza series is a Grand Theft Auto knockoff, which couldn't be further from the truth. If anything, the series is a spiritual successor to Sega's own Shenmue series. You don't drive cars, you can't terrorize people on the streets, and it's extremely rare that the hero kills anyone. When he does, the game makes a very big deal out of it. The only similarity between the two series is that both set you down in a large, crime-ridden city and let you wander freely. What you do while wandering couldn't be more different.

The star of the series is Kazuma Kiryu, a former Yakuza member who now lives a quiet life running an orphanage in Okinawa with Haruka, who is essentially his adopted daughter. Their peaceful life is uprooted when a land development project threatens to purchase the land Kiryu's orphanage is on. If that sounds boring to you, you're going to hate the first three hours of the game, because that's the main content of the opening act. The story later expands beyond Okinawa and into Kamurocho, a seedy district of Tokyo that served as the setting of the first two games in the series. The head of Kiryu's former Yakuza family is shot, his father seems to have returned from the dead, and international conspiracies begin to unfold.

The story is slowly paced and there's nothing wrong with that. The whole series has a fairly relaxed pace, both in the way cutscenes are played and the way you explore the city, so it's not what you're looking for if you want a heavy action game. For players new to the series, the game contains about thirty minutes of recap videos explaining the events of the first two games, and as Yakuza 3 was my first time with the series, I was grateful. Outside of trying to remember a few too many names, I had no problem following the plot.

The tone of the main story is melodramatic and the tone of the substories you encounter is largely comedic. There's a great, silly sense of humor that flows throughout this series, and some of the events you encounter are completely outlandish. Kiryu taking them all in so straight and learning something useful from even goofy events like seeing a business man leave a strip club and attempt to pole dance on a streetlight (watching him gives Kiryu insight into developing a new wrestling move) makes the game even funnier. It's essentially a soap opera mixed with The Three Stooges with a hearty dose of punching thugs to teach them manners. 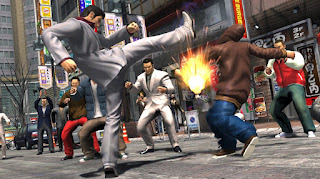 The game's combat is largely hand-to-hand. It's not as deep as a true fighting game, but it's deeper than an arcade beat-em-up. You have a series of punches, kicks, and throws which can be punctuated with fairly brutal special moves that are executed when your Heat Gauge is full. This meter increases as you deal damage and decreases as you receive. Knowing when to use a Heat move is important in many situations, and they are performed by pressing the correct button that appears on your screen. The game is generous about the timing here, so it's hard to fail.

Aside from story-driven fights, you'll also get into random encounters while walking down the streets of Okinawa and Kamurocho. As Kiryu is a good-hearted guy, he never starts a fight, but he's always up for brawling, as long as he can teach his enemy a lesson after it's over. Don't scam old people. Don't threaten nerds. Don't give someone guff for walking down a street drunk (There's nothing the punks in this game hate more than drunks). Most importantly, show respect to the homeless. These encounters can become tiresome if you have other places in the game you'd like to be, but most can be avoided simply by ignoring the punks that yell at you and continuing to run along on your way.

On top of the story and combat, the Yakuza series also features a number of minigames to pass the time/win money. You can visit batting cages, go golfing, go fishing (Like most video game fishing, it's pretty bad), bowl, play darts, pool, arcade games, and more. Some of these activities are connected to side story content, but most are just there to have fun messing around with. You can spend way too much time trying to win stuffed animals from a claw machine or perfect your bowling stance. Unfortunately, not all of the minigames in Yakuza 3 made the transition from Japan to America.

Three minigames are missing from the North American release; Shogi, Mahjong, and a trivia game. I can understand not wanting to translate and rewrite a trivia game that apparently focused heavily on Japanese history and pop culture, but translating Shogi and Mahjong involves nothing more than making an English version of their in-game manuals. It would have been a minimal time investment to translate these two, so I can only assume that Sega cut them to get this game out as cheaply as possible, which is a shame, as both are pretty fun games.

The other major cut content in the North American Yakuza 3 is hostess dating. In the original release, you can go to Hostess Bars, which are basically places where women are paid to flirt with you as you buy them food and drink, as well as teaching your own hostess how to best apply makeup and learn interesting trivia. This probably sounds kind of creepy, but you have to remember that this series doesn't take itself seriously outside of the main storyline, and instead, the hostess conversations are actually pretty funny. The awkward, embarrassing way your hero tries to impress the ladies is funny stuff, and it's a shame it was cut. I don't think it was removed for cultural reasons; I think, again, Sega is lazy and cheap. There is an enormous amount of dialogue in the hostess sidestories, and I think Sega looked at that, saw how easy it was to close it off from the player, and went with the most cost-effective solution.

Sega didn't even go all-in on removing these minigames from the English version. The buildings still show up on your map as key locations, you just can't interact with them once you visit. You can still see the ends of the stories of the hostess girls, which usually involves going with them to a random location and fighting thugs for one reason or another, but the actual dating part is gone, along with 95% of their dialogue. Instead, you just talk to them inside Kamurocho's equivalent of McDonald's and accept a quest from them. It's lazy and poorly done.

So, does all of this ruin the game? Not at all. It's a fantastic game and is a lot of fun from start to finish if you can tolerate slow pacing and long cutscenes. My only major complaint (aside from the cut content) is that way too much of the plot is revealed in one enormously long text-based info dump towards the end of the game. It makes the end chapters seem rushed, which is kind of astonishing considering how leisurely the rest of the game is.

I personally think Yakuza 4 is a better game; it has no cut content, it has four playable characters with unique fighting styles, and since three of those four characters are new to the series, it's probably an easier way to start out with the series than 3. You'll miss out on a lot of good call backs and story revelations if you start with 4, though. My advice is to start with 3, watch the recap videos, and tough it out. In a world full of machos, don't make yourself look like a wimp by refusing to sit through some movies and teach children about manners and fashion. 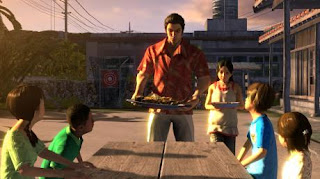