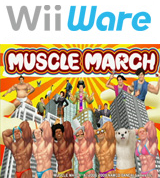 The Wii certainly has no shortage of party games, many terrible, some spectacularly fun. With very few exceptions, the good ones tend to be first party Nintendo titles, with Wii Sports and WarioWare: Smooth Moves being two of the best. While those games have given me plenty of fun over the years, the one that always ends up coming out when we've got a group of people playing games is a bizarre $5 digital download released in early 2010. Even three years after its release, I still think Namco's Muscle March is one of the most entertaining games on the system.

Muscle March is a simple premise; players strike one of four poses using the Wii remote and its nunchuck, matching an on screen pose. The execution is simply bizarre; players control one of seven characters (five musclemen, one musclewoman, and one polar bear) as they pursue a thief who has stolen their protein powder. The criminal stampedes through a city, a medieval village, and a space station leaving man-shaped holes in the walls he bursts through. Players must mimic poses that match these holes in order to safely navigate these treacherous worlds. Once you've reached a certain point, the stage switches to a side view, during which players shake the controllers as quickly as possible to attempt to tackle their foe. 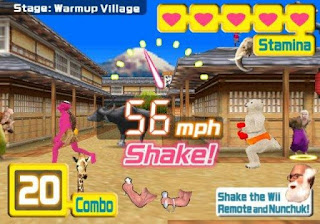 Muscle March was originally produced as an arcade machine but never released publicly. The original version had players holding onto two dumbbell shaped joysticks, moving them forward and back to move their on screen muscleman into various poses. The Wii version is a lot funnier, since watching your friends make fools of themselves flexing is much better than just pressing up or down on a stick. The controls are, unfortunately, not super responsive, and you can take damage by colliding with walls improperly even if you're standing in the right pose due to the slight lag between your movements and your on screen character's.

Each of the game's three stages consists of three parts. The first two thieves to chase vary by stage, but the final opponent is always the glistening blue Mech Muscle. The first two parts are fairly easy, but catching Mech Muscle requires some pretty quick reflexes as he continually tries to trick you into flexing the wrong way. After the three parts, you are greeted by God, who ranks your machoness based on how many times you missed and how many times you had to restart a stage. The ultimate rank, Muscle God, requires perfect play. 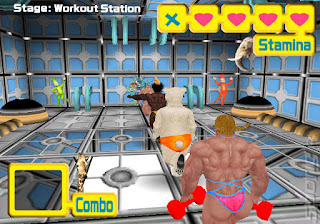 The game's art and music is charmingly nutty. Every track feels straight out of Namco's Katamari Damacy series, and becomes faster and more frantic as stages intensify. The game's characters are all bulging meatheads with a variety of superficial personalities, including the football player, the nerd, the punk rocker, and the guy with an afro with a chicken living in it, a bizarre design that crops up again in Final Fantasy XIII.

In addition to Mech Muscle, the villains are a rival football player, an alien, a kappa, Nobunaga, a pair of creepy rabbits, and a robot. The rabbits in particular are horrifying. While your heroes and villains are 3D models, the people and animals that live in the towns you parade through are all 2D sprites, rotating and thrusting instead of having actual animation. Somehow, this works perfectly. 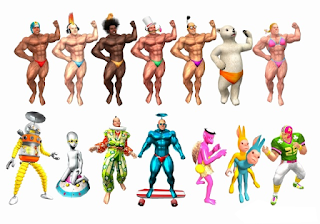 In addition to the standard arcade mode there's Endless Mode, where players chase a golden Mech Muscle up a rainbow ascending into space. This game mode becomes increasingly fast as you clear walls. This is advertised as the game's multiplayer mode, but sadly, you won't be flexing in sync with your bros. It's purely one player at a time, and players just take turns once each one fails out. It's a score competition, but in a way that you could just set up on your own without having to call it a 2-4 player mode. Simultaneous play really would have made this much better.

There aren't a ton of games that I feel absolutely needed the Wii's motion controls to work, but this is one of them. In fact, it may be my favorite motion control game period. It's not something you'll play all day, but at $5, it's just fun enough to keep coming back to for an hour with friends every now and then every few months. The joke still hasn't gotten old to me and the gameplay is still solid, even if not perfectly responsive. It seems kind of insane to say that this is one of the best games on the Wii, but, well, it honestly is. I'm sad that there's never been a followup; I don't even own a Kinect, but this seems like the perfect game to port to it and I'm let down that Namco never has. We need a next-gen Muscle March with twice the bros, twice the worlds, and online leader boards.
Posted by surlaw at 1:12 AM