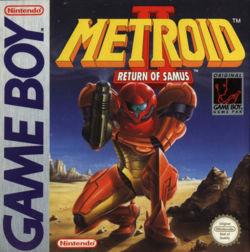 I remember playing Metroid II briefly when it was fairly new and having a pretty bad time. I got lost way more easily than I did in the original 1987 NES title, I had trouble seeing what was going on, and I didn't make it very far. That was 1991 on an old green screen Game Boy. Today, playing the game on better hardware, I can see what's happening a lot more clearly and have a lot more patience for figuring this game out. I still get lost way more often than I did in the original.

Like Kid Icarus: Of Myths and Monsters, Metroid II is a follow-up to a popular NES title that ended up on the Game Boy instead of on its predecessor's console. The original Kid Icarus and Metroid titles share a number of development staff, with producer Gunpei Yokoi overseeing both titles. While Of Myths and Monsters went to a different team, Metroid II actually kept a lot of key staffers from the original game, including Yokoi himself. As a result, the game feels like a true, organic sequel to the original title, unlike Kid Icarus's simplified (though still fun) continuation. Interestingly, while the original Metroid was released in Japan a year before its US release, Metroid II would come out in the US a couple of months before being published in its home country.

Metroid II continues the basic premise of the original game; players control bounty hunter Samus Aran, alone in a dark, lonely alien world. This time around, Samus has been tasked with returning to the site of the previous game and wiping out any remaining stock of the energy-absorbing Metroid aliens, which she quickly finds have begun evolving into more complex forms. The original game's bosses, Ridley, Kraid, and Mother Brain, do not return, making this one of the only Metroid titles that doesn't feature at least some recurring villains. That mixed with the "hunt and destroy X number of Metroids to unlock the next area" premise makes this game stand out as pretty unique in the series.

Control of Samus has improved massively from the NES title. You can now crouch, shoot downward while jumping, and control your jumps in a much smoother manner. You can still morph into a ball and roll around, but now also earn the abilities to stick to walls and jump while in ball form. This leads to a couple of moments where the game's pace crawls a bit as you slowly roll across walls and then ceilings, but for the most part this game's movement and stage design feels a lot faster. You can still only use one type of special beam weapon at a time, but there's only one area where an exact weapon is required, and the designers generously placed it right outside.

I really like how Samus's sprite looks in this game and the Metroid designs are pretty great too. There are a few too many minor, forgettable cannon fodder enemies, but the monsters are generally solid. The environments don't look bad, but unfortunately being in low resolution black and white makes them look way too similar after a while, which is the main reason I found it way too easy to get lost. Getting lost is part of the fun of a Metroid game, but having different areas colored drastically different from one another kept it from getting too annoying in the original game. If everything else was left the same but the game was moved to the NES instead, giving us full color graphics, Metroid II would be a much smoother experience, at least for me. If you're good at memorizing each area's tileset, I envy you there.

Music is a bit of a mixed bag. I really like the main theme that plays for a good portion of the game, but the rest of the soundtrack ranges from ambient noise to forgettable discord. It's not actively bad, but it's not something that stuck with me, and once you obtain the noisy Screw Attack upgrade, you're going to hear it even less. I like the awful electronic howls the Metroid evolutions make.

Stage design is mostly smarter than the original game's, but still oddly inconsistent. While there's nothing as good as the final area of the original Metroid, there's nothing actively bad. The game is divided into several zones that are blocked off from one another by lava; as Samus defeats Metroids, the lava drains. There were a couple of times where I had to look online at a map to figure out where the lava just drained from, but as a mechanic, it works, even if it doesn't make any sense. The worst thing about the game's design is that the second main area of the game is by far the most confusing and labyrinthine to me; once I was through there, which did take some help, I had pretty much no trouble with the rest of the game as far as exploration went. I had an awful time beating its final boss, but that's another matter altogether.

Metroid II was a pleasant surprise for me. I wasn't expecting much, given my sour experiences with it 20 years ago (a statement that kind of blows my mind to write), but it's actually a pretty solid title. I think it's perfectly fine to peak at a map every now and then, and feel that the game really would have benefited from having a built-in map that wrote itself as you played. Thankfully, the next game, Super Metroid, would address this. While I don't think Metroid II is as good as Super Metroid or Zero Mission, I definitely think it stands above the original game. The single saddest thing about Metroid II is that a full color re-release on Game Boy Color WAS in development but was quietly cancelled.
Posted by surlaw at 10:42 PM