For the final part of my look back at 2018 I'm going to spotlight my top five TV series of the year. I haven't watched a wide enough variety this year to write a more extensive tier list, so feel free to recommend some of your favorites to me!

This list is presented in alphabetical order. Every show here is focused heavily on memory, whether it's an absence of memory, a repression, or an examination. 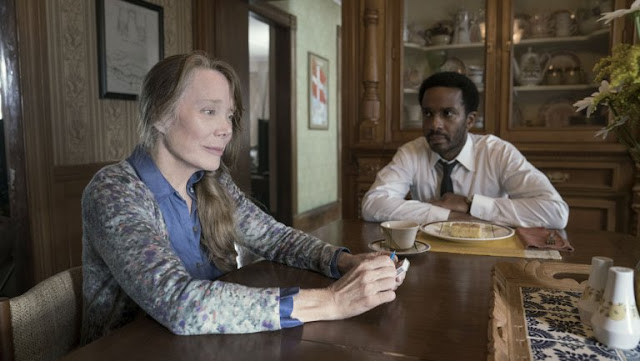 Castle Rock (Hulu) - The only show on this list that I auditioned for! This amalgamation of Stephen King characters, places, and themes was largely filmed in locations within an hour's drive of my home, so it was a lot of fun seeing so many places I recognized re-appropriated into bits and pieces of this nightmare town. Set in a town that either drives people to evil or summons the wicked to it, Castle Rock is full of murders, mysteries, and lost memories. Most of the show focuses on quiet character building rather than horror, with an undercurrent of dread and loneliness beneath it all.

There's a wide ensemble cast here, but the standouts are Sissy Spacek's Ruth Deaver, a woman spiritually and mentally lost in memory, and Bill Skarsgård's nameless, often silent mystery man whose identity features as one of the show's core questions. I'm mixed on the ending itself but otherwise this is a strong show, especially for King fans, and does a better job incorporating ideas from the Dark Tower series than the actual Dark Tower film did. 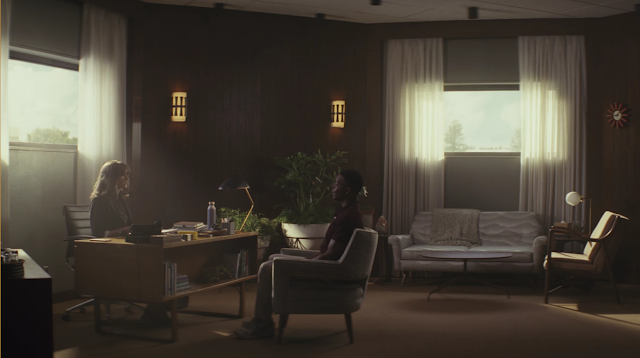 Homecoming (Amazon Prime) - Incredibly well paced, great visual style, and a story that keeps everything personal instead of spending more time than necessary on the sci-fi/world building elements. Each episode is a tight 30ish minutes and not one of those minutes feel wasted. I'm all into anything that messes with picture size/aspect ratio/framing on a regular basis! In this case, we follow Julia Roberts' Heidi Bergman, a counselor at a clinic for rehabilitating traumatized soldiers, in both the past and present. She's dealing with her own trauma and missing memories, and in times where she has a less-than-complete picture, so do we, with the screen ratio tightening and restricting our view. It's a convenient way to separate two parallel stories in a cute, clever way.

Both Bergman and his principal client, Walter Cruz (Stephan James), are quiet, nuanced characters whose relationship shows genuine warmth and kindness in the middle of a dark story. This series feels very complete at ten episodes. There's a mid-credits scene which sets up a second season, but I'm happy to see Heidi and Walter's stories conclude here. 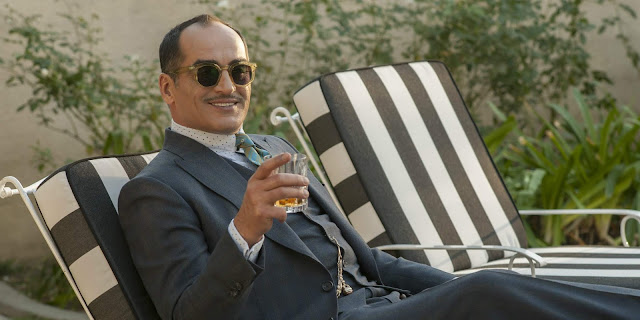 Legion Season 2 (FX) - The continuation of Noah Hawley's X-Men spinoff remains the most bizarre and ambitious take on the franchise in film or television. A year after the first season ends, we're reintroduced to Dan Stevens' David Haller and dropped into a world that looks markedly different from what we remember. The setting is wilder and situations more surreal than before, but for the most part our cast of mutants don't remark on it. There's a suggestion here that David's ability to rewrite reality has heightened beyond his own comprehension since he separated from his longtime mental parasite, a man called Amahl Farouk (played with incredible, uncomfortable charm by Navid Negahban.) Rachel Keller's Syd becomes a stronger presence and Aubrey Plaza's Lenny takes a very sharp turn. My only complaint about the main cast is that Jemaine Clement's Oliver doesn't get to have as much fun this time around.

This season focuses more on mood than plot, so it's easy to be turned off even if you enjoyed the first season, but I was completely captivated. The soundtrack, largely consisting of gloomy covers by Hawley himself, is one of the year's best, and there's some excellent direction by Ana Lily Amirpour and John Cameron. The standout episode was one which explored a variety of possible lives David could have lived had things turned out just a bit different. Also, major props for finding remarkably creative ways to portray psychic battles without just showing people grunting while energy beams move around. 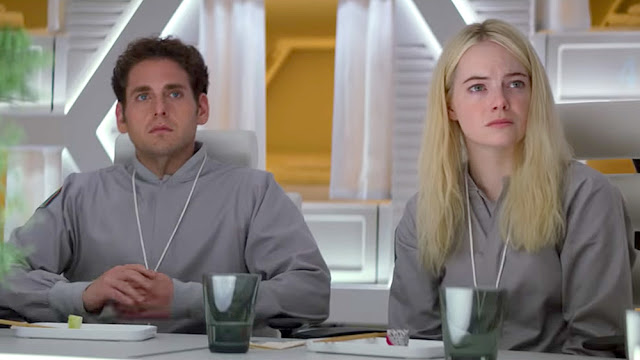 Maniac (Netflix) - Starring and produced by Jonah Hill and Emma Stone, Maniac's impossible to fit into any particular category. We've got subtle comedy, pure slapstick, romance, over the top action, melodrama, grounded character drama, and just about everything in between. A solid 10 episode show that feels more like a 6 hour movie,  Maniac features excellent pacing and production design. Hill and Stone are both excellent here; it's a surprisingly subdued role for Hill and I was very impressed!

The show focuses on a group of test subjects using a new drug to clear out old traumas and find inner peace; it's sold as a cure-all that obviously won't end up curing all. The subjects enter a dream state that allows them to live out alternative lives symbolically connected to their personal trauma as a way of reconciling their issues, which for the show means we get to see a wide range of visual and tonal styles piling on top of each other. It would be very easy for a show like this to become completely incoherent, but by keeping the focus mostly on Hill and Stone's subjects we're able to find a constant personal grounding in the middle of it all. 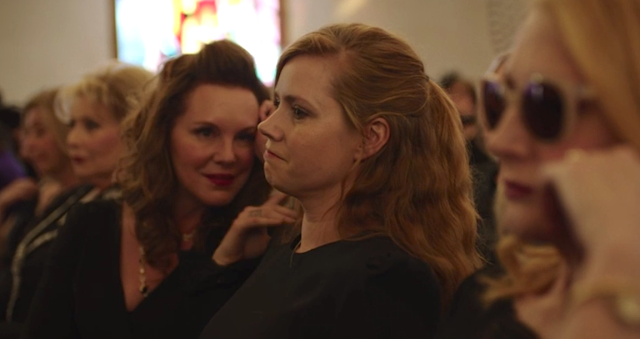 Sharp Objects (HBO) - My pick for this year's best show, featuring a great cast with excellent directing (Jean-Marc Vallée, who I'm normally mixed on but did a fantastic job here) that really gets under your skin and does an incredible job visualizing the kinds of fears and terrible thoughts that can pop into your head and be gone in a flash. Amy Adams is always great and I love the Southern Gothic/rotten Americana vibe.

At its core, Sharp Objects is a fairly standard murder mystery focused on rotting, small town politics. Its powerful cast and focus on familial horror (both minor and major) elevate it greatly, with the investigation often taking a backseat to the day to day miseries of the town of Wind Gap. Adams' Camille Preaker is a journalist who returns to her hometown after a long absence to cover a recent murder and possibly reconcile with her family and extinguish some old ghosts. There were times when I related way, way too much to Camille, an unconventional lead who shows a great deal of strength in the face of immense burdens.

That's all for the Wobble Reviews Year in Review for 2018! I'm skipping my usual article on new music this year; there wasn't enough that I listened to that compelled me to write a full article, but my favorite albums were Lily Allen's No Shame, Merrie Land by The Good, The Bad & The Queen (a new project led by Damon Albarn) and Dr. Octagon's Moosebumps. Hoping to check out a wide variety of new albums in 2019!

Email ThisBlogThis!Share to TwitterShare to FacebookShare to Pinterest
Labels: 2018, tv, year in review