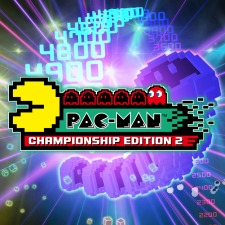 When Namco announced a new Pac-Man Championship Edition game I was totally hyped. The original version, released in 2007, and its 2010 sequel Championship Edition DX were my favorite of the arcade retro-revival titles, with DX improving on the first game in a number of ways. I assumed CE2 would be more of the same, an iteration that improved and expanded on existing mechanics, but to my surprise, Namco's latest Pac-Man game goes in very different directions.

Championship Edition 2 feels less like an expansion and more like the original rules reinterpreted and evolved in a new manner. I feel that DX remains the better game, but I do have to applaud Namco for trying something new with their sequel instead of taking a safe course. 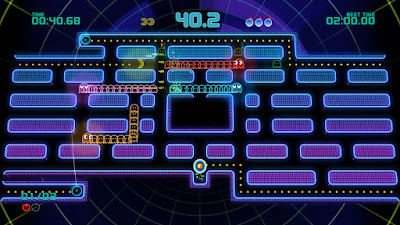 At its core, the Championship Edition games are all still classic Pac-Man: Eat dots, avoid ghosts, find Power Pellets to take revenge on the pesky ghouls. Championship Edition changed things up by turning up the speed, introducing progressive mazes where clearing half of a board would transform it into a new shape, and using hypnotic audio and wonderful neon visuals. Rather than playing stage by stage, CE used timers, with players fighting for the highest score in a five minute run.

Along with new stages and new timed mini-trials, Championship Edition DX continued the course of its predecessor while introducing a fun new element: Ghost Trains. Each stage of DX was littered with sleeping ghosts who would wake up when passed by, joining forces with the main four ghosts, forming a glowing rainbow of ghastly danger. There was a great risk/reward system in place here: Waking up more ghosts meant more danger on the map, as longer trains could crowd passages, but offer far more potential points. 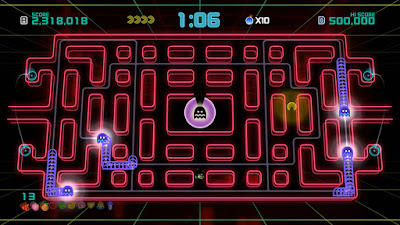 Championship Edition 2 makes huge changes to both of these elements. Players no longer need to eat the pellets on half of a screen to unlock the next phase; instead, you have a meter that fills up with each pellet you eat, anywhere, until you have enough to awaken a fruit or a Power Pellet in the center of the stage. Eating fruit drops you into the game's next stage; sometimes, your food runs away from you.

Ghost behavior is greatly changed. There are still sleepers, but passing by them causes these mini-ghosts to jump to the nearest main ghost and form a train, rather than waiting for a pursuing ghost to pass them by. This seems like a minor change, but it makes for a big difference in play style. Once you've eaten a Power Pellet, it's no longer simply a matter of turning around and gobbling your pursuers; now, ghosts fly to other parts of the stage and follow displayed paths, moving erratically around the stage at extremely high speeds. 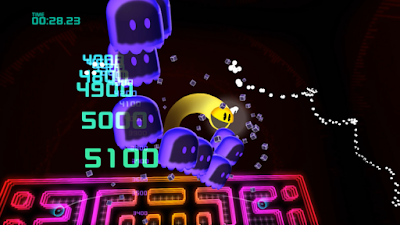 While I'm open to most of CE2's changes, I'm not a fan of the new Ghost Train system. You can only eat trains that you hit from the front, so bumping into the caboose just bounces you around and wastes time. The trains move so quickly that you have to predict their movement perfectly, lest you miss and waste time chasing them down again. This certainly makes for a more challenging game, but it's less fun, due to how random their movement can feel. On some stages, you can more predictably herd the enemy, but on others, it's a mess. On eating the final Train in a stage, the camera goes into space and gives you a quick cutscene where the player has no control input; this looks very cool, but for me, it brakes my concentration just enough to take me out of the game.

Another major ghost change is that you no longer lose a life on contact. In DX, the game would slow down when a player was about to die, giving them a split second to reverse course or to use their Bombs, a panic-button item that would warp the ghosts back to the center of the stage. In CE2, ghosts are harmless until you make them angry. You can bump into a ghost three times (less on higher difficulties) before they pop into the air and become aggressive. This changes strategy in a large way; you no longer plan out paths around the ghosts, but rather, path through them. Bomb behavior also changes in a subtle but important way, as they send players back to the stage center now, not ghosts.

The core game is still a five minute timed score attack. DX's ten minute mode is weirdly absent, as is its Ghost Train trial and its mini time trials for each stage. Instead we have Adventure Mode, a series of dozens of short stages similar to, but larger than, those old time trials. Due to the sometimes random nature of ghost consumption here, it's harder to form a successful plan of attack. Again, this is more challenging, but I found it less satisfying. 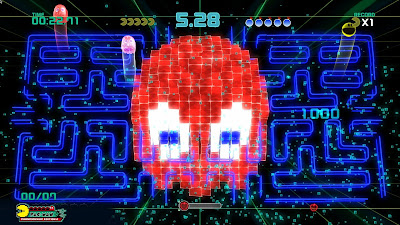 Clearing Adventure stages and Tutorial stages earns you stars which can be used to unlock boss fights. Harder difficulties unlock more stars, and while there's no grinding involved, I still don't enjoy the model. I realize that there's no functional difference between playing all these levels this way versus playing them all in linear order, but the whole "earn stars, open stages" model of arcade game just feels cheaper and uglier. It's a superficial complaint, but there you go.

Boss fights are an odd bit. You play through a few short stages while a large ghost bobbles in the background harmlessly. Each time you eat enough dots the boss will rush the stage, turning that stage's ghosts aggressive and spawning two extra lives. This mitigates the threat of the enemies pretty quickly; you get access to so many free lives that there's little to no fear of a Game Over. Instead, you're rewarded for perfect runs by receiving more stars. Once you finally confront the Boss Ghost at the end directly, Pac-Man eats it in a cutscene with no player input. 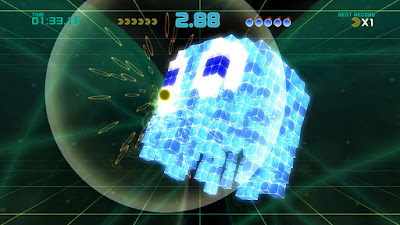 Pac-Man Championship Edition 2 is a well made game with a couple of questionable decisions; the problem is that it's a followup to a perfect game. It's hard to make a sequel to such a good game, and Namco was right to try and do something different instead of just replicating what worked ad nauseum (See: Namco's Katamari Damacy series.) I don't love CE2 the way I did the first two games, but it's nonetheless a solid, exciting arcade title with plenty going for it. I just don't think it will have the longevity of the previous games, and that's a shame; after playing it for a while, I ended up going back to DX instead.
Posted by surlaw at 4:52 PM