I love the original arcade Q*Bert game, its oddball sequel Q*Bert's Qubes, and retro revival games, so an updated Q*Bert seems like it's something that would be totally my thing. Gonzo Games and Sideline Amusements launched Q*Bert Rebooted on phones and on Steam last year, with a PS3/PS4/PS Vita cross-buy release happening this week. It includes the original arcade game as well as a new, modernized take, but it's a surprisingly lazy package.


The original Q*Bert included with Rebooted feels pretty accurate to the arcade version. It controls well with the PS4 analogue stick and includes all of the classic wobbly sound effects. Something's off, though: While the game displays your current high score, it doesn't save it between play sessions. There's no high score board at all, only your current #1, and no online leaderboards. This is a baffling choice, as the whole point of games like this is competing for scores. I don't think I've played a score-attack game that deleted your scores when turned off since the very early 90's. How does this get by in 2015? Also, pressing the Circle button while in classic mode immediately ends the game and kicks you back to the title screen. 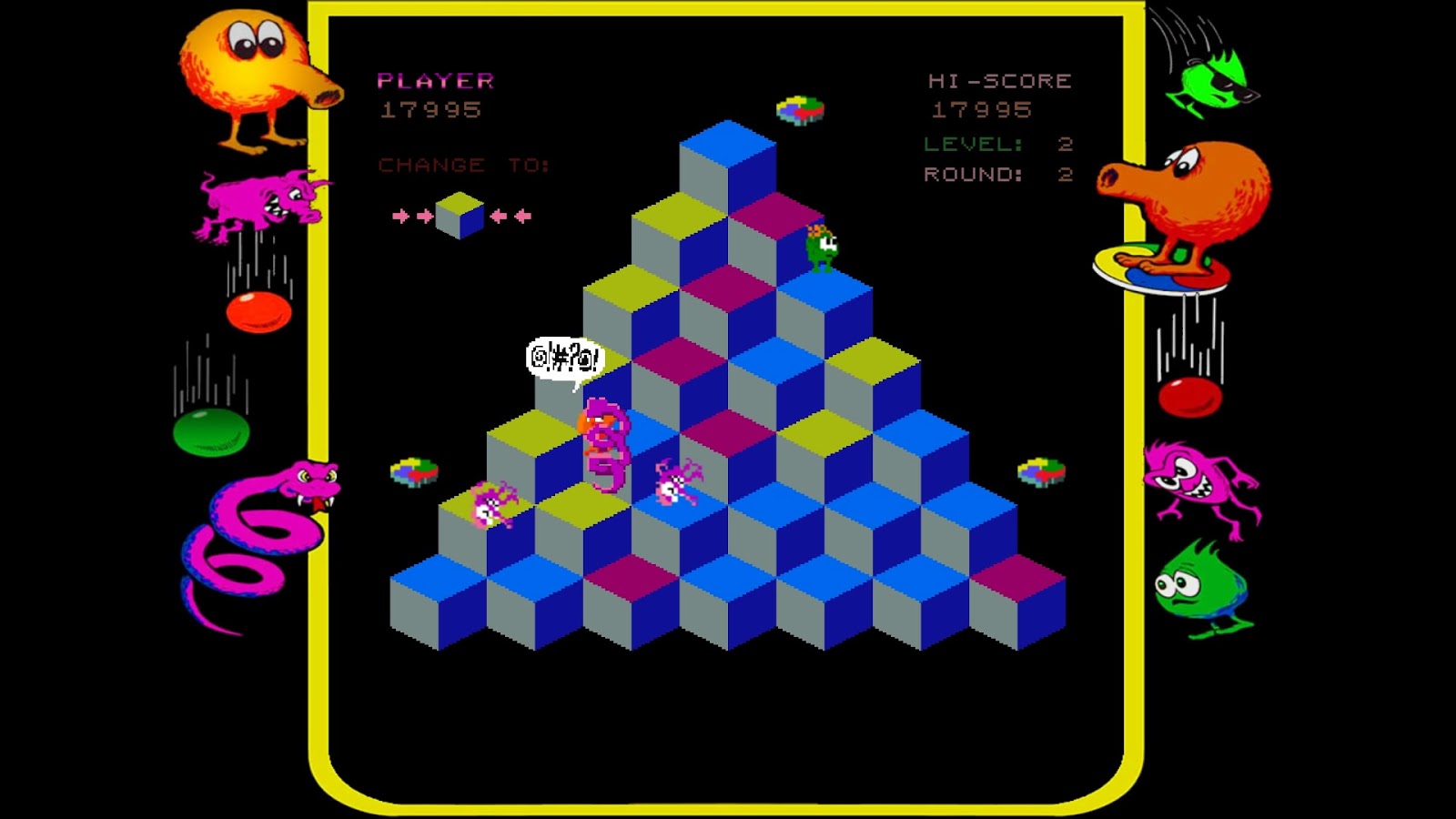 The meat of the game is in the Rebooted mode. Players plop Q*Bert through 100+ stages of hopping from block to block, avoiding snakes while coloring his world. Each level of the game is divided into three stages and a bonus round and each collection of stages has three goals: 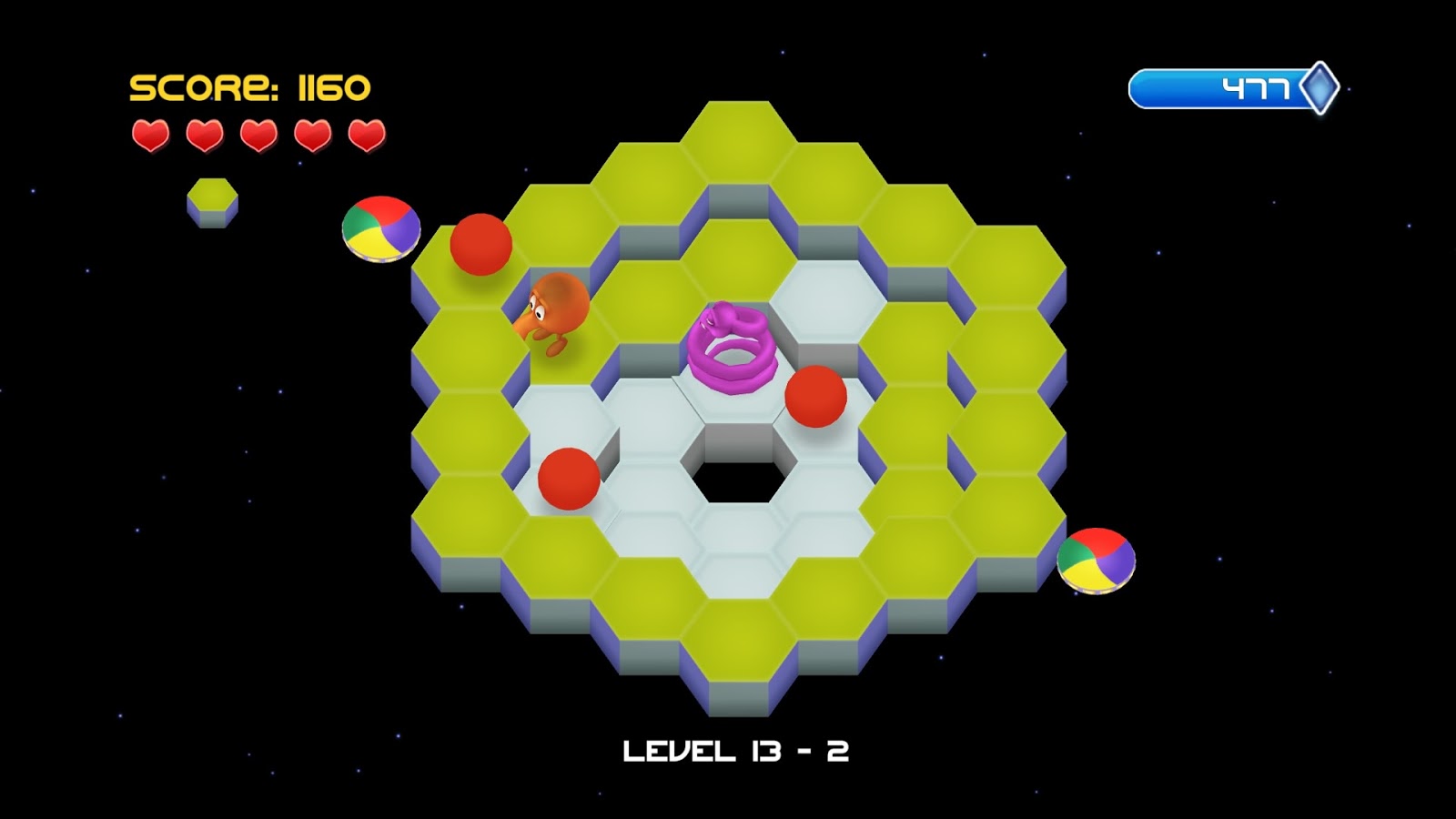 In another absurd decision, you can only complete one goal per run, so if you want to progress through the game you'll have to replay every stage three times, even if you would have met all three goals in one go. It draws out the game and adds a grinding element, which is absolutely stupid in a game like this. Every now and then, progress is gated behind a set number of stars earned from completing these goals, so you can't just keep playing and ignore them. If you want to reach the end, you'd better get ready to repeat everything at least three times. 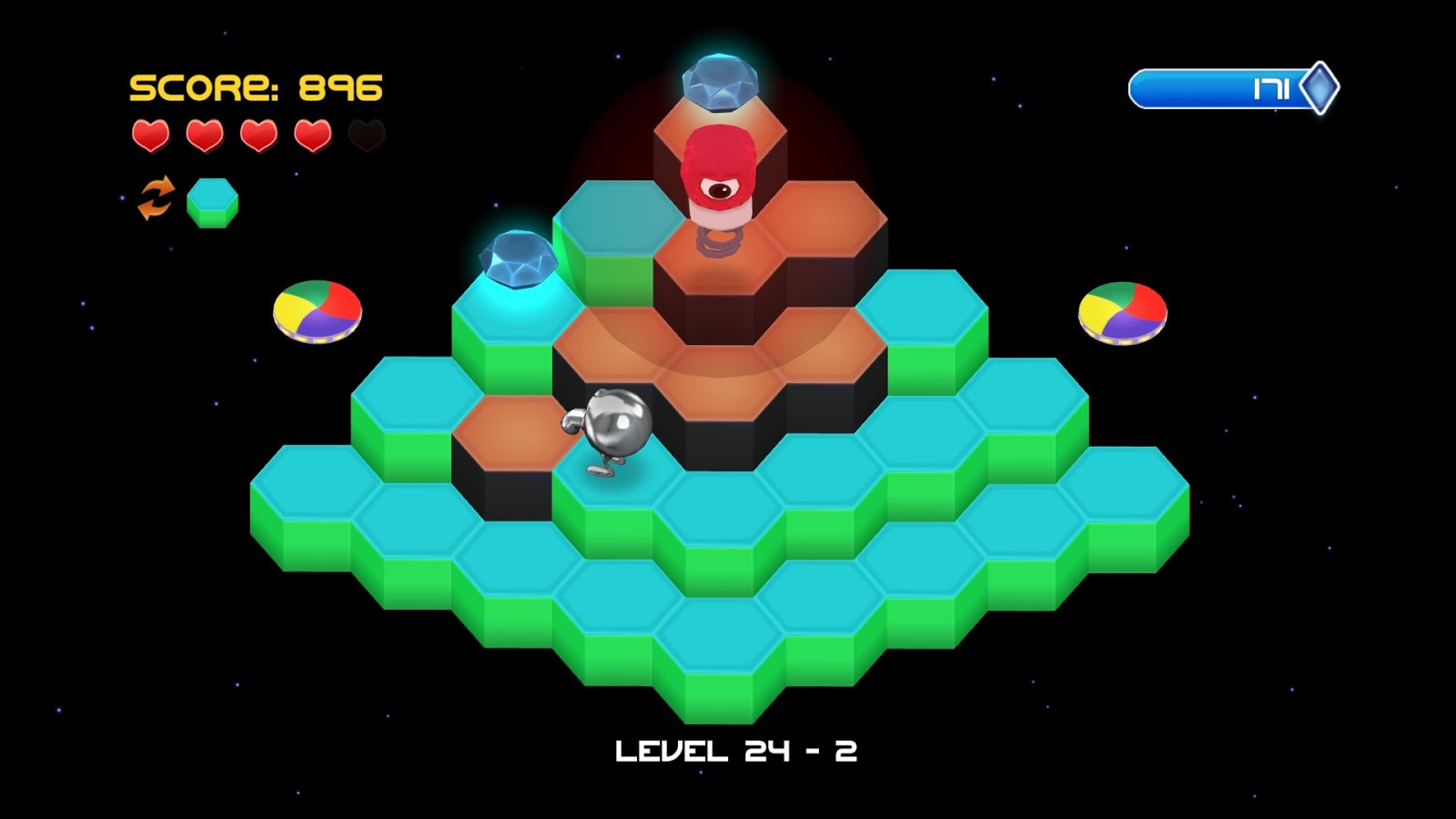 Controls are way too touchy, too. While the original game was designed around hopping on cubes, Rebooted puts you in a field of hexagons. This would be fun if the controls were tight, but they're so loose that it's really easy to accidentally jump in the wrong direction, and now you've got more directions than ever before with which to jump off ledges. You also respawn nearly immediately, so if you lose a life holding the wrong direction and don't immediately let go of the stick, there's a good chance Q*Bert will respawn and take another jump, losing a second life. 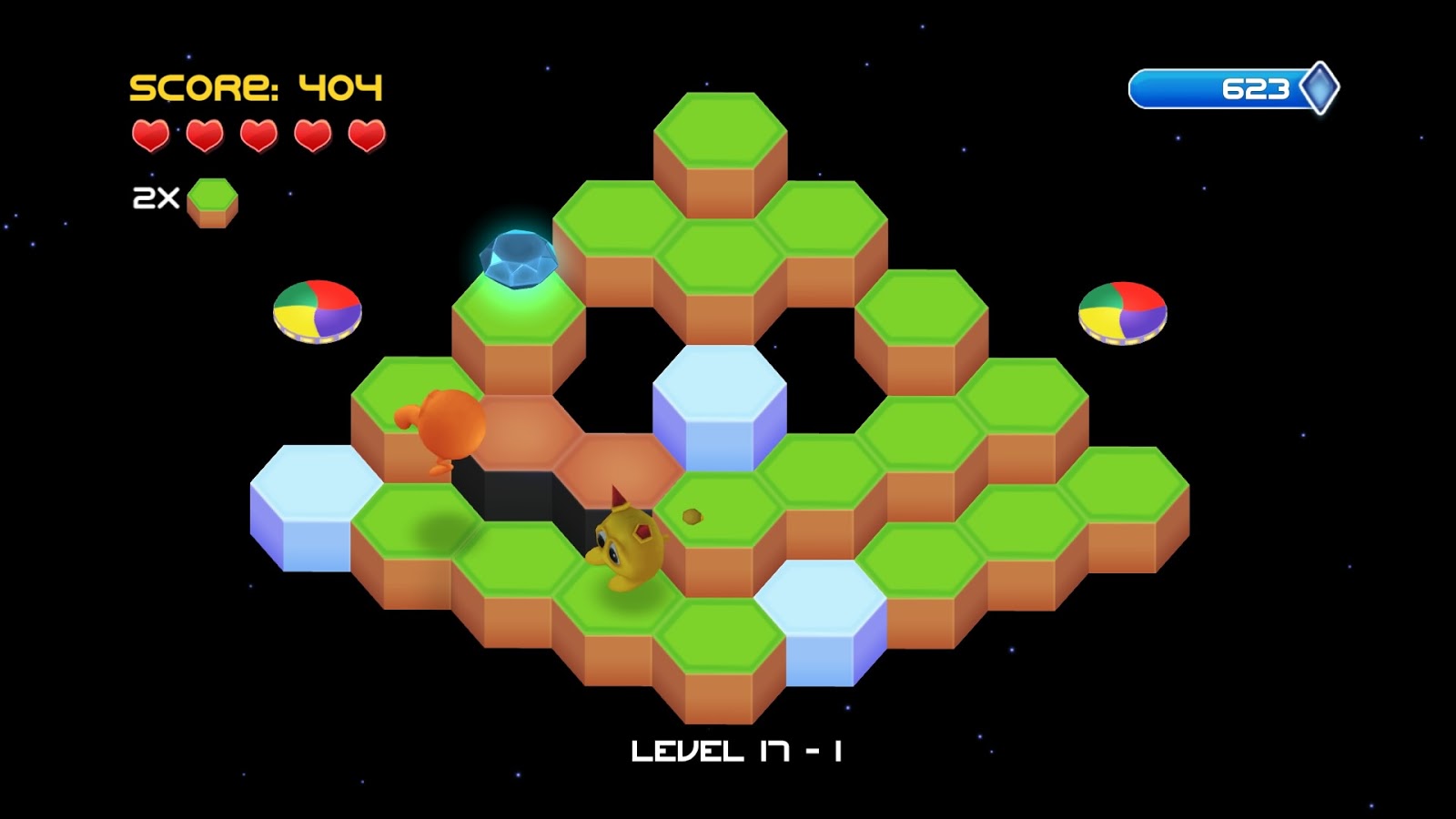 I like how the new version looks. It's bright, silly, and Q*Bert's updated design is good. The new enemy designs aren't great, but they're not a major distraction. There are a whole bunch of unlockable skins if you want to play as a robot or a dragon, and these require you to grind for gems scattered randomly in each stage. It really does feel like a cheaply made mobile game that would intentionally bore players to convince them to pay money to progress rather than grind. I'm surprised there aren't microtransactions included. 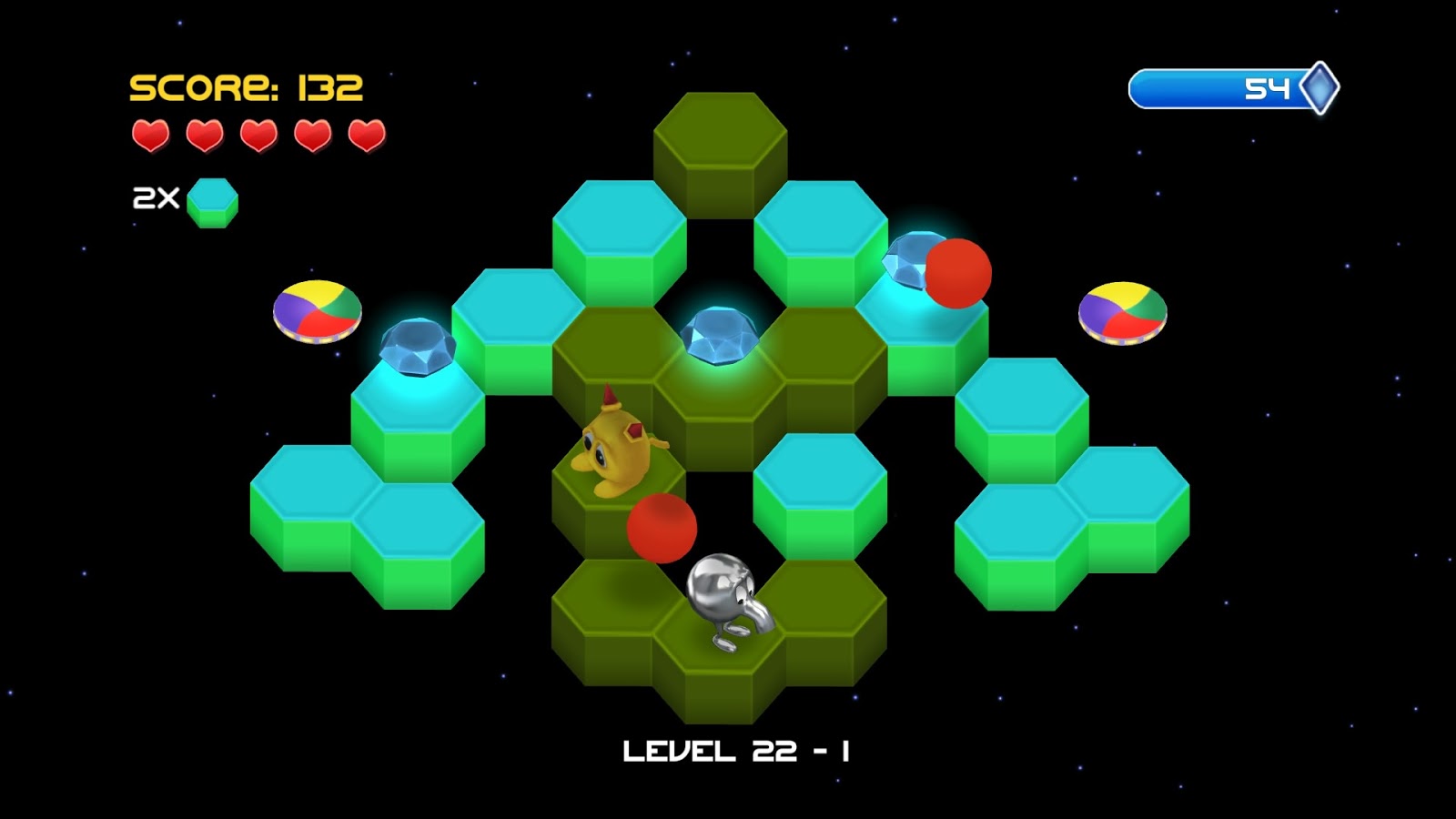 I really wanted to like this game, but it reeks of laziness and uninspired design. I'm happy that the original's included, but the lack of score boards hurts it. Most of this game's issues could be addressed in a patch, but as it stands right now, it's not worth your time unless you've got absolutely no other way to play the original game.
Posted by surlaw at 11:59 PM