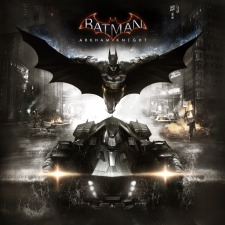 Rocksteady Studios set a new bar with 2009's Batman: Arkham Asylum, a title that showed that licensed superhero action games didn't have to feel like cheap cash-ins. With a small but expertly designed game world, bosses that functioned as puzzles, and rhythmic combat that flowed stylishly and felt like a genuine Batman simulator, Arkham Asylum was a great title that nailed what it was going for, up until an incredibly dumb final boss fight that's best ignored.

Two years later, Arkham City was released, giving us a larger, open world (at the expense of some of the first title's atmosphere), more great boss fights, more of the same satisfying combat, some awkward flying puzzles, and abysmally bad (and somehow award-winning) writing. While it improved as a game in many ways, Arkham City's genuinely bad dialogue left a bad taste in my mouth. I skipped the following game, Arkham Origins, a prequel that Rocksteady had no involvement with.

With 2015's Arkham Knight, Rocksteady returns and does something genuinely unexpected: This game provides a conclusive, final chapter to the series, taking some narrative risks and separating itself from the worlds of the Batman comics/cartoons/movies. The previous games always struggled to find the right tone, teetering oddly from silly to macabre with little grace, and while this title takes some obvious cues from other Batman stories, it very much feels like its own, confident story.


Unlike the first two titles, Batman: The Animated Series writer Paul Dini did not work on this one, with writing credit going to Martin Lancaster, Ian Ball, and series director Sefton Hill. This was a good choice; this game has the best writing in the Arkham series by a long shot. That's not to say it's astonishingly good; there are some cheap twists and some awkward choices to undo dramatic consequences, but overall, it's a big step up. In spite of the Mature rating (in comparison to the Teen rating on the previous games,) Arkham Knight tries a lot less hard to appear "adult," and does not rely on the same sort of dumb edginess found in City.


The one brave, gutsy choice Arkham City's writers made was killing off The Joker at the end of that game, a decision that helped make Arkham Knight as effective as it is. Joker was dying of a horrible disease, infects Batman to force him to find a cure, Batman cures himself, lets Joker die. Years later, guilt over this event still haunts the ever-brooding Batman, who finds his city under attack by two coordinated forces: Scarecrow has returned and threatens to blanket Gotham City in Fear Gas™ while the Arkham Knight, a mysterious cyborg ninja with a personal connection to Batman (bringing the Metal Gear Solid tone/references established in Arkham City full circle) rampages around with an army of PMC soldiers and unmanned drones.

The Arkham Knight himself isn't that interesting; his identity is basically announced to the player before you actually learn it in some of the bluntest foreshadowing I've ever seen, and his plans don't have much weight behind them beyond "I really hate that Batman and want to make him mad." Scarecrow is more fun, and the game opens with a first-person encounter with him, as players control a nobody cop visiting a Gotham diner. It's a wonderful, spooky intro that works well. The city is evacuated, criminals and militia run wild, and Batman is exposed to some Fear Gas™, bringing out his inner Joker.

By far the most interesting part of this game is the return of the Joker, who appears not in the flesh but as a ghoulish memory, haunting and taunting Batman throughout most of the game. This title spends a great deal of time playing up the Batman/Joker relationship as two sides of the same coin, with the Joker's school of gleeful murder just barely lurking beneath the surface of Batman's stern grimace.

The Joker is functionally a vocal version of Batman's id here, telling us how much Bruce Wayne secretly resents nearly everyone around him, longing to just cut loose and snap some necks. Batman needed The Joker to keep his own violence in check, allowing the Clown Prince of Crime to more or less live as a projection of his own issues and insecurities. With Joker dead, Batman's only half a man; it's no wonder he brings him back in his head to keep company.


There's some dumb comic book science behind all of this, but I'm not interested in that. I dug their love/hate relationship, and enjoyed having The Joker play the Devil on Batman's shoulder without having a real angel to play the other side. This was the meat of the game to me, not the silly (but ultimately harmless) Arkham Knight story line.


All that said: I'm lukewarm on Arkham Knight overall. While the writing is the best in the series, the visuals are great, and I genuinely love being able to play the whole thing dressed up as Adam West's Batman, the game play takes a very noticeable step down from Asylum and City.


Hand to hand combat is more or less the same, with the addition of some Team Up moves in the rare events where you get to fight alongside Catwoman, Robin, or Nightwing. These are cool fights; I would have enjoyed more of them. Your gadgets are mostly the same, you've got the same combos, and if you've played the other games, you'll do well. If you haven't, it doesn't explain the mechanics very well and assumes you're already familiar.


The biggest addition is the Batmobile, which can transform at the press of a button between car and tank modes. With slippery controls and streets that often feel unsuited for driving, traveling in the Batmobile is often an awkward experience, especially in the missions where you have to chase enemy cars/tanks down and disable them. You can also run over and shoot missiles at passing bad guys; the game reassures you that they're all just "stunned." Sure thing, Bats. When in tank mode, players fight against dozens of drones, which politely show you lines showing exactly where they're going to shoot so that you can safely move out of the way. The resulting battles are a series of slowly navigating between colored lines, rather than anything that feels like intense combat.


I didn't hate the tank battles, but they're about as mediocre as you can get. I did, however, hate the game's timed races, but they're largely optional. For some reason, The Riddler challenges Batman's intellect by... building a series of underground race circuits? They're awkward, ugly, and just no fun at all, but I did all of his awful missions (including a terrible one where you have to launch out of your car and glide between tight spaces) because I wanted to see a resolution to Riddler and Catwoman's stories; the game then denied me of this, telling me to go into the city and collect nearly 250 doodads to proceed. I refused and left this portion unfinished. Don't ask players for this kind of trashy item collecting to progress a story, even if it's a side story!

The other problem here is the game's biggest: Gone are the numerous puzzle-based boss fights of the past games, replaced with some car chases, some head on vehicle fights, some stealth-based tank missions, and villains being taken out in a cutscene followed by fights with generic goons. You introduce Harley Quinn with her own unique gun and baseball bat and give her her own optional introduction chapter and then have Batman defeat her in a cutscene? Two-Face's encounter is identical to a generic gunner enemy? You chase Firefly in your car until time runs out and he falls over on his own? Three times? How does this happen?


There are a couple of boss fights; you get to take on the Arkham Knight in his own cartoonishly large tank, navigating a series of tunnels and luring him into traps. This fight was good! Your hand to hand encounter with him involves multiple phases of expert stealth and infiltration. This is also good! So where are the rest of the boss fights? One of the most well done elements of the previous Arkham games is almost completely abandoned here, and it's inexplicable. There were four years between City and Knight; did all of that time get spent on visuals and icy car physics?


Ultimately, I had fun with Arkham Knight, even if I was incredibly bitter that the true ending was locked behind insulting, pointless doodad collection (thankfully there's Youtube.) The Joker stuff is so good that it's easy to overlook the fluffier parts of the story, and the writing is finally paced well and discards City's dumb edginess. The changes made to the game play can't be ignored, though; when it comes to scenario design and clever objectives, we went from the wonderful Arkham Asylum to the average levels, well above average bosses of Arkham City to the overall subpar-to-average mission design of Arkham Knight. The game is rarely actively bad (Riddler trophy collection requirements, the race missions) but it's very padded with mediocre content that doesn't live up to its legacy, never hitting the high points of its predecessors.

I'm impressed that they had the guts to close the book on this story, but disappointed that we'll never get a Rocksteady game with the writing of Arkham Knight, the level design of Asylum, and the boss fights of City.