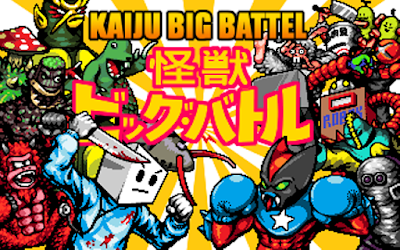 We're very happy to (re)introduce Kaiju Big Battel: Fighto Fantasy! With graphics by Soda_piggy and music by Glock & mr8bit, this title is a turn-based RPG that brings the giant monsters of Kaiju Big Battel into a 16-bit role playing world along the lines of the SNES Final Fantasy games.

Designed for Kaiju fans and newcomers alike, Fighto Fantasy takes American Beetle, Silver Potato, and more on a quest through time and space as they work to undo damage caused by the evil Dr. Cube, who has begun rampaging through history. With seven main playable heroes (and a secret one to unlock), players explore six time periods and punch out dozens of deadly monsters.

Keep watching the Super Walrus Land Facebook page for more updates! If all goes well, we're aiming for a late 2016/early 2017 release on PC and Mac, with an Android release to follow. We'll need your help with some votes to get the game on Steam once the time's right!
Posted by surlaw at 11:46 AM