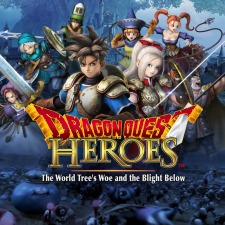 The Dragon Quest franchise has had a bit of a rocky history outside of Japan, where it remains colossally successful. Dragon Quest X, a high-profile online RPG for the Wii, Wii U, and PC, never saw an international release, nor did the first or the third installments of the Rocket Slime spin-off series (the second installment get an international release on the Nintendo DS and was quite fun.) 3DS remakes of Dragon Quest VII and VIII have sat in translation limbo too.

With all of this history, I definitely wasn't expecting Square Enix to bother releasing Dragon Quest Heroes over here. While the Playstation 3 version of the game was left behind, SE did indeed choose to localize and release PS4 and PC versions, even if it took eight months from the Japanese release.


The new title is designed by Omega Force, the Koei Tecmo subsidiary known for the dozens of Dynasty Warriors games and spin-offs that come out every year. With Square Enix's supervision, Dragon Quest Heroes is, thankfully, a quality title, with high production values, wonderful art, and smooth, if repetitive, game play. This isn't a cheap cash-in like Omega Force's dire Fist of the North Star titles.

Dragon Quest Heroes: The World Tree's Woe and the Blight Below (the best subtitle of the year) is a simple brawler where players bash through hundreds of enemies per stage, while swapping between one of four active heroes. Most of the numerous heroes (largely taken from previous Dragon Quest titles) play differently from one another, so it's easy to swap out and try something new if you're getting a little bored, and the game's tower defense-style elements add a nice layer of strategy. After defeating monsters, players sometimes receive medals which can be used to summon those same monsters as allies, placing them at strategic points to defend crucial locations and characters while enemies march relentlessly from their spawn points. I'm not normally a tower defense guy, but using base elements of the genre and mixing it in with very fast, very active action-combat is a nice formula that works well.

The game's bosses are huge and fun to fight, shifting focus from hordes of foes to one or two big deadlies. The best fights, by far, are the ones where players fight one on one battles with no allies and no lesser enemies, with all focus on careful dodging and timing. There are only a couple of these, which is a shame, because they're excellent fights.


There's a constant sense of progression here, with new skills, weapons, and crafting item unlocking regularly. The crafting system is the game's most half-baked aspect, and I mostly ignored it after a while. I appreciated that every trophy earned gives you a prize, making Dragon Quest Heroes one of the few titles where trophy hunting isn't just for personal satisfaction. The medals you earn can buy new weapons and accessories, though these items have a pretty high cost for the amount of damage they do.

Akira Toriyama's classic, cartoony art style has been a big part of Dragon Quest's appeal for me. I love his goofy, squishy monster designs, and I don't really care that he reuses a lot of basic design between all of his Dragon Quest and Dragonball comics and games; it looks nice, and it's 100% Toriyama. Dragon Quest's art has never been better than it is here, with bright colors and silly animations that bring these lovely monsters to life. Even harmless grunts like the hundreds of Slimes you'll fight are fun to encounter since they look so adorably dumb. Outside of the Souls series, monster design has been fairly weak in video games for the last few years, and Toriyama's old beasts, in spite of being originally designed in the 80's, still stand out as a breath of fresh air.

The story here fits the game's cartoon visuals; it's a light, fluffy adventure about the Power of Friendship, light vs. dark, and learning to love the weird people who drop into your life. It's very much a Saturday Morning Cartoon, and that's OK. It knows what it is and it sticks to its style and tone well, embracing the cornier parts of its writing earnestly. There are an absurd number of puns on display, but the game is never winking at the audience. It's a cornball story that isn't afraid to look dumb, and doesn't have delusions of being something else entirely. Sometimes it's good to have a kid-friendly story in a game that's actually fun to play.

There are only a couple of real marks against this game: A lot of the optional, post-story bosses and rematches are ludicrous damage sponges, able to take ten times more damage than they really should. These are hard fights, but hard in the wrong way, relying on long, repetitive skirmishes rather than tightly paced, fierce encounters. Thankfully the main game isn't like that, and is fun all the way through. The other issue I had was the clunky menu system which makes buying multiple items a repetitive pain, and since everyone wears the same armor items, you're going to be mashing through menus to buy four sets of the same items over and over again.

If you don't mind an easy (but not mindless, there are plenty of ways to screw up) brawler, there's a lot to enjoy in Dragon Quest Heroes. The main campaign is roughly 20 hours long, and there are over a hundred side quests: Some are uninteresting grinds, but many send you back into action against new enemy formations in familiar areas.


A sequel is due out in Japan in May of this year. Here's hoping we actually see it localized before 2017.
Posted by surlaw at 6:57 PM