Brief Words of Mouth - The Witch 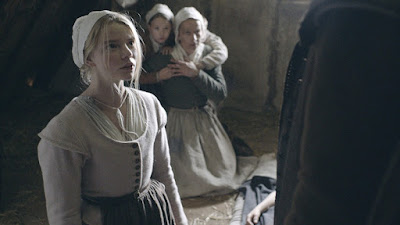 The Witch: Really well made horror movie with a focus on an uncomfortable atmosphere rather than dumb loud noises. Filmed extremely well, with some lovely, dreary, convincingly New England (but actually Ontario) countryside shots.

Anya Taylor-Joy's performance as the young Thomasina is fantastic. Everyone does a good job (including a pair of impressively irritating, awful young siblings) and it's amazing that this is director Robert Eggers' first film!

The focus here is on religious paranoia and insecurity, on top of an awkward coming of age story. What appears at first to be a Book of Job story (down to the family's mother explicitly calling herself Job's wife) takes a rather nutty turn in the final act which I'm still trying to digest. It may actually be an Anti-Job story. Also, the lesson here is that you shouldn't be rude to goats, it won't end well.