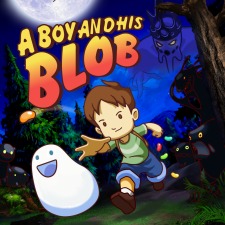 A Boy and His Blob, originally designed in six weeks in 1988 by David Crane and Gary Kitchen, was a mess of a game. When it debuted on the NES, it featured charming graphics, quirky music, and a relentless difficulty spawned almost entirely from awkward, rushed design decisions and slippery controls. It was the sort of game that deserved a second, more refined shot, but received only a largely forgotten Game Boy sequel. In 2009, Wayforward, known for their retro-revival games and cartoon licenses, revived the franchise with a remake on the Wii.

Seven years later, Wayforward's new take on the gooey hero has been ported as a budget, digital on PC, PS4, PSVita, and Xbox One. I'm a little sad that it didn't get a Wii U port, considering the game's origins. I was a big fan of the Wii version, so I was more than happy to revisit the game on PS4 to see how well it's held up.


Click here for A Boy and His Blob screen shot gallery

For those new to the series, A Boy and His Blob stars two unlikely heroes: A young boy who can just barely run and jump and a big white blob who can turn into a series of tools when fed jellybeans. In the NES original, players explored an open world, collecting treasure and loading up supplies before leaving Earth to save the wonderfully-named planet Blobolnia. The Wii remake follows the same beats, but with linear stages and a much more relaxed difficulty level. 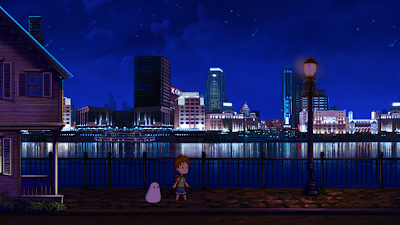 Each of the game's forty main stages has three treasures to collect, and each set of three the player finds opens up a new challenge stage. There's plenty of content here and the stages, with lovely, hand-drawn art, are a lot of fun to look at and explore.

When I played the Wii version in 2009, the game's difficulty bothered me a little; playing it in 2016, I find its design more frustrating now than I did then. It starts out patronizingly easy, with giant signs telling you which jellybean to use for at least half of the game's puzzles. Players only have access to jellybeans that they absolutely need in that stage, preventing them from trying creative alternatives. There are huge difficulty spikes during awkward boss fights, which the game does not feel suited to at all, and some parts of later stages are more demanding than they need to be. 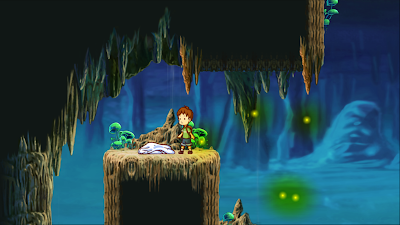 A Boy and His Blob feels like a puzzle game designed for children, which is more than fine, but with randomly placed difficulty spikes suited for seasoned gamers. There's nothing in the game worse than the blob's Hamster Ball Mode, which controls absolutely terribly, and its second boss relies on mastering the movement of this awful mechanic. In recent years, Nintendo's first party titles aimed at younger children, such as Kirby and the Rainbow Curse and Yoshi's Wooly World, have displayed perfect difficulty curves that make titles like A Boy and His Blob feel more awkward in retrospect. 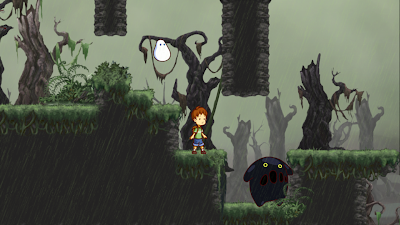 That said, this game is still immensely charming. The puzzles are fun when they don't hold your hand, the art style's lovely, and there's a dedicated Hug Button. The art looks a little blurry scaled up form the original 480p to the PS4's 1080p resolution, but the design quality is still top notch. Also worth noting is the almost total absence of load time during area transitions, something that could be bothersome back on the Wii. 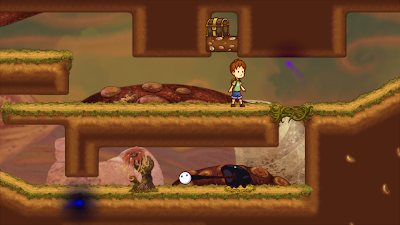 This is a pretty good port with a few issues, the biggest being the bizarre lag that sometimes pops up when players open their jellybean menu and find themselves unable to move their cursor for a second or two. I also noticed a few visual hiccups that I didn't remember from the original version, and fell through the ground and had to quit back to the main menu once. The camera has a horrible time following players during the blob's Rocket Mode, shaking all over the place as the player moves up and down, but this was a problem in the 2009 version too. Issues like this should have been fixed. A slightly more creative trophy list than "Complete all the stages/find all the items" would be nice too. Use trophies creatively, encourage players to try weird stuff! 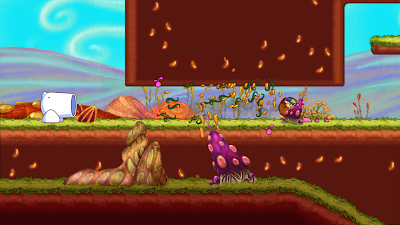 While I'm not as enamored with it as I was in 2009, Wayforward's A Boy and His Blob is still a solid game, especially for its current, bargain price. It's been surpassed by cuter, better controlling games with smarter AI (almost entirely from Nintendo,) but if you haven't played it before and are OK with a game only rarely respecting your puzzle solving abilities, A Boy and His Blob is worth checking out, if only for the chilled-out atmosphere and great artwork.
Posted by surlaw at 8:07 PM

Email ThisBlogThis!Share to TwitterShare to FacebookShare to Pinterest
Labels: a boy and his blob, PS4, reviews