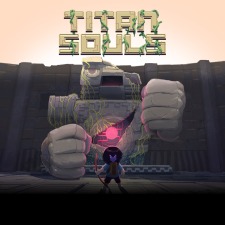 At a glance, Titan Souls is the kind of game I'd expect to love: It's a passion project by a small team, inspired by Shadow of the Colossus and Dark Souls, with nice art and pretty music. The game play is distilled to only one element: Fighting boss battles. I love the idea of just focusing on one single component of a game and nailing it, so the idea absolutely appealed to me. By the time I'd finished (my first run took me an hour and 45 minutes), I was left completely unsatisfied and wondering why it simply didn't work for me.

Titan Souls, originally released for a game design contest in late 2013, features a unique concept underneath its obvious inspirations: Both the player and (most of) the boss monsters die in one shot, and battles are fast and furious. Players can fire a single arrow that must then be retrieved, and each boss is a puzzle in which the player must figure out how to survive while identifying the weak point. In most cases, it's obvious; the boss will have a tiny bright/glowing point that you have to shoot. Some are more complicated, but for the most part, figuring out what to do isn't hard at all, the challenge is executing precision shots with split second windows of opportunity. 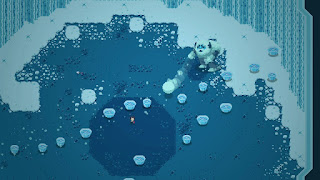 After clearing the first four bosses, players are free to take on the remaining batch in any order until they've unlocked the gateway to the final fights. You can skip a few if you don't want to deal with ones you find particularly annoying, but I ended up skipping two on accident because I never found them. There's no game play or story in between bosses, but there is plenty of walking, and it's easy to skip some areas on accident. That's fine in games like Dark Souls where exploration is a joy, and arguably the entire purpose of the game, but here, walking between fights feels like a chore. 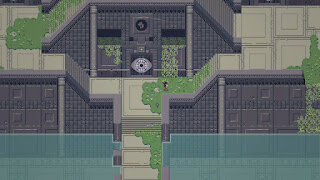 If you die (and you will, I lost 148 lives in my first run) you need to run across an empty area to get back to the boss, where the fight will rarely last more than a couple of seconds. Whether I won or lost a fight, they all ended quickly, none lasting even a whole minute. If you've got the reflexes and know what to expect, it's an incredibly short game; there's a trophy for finishing it in under 20 minutes. It would be even shorter with the padded walking removed, or if you could just instantly continue from the door to a boss room. Ultimately I was spending more time running to the bosses than I was fighting them, and in a game with minimalist graphics and little atmosphere, that's not good.

I found the one hit system fascinating but unsatisfying. With Shadow of the Colossus or Dark Souls, huge, difficult enemies and puzzle-bosses generally allow you enough leeway to get into a groove and really learn the fight. If you're patient, and careful, you can stay safe until it's time to make a move. There's none of that in Titan Souls, and the first time you encounter most of the bosses you'll die to their first move before having any idea what's going on. A lot of my victories felt less like careful planning and more like luck because of this. The ridiculous level of twitch reflex and perfect aim needed for some of these fights is just totally not fun, the worst being the fight against the regular final boss (as opposed to a secondary hidden one.) 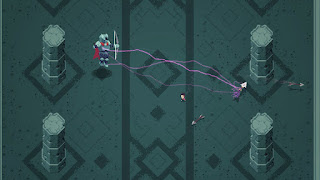 Like many indie games, there's a secret language at play here. Most boss names are hidden behind symbols until you've defeated the optional final fight and started a new game. After that, you get to learn exciting things like the giant stone boss being named Goliath and the brain in an ice cube boss being named Brainfreeze. It's a nearly story-free game, and nothing interesting is revealed with these names, so what's the point of even hiding them? Is it a "the hero is the real monster, attacking innocent creatures" story like Shadow of the Colossus? It's effective in Shadow because the concept is planted in the player early on, and builds up with each victory. It's a story of victory at all costs, and of committing monstrous acts in the name of love. There's no emotional release from anything in Titan Souls. And of course not every game needs a narrative, but this one's got just enough hints at trying to tell a subtle story that it's worse than just having nothing at all.

Titan Souls is not a terrible game. It's got style and controls well, and remains loyal to its concept from start to finish. It's just not for me. I don't enjoy the instant failures and instant victories, as both felt hollow. I don't enjoy replaying games for speed and low death counts, so I won't be going back to it. If you do like perfecting your runs of twitch-heavy action games, there may be a lot to love here, but for me, it felt like a lot of time I could better spend elsewhere, which is damning when the entire play through took less than two hours.
Posted by surlaw at 5:55 PM